HE IS RISEN - Happy Easter!
Mike and I went to a favorite restaurant in Maynardville.  It doesn't look like much from the outside.  Or from the inside, for that matter.  And I always have a faint smell of grease when I leave the place... 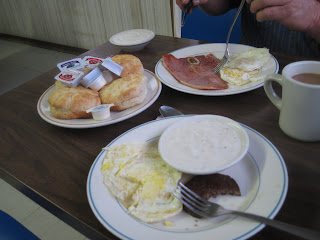 Kind of like smoke on your clothes after a game of pool at a local hangout...but I LOVE the 33 Diner.  We had a simple breakfast of eggs, sausage, ham, biscuits, gravy and coffee--and it was good!  It looks surprising like the few pictures of the place I took last time we were in town  :)

Mike and I took a drive up Highway 33 across the river.  They are widening the highway into four lanes and also widening the bridge. 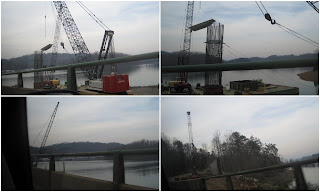 Mike is a crane operator but it is a different skill to be operating one to build bridges.  His company lays steel to construct buildings mostly.

Then we went back to Joan and Mike's house, got Michelle, Kayla and Noah and we all ran some errands. First we went to Wal-Mart, then Hammers 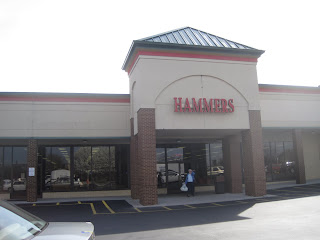 and finally over to Food City and the Dollar Store.  We picked up a $5 pizza at Little Caesar's for lunch.

Then we spent the rest of the day back at Joan and Mike's.  Pam and talked of taking out the TV in the basement so I did that. 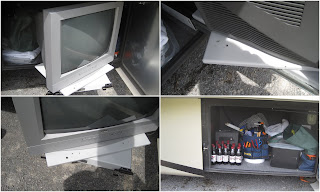 It is big and bulky and we hardly ever watch it so I took it out along with the sliding swivel tray.  It didn't take long to fill that space back up with things...

Next it was time for a siesta and a little PGA golf on TV.  I wish Phil Mickelson would get his game back.  Maybe he is subconsciously saving it all for next week at the Masters.   Later, Mike and I ran into the hardware store to pick up a bolt to fix the swing set.  We sat around a bit on a beautiful Saturday afternoon. 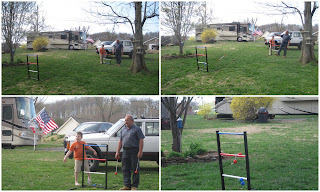 Noah and I played a few games of ladder ball, then Mike and Noah took a turn.  Before long, we sat down for a nice turkey dinner, with chocolate birthday cake.  Yum.  After dinner, we watched a little NCAA basketball.  Butler and Michigan State were battling in a great game.

I decided to go over to Michelle and Jeremy's, a few houses away from Joan and Mike.  Jeremy was in the garage and we talked for a while before we went inside and he dug out some old family albums.  He likes history and family history.  We saw that his granddad was in World War II and spent time in Normandy and Czechoslovakia.  Cool.  By that time it was time to return to the coach so I said goodnight. 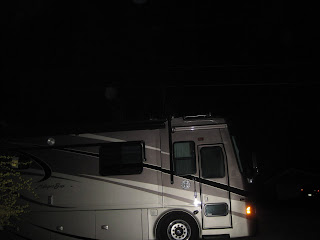 Pam told me Butler pulled it out in a close one with Michigan State.  We watched Duke and West Virginia go at it for a while.  We turned it off before half time with Duke well ahead.

That was our day in Maynardville--thanks for viewing view and hope you have a wonderful Easter Sunday.
Posted by Roadrunner Chronicles at 7:37 AM