Pam and I left Maynardville, TN yesterday about 7:30 AM.  I was up fairly early (about 6:00 AM) but I wanted to let Pam sleep some more.  Seems as if we don't get a great night of sleep sometimes the night before he hit the road again...

We wanted to hitch up and be ready to leave after Michelle brought Noah over to Joan's house.  Sure enough about 7:10 they arrived.  After hugs and a few words of goodbye we were on our way.

Maynardville, TN is down the road from Halls which is little community of businesses and shopping.  And it has the nearest Wal-Mart.  We drive to Halls all the time when we are in Maynardville.  This morning it was a traffic jam and we had never seen one at Halls!  No problem, we were not in any rush so we eventually made it through there and connected with I-75 and headed north.

The weather man was right -- we were in for some rain. 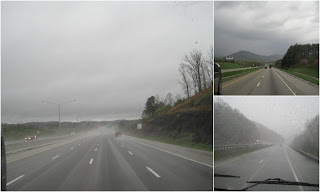 It wasn't too bad and I enjoy driving on I-75 more than I did on I-10 through Mississippi and Louisiana.  It was not as busy.  After a couple of hours I pulled over and Pam drove.  That was great!  (And I am getting pretty good at making sandwiches for lunch.)

Right before Cincinnati, it was my turn to drive again and Pam snapped some pictures as we entered into Ohio. 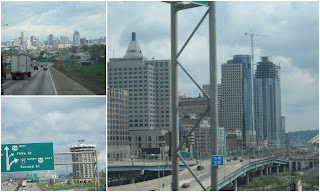 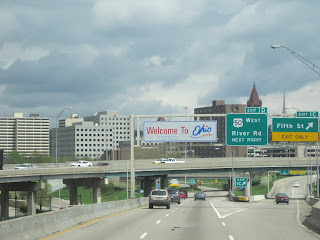 It wasn't long before we reached our designated stopping point--Dayton (actually Fairborn, Ohio) and Wright-Patterson AFB. 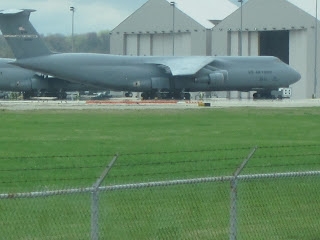 We found the gate and wound around the runway to the FamCamp. 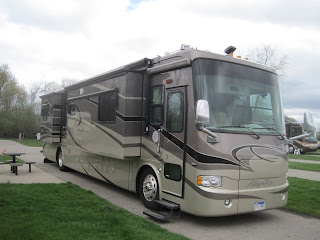 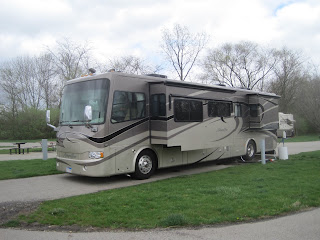 It looks like a nice campground with full hookups and paved pads.  There is also plenty of space between sites.   The weather is a bit cool and the campground is about 25% full.  I think we are going to enjoy this for a few days.  It is also on Bass Lake so we will probably check that out.

It was a pretty quick setup but not without issues.  I remind myself not to get too familiar with things or careless because that is when problems can jump up and bite you.  I got bit yesterday.  Seems as is 'someone' had left the grey tank lever open so when I removed the cap on the tanks I had residue pouring on the ground before I could shut it... yech...

As in most cases when I think 'someone' else did something---it almost invariably is ME!  So I was upset with me and not enjoying cleaning up that mess.  But it only took a few minutes.  I had to unhook the hose and pull out the grey hose and spray everything down and wash it away.  I keep spray bottles of diluted PineSol and bleach just to put the final touches on those episodes.

It was still mid afternoon and were able to catch most of the Masters.  I am glad Tiger Woods is back and hopefully he will get his personal life squared away.  My guess is that it will take years-- but he appears to be headed in the right direction.  Getting his golf game in shape seems to be fairly easy by comparison and he quickly proved he can pick up where he left off 20 weeks ago.  I am hoping for the best for him.  I hate to see another sports hero crash and burn...

My favorite is Phil Mickelson and he had a good day.  I also like Sergio Garcia, Mike Weir, current British Open Champion Stewart Cink---as you may surmise I am a big fan of the sport.  It can be a very cruel sport though and it is hard on some of those guys.  You wish they all could do well.  I am also a David Duval fan and he has had his personal demons to conquer.

Pam got into the cleaning mode and did (as she put them) some 'pink' jobs in the bathroom and kitchen.  Then we had spaghetti and salad for dinner which was great.

We get questions asking what we think about this lifestyle after 10 months.  We love it!  It provides a sense of adventure and we look forward to seeing more friends and family all the time.  It gives us flexibility (freedom) we have never known.  For example, we are making our way up to the Detroit area to be near Adam.  We miss Kelly but got to be with her last week.  We like those options.

We have no idea where we want to 'retire' but for now and the foreseeable future this lifestyle is fun.  Some ask if our crowded quarters are a problem.   So far it is not crowded.  It can be when we have our kids staying with us but that is temporary and not an issue.