Yesterday it was a beautiful day here at the campground and I was inspired to clean out the basement.  I don't know what caused that but I thought I'd better get on it while I had the 'feeling'.

In our almost 11 months of full-timing I had never taken everything out of the bottom storage area.  But yesterday that is what I did. 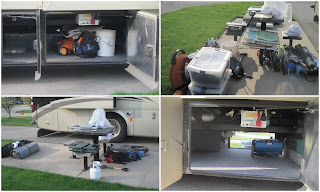 I didn't find any surprises, but confirmed where a few things were and I was able to condense items and seemingly add some space. The biggest thing I was able to do was to take a vacuum to the whole area and give it a good cleaning. 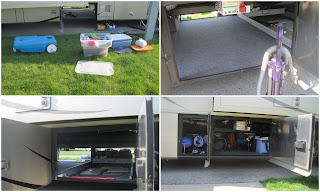 Another item I cleaned out was the Blue Boy - our small black tank on wheels.  I figured it never hurts to flush those out even though we haven't used it in months.

Before I finished, neighbors Vince and Jerry stopped by and we talked for a little while. 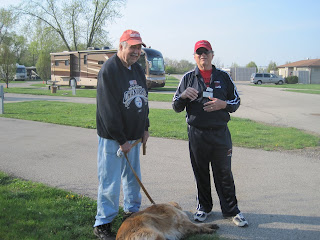 I was in no rush and was able to get the basement done shortly after noon.

A little after that second cousin Britten came over for a sandwich.  He is the youngest soon of cousin Ron.  Ron and his wife Ginger live just outside of Cincinnati.  More about then later.

Britten is a fairly recent civilian employee over at Wright-Patterson AFB and is a weapons procurement specialist.  We had never met, although he and I are FB friends.   :)  I gave him a quick tour of the coach and we sat down for lunch outside since it was such a beautiful day.  (Pam was taking the picture). 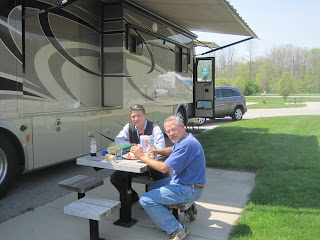 He loves his job and it loves him.  He is a doing very well and is moving up the ranks quickly.  He is a very bright and nice guy and we greatly enjoyed having the chance to meet him.

Next we called his parents and confirmed out earlier dinner time at their place.  They live in a nice neighborhood and have a beautiful large home.

And they have a wonderful back yard complete with a large (really large) pond and a swimming pool up on top of the 2/3 of an acre.  So we spend a good amount of time conversing on their back patio enjoying the beautiful evening. 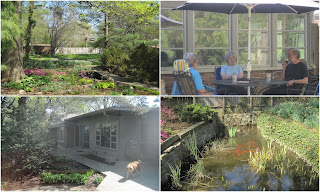 We had not seen them since they came to see us in Fairfax, VA many years ago.  They are both retired and enjoy gourmet cooking and wine tasting.  Ginger also has a loom and it has seen some action over the years. 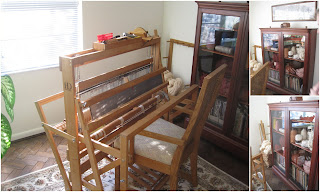 We enjoyed a great time with the meal and the getting to know them some more.  Ron was a principal scientist with Procter and Gamble and retired about 3 years ago.  During his career, they had a stint with P&G in Italy and have a fondness for the culture and that county. 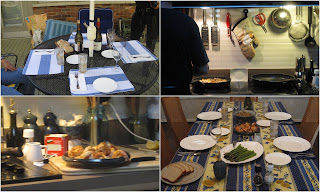 We talked about those times and other things as we enjoyed a wonderful dinner of shrimp, asparagus, fancy rice along with a couple of types of wine.  We topped it off with Ginger's famous Key Lime Pie for dessert which was outstanding. 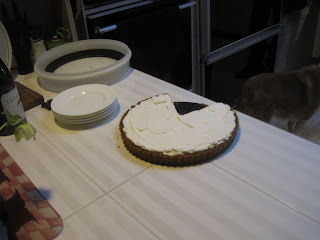 And then got a group shot before we left. 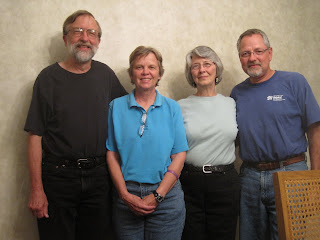 It was fun seeing them and they are great hosts!

We got home about 9:30 PM and stayed up a little bit before we went to bed.  Pam checked out the baseball games and I  updated security patches on my work laptop.  I also got to chat on FB with favorite daughter Kelly.  Today we leave WPAFB for Algonac State Park and will be in favorite son Adam's neck of the woods.