New Tires and such

It was another beautiful morning and I was out walking early.  The lakes are quite nice at that time of the day. 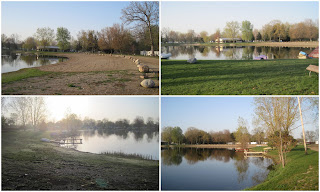 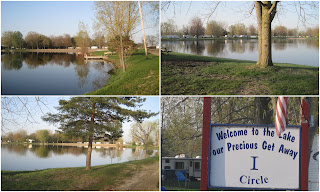 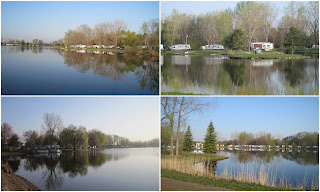 I have been walking more and there are plenty of 'trails' around the park to hike and of varying distances. The season doesn't start up here until May 1, so I expect it will still be a few days before people come and open up there RV's that have been buttoned up all winter.

On a different subject, we have had a strange sound in our new car for a number of months and decided to see if we could get it fixed.  In a previous post, I mentioned that the tires had only 15,000 miles on them.  I forgot to add the additional 16,000 miles they have traveled as a toad (towed vehicle) behind the Roadrunner.

Still --- 30,000+  miles is not a lot of miles on new tires.  I understand new cars sometimes don't have the highest quality tire on them but I was not excited about spending $600 on a set of new tires.  But that is what I did and we got some Michelin's.  We ordered them at Sam's Club and went over on Wednesday morning to get them mounted and balanced.

To my amazement the 'wubba wubba wubba' sound disappeared!  I could not believe the difference the tires made but we are very excited that it fixed!  Now to get them aligned and we'll be 100%...

Sam's Club is not far from IKEA so we went there again to see if there was something we couldn't do with out.  Sure enough-- we found a good sized squeegee for $1.49.  Now I can wash the front windshield on the Roadrunner a little quicker.  The one I have is a about 6" wide.  We also bought another clothes drying rack that is metal and will fold up easily.  At $1.75 to wash a load of clothes, we may be drying a lot of clothes outside.

We also went by Camping World and returned the 4" drop hitch that we bought there last week.  We have a Blue Ox towing system.  Camping World had a pretty good looking Roadmaster drop hitch and I got that.  When I installed it however, it was not a very snug fit.  I didn't like the idea of the toad swaying some so I took it back.

We went back to General RV Center and picked up the first 4" drop hitch we looked at.  It is a Blue Ox brand fits a lot better and I think that will also help the wear on the new tires.

After that, we had lunch and took a drive to get used to the area and got back to the coach in time for a quite dinner and some TV.