We have been seriously looking at motor homes and fifth wheels since August 2007. We have narrowed it down to four or five models with Monaco Knight or Holiday Rambler Ambassador models at the top of the list.

Both are made by the parent company Monaco which is located in Elkhart, Indiana. Pam was able to take a couple of days and go there to their main plan and take a tour. (We will save that for another post.) 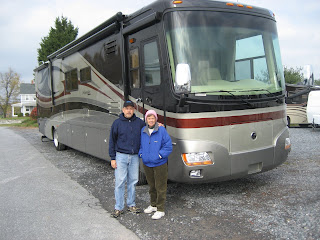 This the Holiday Rambler Ambassador at the Endless Summer RV dealership in Frederick Maryland. It is about 90 minutes from where we live.

The owner, Tom, was nice enough to spend a couple hours with us as we inspected the 2008 400cc diesel pusher. We were able to take it for a test drive and it is nice! It handles very well and I felt fairly comfortable driving the 40' after about 10 minutes. More importantly, so did Pam. She also got behind the wheel and also did some test driving.

The first thing we decided on was the whether or not we wanted a gas or diesel coach. We were considering a gas model but determined the torque and power of the diesel would be the best value for us. We intend to tow a vehicle and probably will spend a lot of time out west in the mountains, so we want the power.

These babies get 8-10 mpg. (Usually closer to the 8 mpg.) Anything more than that is a bonus but 8 is a good planning factor. 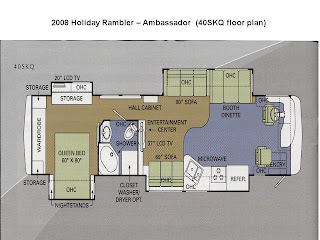 The floor plan is very important to us. Many of the coaches have the TV hanging between the driver and passenger seats. I think it would be a little strange to be parked somewhere with the curtains drawing (around the inside of the windshield) watching TV. Instead we like this model that has the TV/Entertainment center at the other end.
Notice the four 'slide outs'. After we stop and set up, four sections of the walls 'slide out' to give more room. Pretty ingenious invention in the last 15 years. 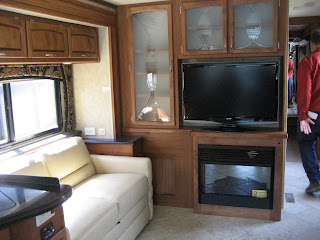 Believe it or not, under the TV is a fireplace. It is an electric model that actually produces heat and makes it a little more cozy. I was interested to know if the heat will affect the TV but again, this is a feature they have engineered pretty well in a lot of motor homes and fifth wheels. 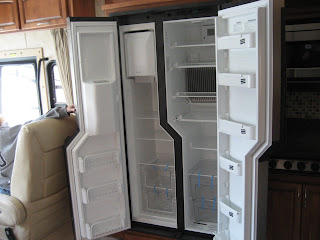 Another feature that is becoming popular is the refrigerator located up front. Being able to get a drink without going all the way to the back will be nice. This model has a fairly large refrigerator but it is still quite small from conventional standards. But most things are in the RV. We are moving from 2200 square feet to about 400 square feet and a lot of things are smaller. 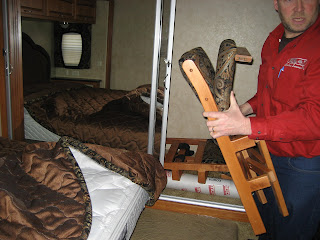 This is Tom back in the bedroom. He is showing us how the kitchen table chairs can be folded up and stored back in the bedroom or elsewhere. The bed has a little bit of storage underneath. Of interest is the bed--it is a queen size bed. Most models carry that size although a king size is usually optional. However the king size is considerably smaller than a regular king size bed.

Pam and I got rid of our king size bed two months ago and went back to a queen size so we will be acclimated to it. There will be plenty of other things to get used to when we start living in this.

So here is a start on some of the features we are looking for. More pictures to follow, but I wanted to give an idea of what we are currently thinking. This model of a Class A motor home is something we think will work well for us.

Posted by Roadrunner Chronicles at 4:38 AM 2 comments: