We were in Richmond VA at the Atlantic Cummins shop earlier this month to check out our 'cold start'. 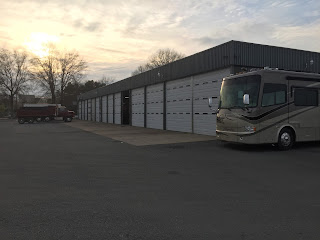 We scheduled our time here to check out our starter.  At times, it is sluggish even after preheating the engine overnight.  We have new chassis batteries, so we were thinking it may be a starter or a solenoid or a charge issue with the inverter or??

Really not sure but we wanted to check it out instead of just crossing our fingers.

The set up here for staying overnight is fine.  Completely adequate but nothing fancy.  It got us to think about where and when we have parked overnight and stayed in the repair shop parking lot.  We have done that a few times.

For the fun of it (and for curiosity sake) I decide to look back over the years and note when we had actually done that:

October 2009 - Freightliner, Dallas TX
This was our first experience getting towed outside of Waco, Texas.  Replaced a fuel pump and stayed in the coach overnight at their new facility.  It had 50 amp service and was a brand new facility. 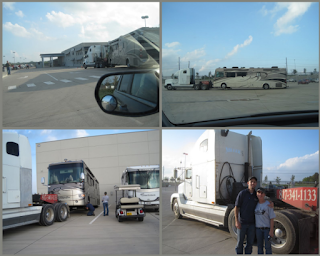 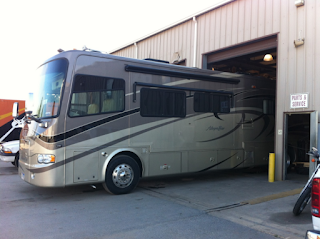 We stayed at the Ft Benning Army Recreation Center RV Park in Destin when we saw a leak.  We were able to drive it over to Fort Walton Beach.  They had to replace gaskets and other stuff and let us stay in the coach.  We were able to plug into a 50 amp circuit and left later the next evening.

October 2012 - Freightliner Factory Service Center, Gaffney SC
We attended the Camp Freightliner course and were able to stay free at one of the campground sites at the facility.  Had full hookups and internet. 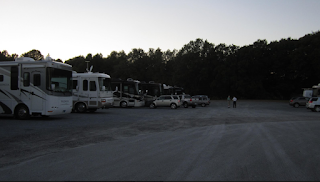 July 2013 - HWH Factory, Moscow Iowa
Broke a foot on the rear jack and had it replaced.  Also replaced the electronic keypad on the driver's console. Parked in one of their free sites (W/E, no sewer). 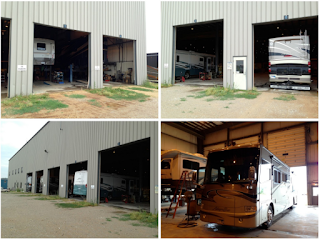 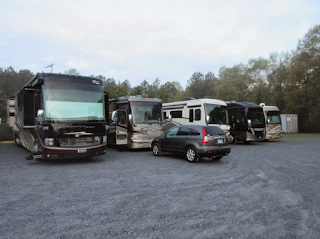 August 2015 - Bay Diesel, Red Bay AL
Roadrunner was 'chugging' going up hill.  It was a tough one to diagnose.  The mechanics worked on it all day and we stayed overnight parked in front of one of their bays.  They hooked us up with 50 amp.  Finally, after they changed a fuel pump and it was still doing it, Chris Thompson got us an appointment with the Cummins folks at MHC in Tupelo.

September 2015 - MHC Kenworth, Tupelo MS
Changed out two more fuel pumps before they figured out it was the fuel line to the gas tank that was causing the issues. Was able to stay a few nights parked outside the rear bay but hooked up with 50 amp electric. 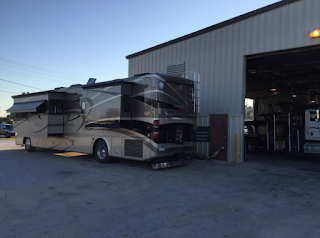 May 2016 - Custom RV, Vina AL
Stayed out front of Brannon Hutcheson's shop.  Had a sheared bolt on the front DS which he replaced plus a number of things on our list. 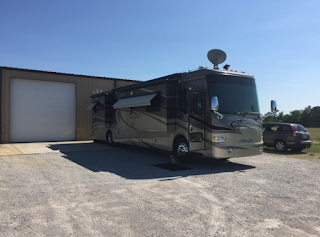 August 2016 - Cummins Northwest, Portland OR
Time for yearly service on our fuel filters.  Stayed overnight in one of their eight full hook up sites at their Coach Care facility. 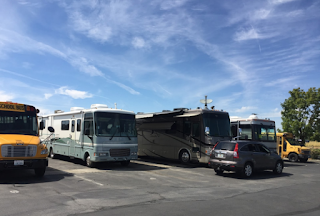 August 2016 - HWH Factory, Moscow IA
Had a broken chain on our PS slideout which we got repair there.  Stayed overnight in one their small but adequate campsites with 50 amp/water.

December 2016, Cummins South, Ocala FL
Made an appointment to have them check out why the Roadrunner seemed to start so slow.  They determined we needed to replace a couple chassis batteries.  Stayed one night with 50 amp/water.

February 2017 Atlantic Cummins, Richmond VA
Wanted to check out if there was an issue with the starter or solenoid.  They troubleshot as best they could but determined there was no issue.  We were OK with that and liked their customer service.  We stayed overnight parked outside one of their rear service bays with 50 amp service.

Surprisingly, that is about 12 times that we have parked overnight (or for a few nights) outside of a repair facility.  Seven times the business had a parking spot/camp site with hook ups, the other five times, they had a 50 amp electrical outlet we were able to plug into.

Though it is not my favorite way to spend the night, it always has turned out OK and been part of the intrigue of this adventure!