Blessed to Be Back in Virginia Beach

We arrived back in Virginia Beach last week and are at Dam Neck Annex Sea Mist Campground. Our time here has mainly been spent on spending time with grandson Brooks! 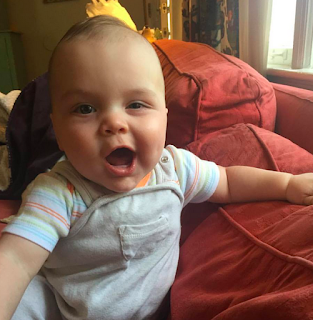 At seven months old he is doing great and a wonder.  We are learning the grandparents thing and loving it.

We haven't been over at daughter Kelly and son-in-law Jon's place everyday but almost.  And we are helping with things around the house as well as taking turns with Brooks.  Nothing like a few hours at a time with that little guy to get a dose of pure love.  He is pretty fantastic!

I love it now that he recognizes people and smiles and coos and yells and crawls around.  Half the time I think he is going to raise up off the ground and start running.  Then we'll all be in trouble.  He can be exhausting.  But I am not telling anything new to you grandparents or new parents out there.  I also notice my arms and shoulders are sore.  Twenty pounds is plenty to be toting or lifting around.

We are close by to the beach.  We listen to the waves hit the shore over the sand dunes 100 yards or so away.  We are loving being near the beach again and Pam tries to go for a walk each morning. 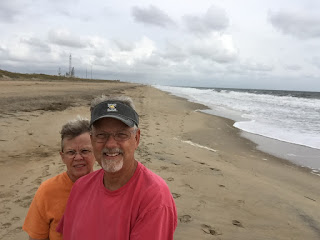 Its a little breezy here today and a overcast at times, but nice fall weather.  A couple of days ago, I got my bike out and took a ride down to Oceanfront and the boardwalk.  Not sure what bridge is near 5th Street, but I took the first two shots near the top of the bridge. 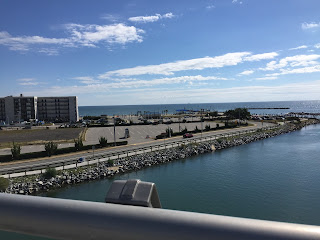 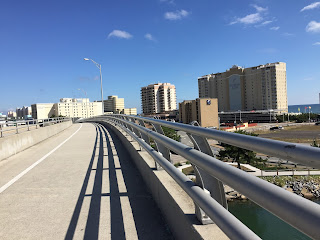 Then I got down to the bike path and enjoyed it for a while. 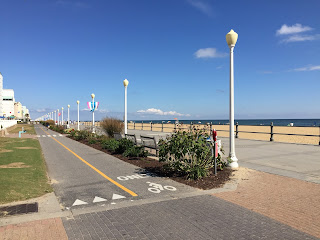 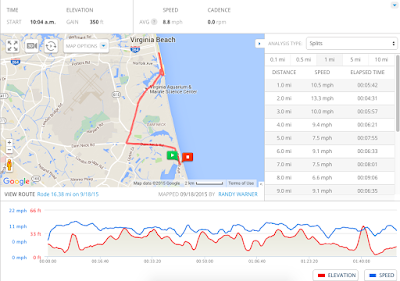 Last week Nassar and I got together and played a round of golf at Stumpy Lake Golf Course.  We walked 18 holes and it was great.  Even had a few nice shots between us.  But the more interesting part of our time together was sharing stories of life on the road as full timers.  We last played golf together about 5 years ago with a mutual friend.  At that time Nassar and his wife were on the verge of retiring and getting ready to fulltime.

They have two years of fulltiming and we talked and talked about stories and experiences on the road.  One word I remember him using time again to describe their take on it was --MAGICAL!  He said it more than once.  It has just been magical!

I got to thinking what word I would use?  Regrets? Mistake? Scary? -- Nope.

Or would I use words like:  Amazing? Blessed? Awesome? Yes.

So we are glad to be here and glad to be still doing this.  I am sure things are going to change somewhat but no big ones in sight.  The biggest change we've noticed recently is in our winter schedule.

We plan to be in Florida most of the time but will be coming back to the area a couple of times.  We will probably leave the Roadrunner at a campground and just leave it there and make the drive back to Virginia Beach around the holidays and again for Brooks' first birthday in February.

Since kids are back in school the campgrounds are a little emptier and it may be my imagination but I think there is an excitement building out there as folks make their winter plans and look forward to Arizona and Florida and seeing their snowbird friends!

I know we are looking forward to the next few months and maybe we will be able to see YOU!

Enough for now - thanks for joining us on the Roadrunner Chronicles!

Roadrunner Recap
At the beginning of August, we were in Maynardville Tennessee.  During the month, we moved on to:

We had an issue with the engine climbing up the hills into Red Bay AL.  We had the 'stumbling, loss of power' issue checked out at Bay Diesel in Red Bay AL.  We spent the night at Bay Diesel hoping they could fix the problem but then took their advice and moved down the road to let the mechanics at MHC Kenworth take a look at it.
We were there the first thing on Saturday morning but they could not successfully diagnose it in half a day.  So we opted to spend the weekend at the Campground in Barnes Crossing in Tupelo and went back on Monday morning.  Each night during the week we 'dry camped' in the MHC parking lot. Late Thursday afternoon they found the issue and we test drove it early Friday.
Later that morning we left Tupelo and a large part of our wallet and headed to Pensacola. 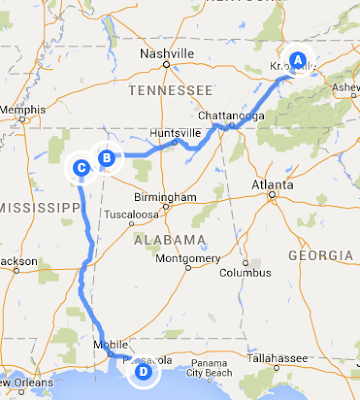 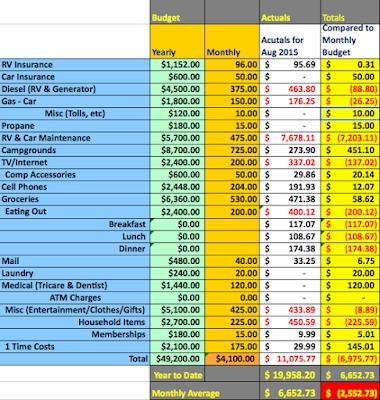 The only significant areas were under budget in August were in Campground fees and with Groceries.  We made up for it though with spending way over in Eating Out!

Biggest Expenses
Our biggest expenses in the month were for were in RV repairs and household items.

Large One Time Cost Item
The biggest cost was getting the Roadrunner fixed.  We spent money on diagnostics (trouble shooting @ $128/hr), two fuel pumps and misc items.  The bill would have been considerably higher if they had not taken pity on us and decided to bill two full days of mechanics labor to 'Supervisor Management' -- whatever that is.

Monthly Average
This month vaulted our monthly average from a little over $4400 to almost $6700.  I don't know if we are going to be able to recover and get anywhere close to our yearly target of $4100 but we will see. 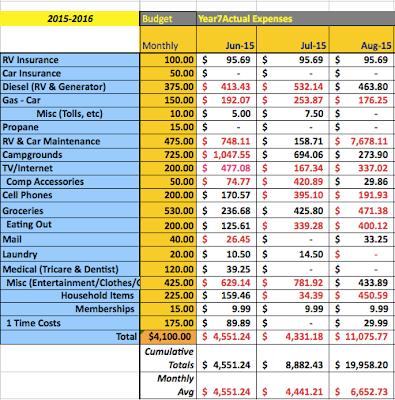 Time in Tupelo Getting Fixed

We spent a week in Tupelo MS getting the Roadrunner fixed.  Before that we spent a week in Red Bay AL which is the home of the Tiffin Motor Home factory.  I always like to go to Red Bay despite the cost.  To me, keeping up on maintenance is worth it in the long run.

We started out the week at the Allegro Camground and also had work done at Bruce Deaton's Custom Paint shop and Bay Diesel.  After our time at the Tiffin Service Center, we went over to Bay Diesel.  Our engine was stumbling/chugging coming into Red Bay going up the hills.  Bay Diesel replaced a lift fuel pump and blew out air from some of the fuel lines.

But after taking it out on a couple of test drives, the problem was not solved.  We spent the night outside of the garage at Bay Diesel and they decided the issue was beyond their abilities and scheduled up for a 7 AM appointment in Tupelo MS, about 65 miles away.

We got in to the MHC Kenworth facility early Saturday morning and they got right on it.  MHC has Cummins engine - certified mechanics and their diagnostic software was more extensive.

Although we spent the weekend at the 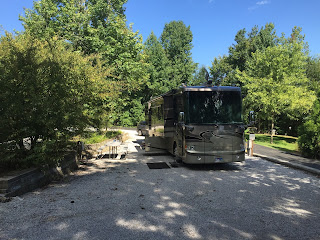 Campground at Barnes Crossing (and one night in the week to dump tanks), most of our time was spent at the MHC Kenworth facility. 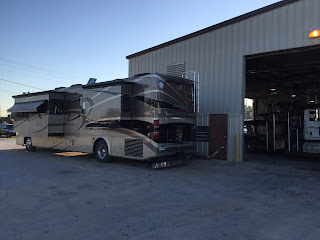 We got in early Saturday morning and Tommy 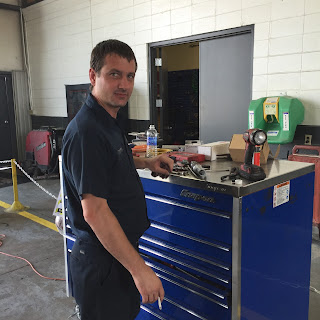 did some diagnostics and tests showing high pressure and low pressure issues.  We brought it back again on Monday morning and they began the long and arduous process of troubleshooting and eliminating potential issues one by one.

Another thing they did was check each injector 'pencil' and clean each one individually.  Next they checked the tightness on each injector.  I wish I could give more details, but I am pretending to know what he did for all the tests and analysis.  Each day it seemed as if the mystery grew a bit instead of narrowing it down. 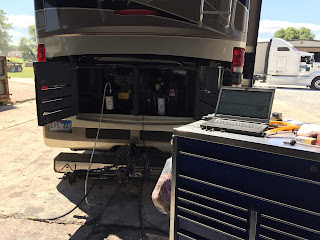 On Tuesday or Wednesday, a high pressure fuel pump was ordered.  We had the lift fuel pump replaced at Bay Diesel in Red Bay but it did not solve the problem.  Once the part arrived it was installed and tested.

We took it out for a test drive and it seemed better for a little bit, but the 'stumbling' and 'hesitation' persisted when I pressed the accelerator.  Hmmm.

We took it back to the shop and he decided maybe the main fuel tank was the issue and he tried to crawl under the motor home and see how to get at it.

Tommy pulled the main fuel line and 'blew it out' and indicated there was some debris.  Next, he installed some test equipment and we took it for a test drive. 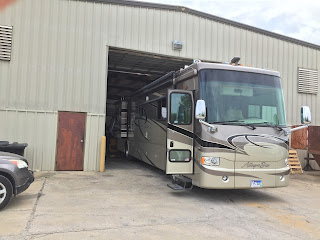 Problem solved!  How can that be??  Just like the whole issue began out of nowhere, it seemed the 'fix' came out of nowhere.  It was very anti-climatic. 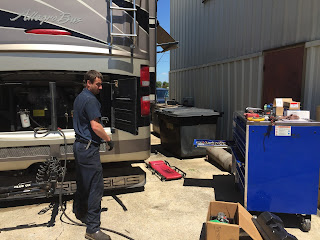 We had one other issue.  When Tommy was removing the test equipment, the piece he had removed broke off.  He order another part and it arrived Saturday morning.  Once the part was in, we took it for another test drive and all went well.

It was about 10:30 AM when we got out of there and we headed south for Pensacola!

It was another adventure in the maintenance facilty.  One I hope we don't have to repeat for a while.  In this whole process I was very impressed with MHC Kenworth and found out they have a number of facilities throughout the U.S.   We will have to add them to our list.