We met Roadrunner Chronicles' readers Bob and Terry at Bob Evan's restaurant for breakfast.  That was a fun way to start the day.  Bob was reading our blog and realized we were close by and asked if we could meet.  They are planning on full-timing the next 3-4 years and wanted to hear more about our experience. 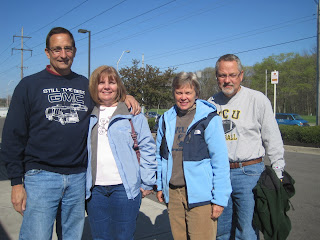 Bob works for Beta LaserMike as a sales manager for the Americas.  Terry is a successful realtor with Irongate Realtors, Inc.


Turns out they are already quite experienced RVers and they have a GMC motorhome.  I didn't know too much about GMC motorhomes before yesterday, but I think we may have seen some in Quartzsite in January.  They have GMC clubs rallies where they all gather and Bob is heading up the next one in this area.  You can google 'GMC 1970s motorhome' for more information.


We chatted for a long time and thoroughly enjoyed meeting them.  We should have taken the hint when the manager came back to see us for the third time and asked if how we were doing...  When we got there at 8:00 AM it was busy but not crowded.  By 10:00 AM, the waiting line was out the door! 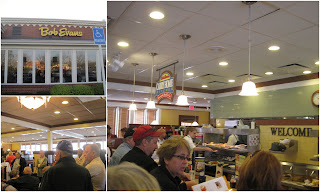 We sure our time together and hearing of their RV adventures over the years.  Hopefully we will meet up with them again sometime soon!


Next, Pam and I explored WPAFB.  What a BIG base-- and I think it has a bazillion gates.  All of which are closed on the weekend except for a few.  We found the one for the US Air Force Museum.  I had been here once before in the 1980's.  It has expanded dramatically and rivals the Washington DC Air and Space Museum.  It is fantastic.


Right near the parking lot there is a very well put nicely done memorial park. 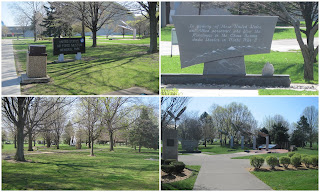 We just planned to find the Air Force Museum and go another time, but decided to run in for a minute.  ---About an hour later...we saw a few displays and put the rest of the museum on the schedule for Monday.


One display right near the beginning is a tribute to Bob Hope. 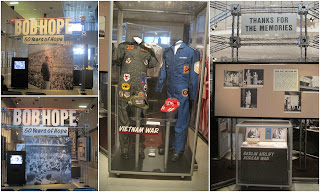 He sure made an impact with the troops.


We also found the base fitness center and came back to the Roadrunner for lunch and a siesta.   We watched some of the Masters golf tournament and were not disappointed.  Phil made back to back eagles!  And there was more great golf.  As you may know, I am a huge Phil fan (he also went to Arizona State...).  Talk about exciting golf!


Later I got on FB and found out Diane was going to be on base.  She went to the gym and then came by to see us which was a real treat.  We know her from Hawaii in the 1980's along with Rod and Lisa, Jon and Barbara, Joel and Roxanne, Brent and Betty and a bunch of other folks. 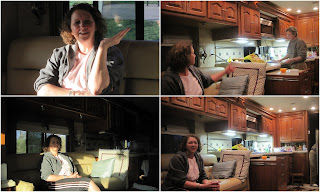 We talked here into staying for dinner and pretty soon it was time to say 'good night'.  She lives here in Fairborn and we're going to be keeping in touch I'm sure.


Talk about a fun day!  We started out meeting new friends Bob and Terry and ended up getting reacquainted with Diane whom we hadn't seen since 1986!