October seems to be a fun month in the RV world.  Folks are making plans or even already traveling south for the warmer weather.  I love this time of year.

We are also making plans for camping in Florida this winter, but I’ll save that for another time.  I was struck how fun it has been the last few weeks seeing RV friends.  First we had the pleasure of meeting up with Bruce and Gabe and we also got to spend some time with George and Marge.  Fun fun fun.  We talk about our times together and figure a way to meet up again in the future.

Our new RV memories happened this time with Gabe and Bruce.  We met them while on a Habitat for Humanity projects in Macon Georgia.  I believe we first met in November 2014.  It was so much fun with the group we had that we tried to repeat and all signed up for another gig in 2016.  Over the years we have kept in touch but never managed to hook up again until this recent visit.

They are living in Georgia but had lived on the Eastern shore and also spend time in Richmond raising their family.  We got together this time for a few minutes at First Landing State Park where they were staying and we also had them over to see our new digs.

They left and saw friends on the eastern shore but we found we still had one more chance to see them on their way back from the Eastern shore.  They were pulling their trailer so we found a convenient shopping center where they could park it for a couple of hours while we all went to lunch.

We arrived at the appointed location on time and they were locking things up.  I pulled up in the truck which were taking to lunch and Pam pulled up in the Honda, having spent the morning with Kelly working on a project.

So I drove up, left the truck running, locked over to see that Gabe and Bruce were finished up, got out of the truck when Pam drove up.  The truck was still running and she parked and locked the car (can you guess where this is heading ???) and then put her purse (with her truck FOB) in the truck, closed the door and locked the truck.

Then realized the truck locked.  With the engine running.  What?? No -- wait a minute, it never locks with the FOB in there.  Not possible.  Or is it??

With two FOBs in the truck apparently so!  😳  Now what?  Hmmm.  There must be a way out of this.  I noticed the keyless entry on the driver side of the truck and though, “I sure wish I had set that up.  It would come in handy at a time like this!!”

Nope.  Did I mention the truck was still running?  I had the thought that we could probably go to lunch and get back in an hour and it might be still running since it has a 35 gallon+ gas tank.  It was an option but not a good one.

I asked CarMax about our service warranty and if it covered towing and they put me in touch with the service people.  I went through my long sad story of locking my keys(FOB) in the truck and they said no problem, we can help.  After another 10 minutes or so I had the presence of mind to ask if this was free or was there a charge and how much?

The lady said I had $100 toward the cost of the service to unlock the truck and she did not know how much the vendor charged.  Hmmm -- that did not sound like a good option either and I knew we were covered with USAA.

I thanked the lady and said I had made a mistake and should have asked earlier but we had a free service with USAA and were going to call them.

I contacted USAA and it was all automated.  I never actually talked to a person, but I got a service call scheduled and verified our location on a map.  Then the wait began.

We decided even if we got the situation solved quickly, by now the lunch hour was in full swing and we didn’t want to hold up Bruce and Gabe from continuing on their trip.  There was a Subway in the shopping center and Bruce and I went over and brought back lunch.  They opened one of their slides on the travel trailer and a we sat down to eat our lunch there.

Not exactly what we had planned but it worked out great.  Before we knew it, a car pulled up and they ran  their tool down the window and unlocked the car in about 30 seconds.  That was a little scary to think all one needs is the tool to gain access to all our stuff.

We were elated to get it open, turn off the truck and that was that.  No charge and I realized I should have called USAA first.  From the time I hung up with the automated system to the folks arriving on the scene was 16 minutes.  Timely service indeed!

We were well satisfied.  I made a mental note to get the keyless entry set up (and did that two days later after going back to CarMax and have them extract the factory code from the vehicle).

We continued on with lunch and had another nice time with Bruce and Gabe.  And we added another episode to our RV memories!  And it wasn’t even our RV... 🙂

Thanks for joining us on the Roadrunner (less) Chronicles!

Where the First Thanksgiving Really Happened and Other Interesting Things

Coastal Virginia is a historic area and we took advantage of a beautiful day to visit the Berkeley Plantation. 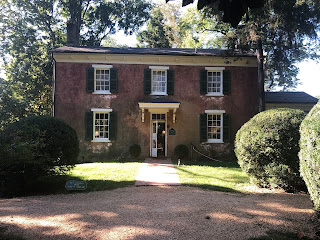 Williamsburg is about 45 minutes away and then the plantation is about 30 miles from there. 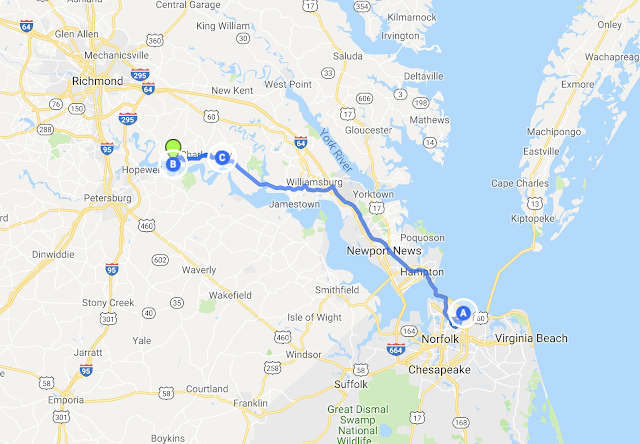 I said I hadn't heard that one and he said, "Oh yeah, it's well documented."  Over the years I learn that  Christopher Columbus didn't really discover America and now this.  Hmmm.  Pam and I hadn't had a day trip in a while, so we drove out to see what it was all about.

Perfect day for a drive!  The major highway road construction near Newport News/Yorktown/Jamestown/Williamsburg is now complete and it was a great drive.  Especially the stretch from Williamsburg to Berkeley Plantation.

We arrived right when they opened up at 9:30 and had 25 minutes to mull around and see some things on our own at one of the little museums.

We joined a tour of the property led by a well-informed docent who was dressed up for the part. 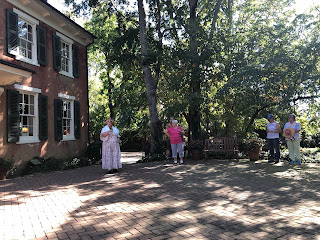 Early settlers from England arrived at what would become Berkeley Plantation and observed the first Thanksgiving in America on December 4, 1619.  This was 13 months before the celebration and feast at Plymouth Rock.
Here is how Wikipedia makes the distinction between the two.
Pilgrims and Puritans who emigrated from England in the 1620s and 1630s carried the tradition of Days of Fasting and Days of Thanksgiving with them to New England. The modern Thanksgiving holiday tradition is traced to a well-recorded 1619 event in Virginia and a sparsely documented 1621 celebration at Plymouth in present-day Massachusetts. The 1619 arrival of 38 English settlers at Berkeley Hundred in Charles City County, Virginia, concluded with a religious celebration as dictated by the group's charter from the London Company, which specifically required "that the day of our ships arrival at the place assigned ... in the land of Virginia shall be yearly and perpetually kept holy as a day of thanksgiving to Almighty God." The 1621 Plymouth feast and thanksgiving was prompted by a good harvest, which the Pilgrims celebrated with native Americans, who helped them pass the last winter by giving them food in the time of scarcity. 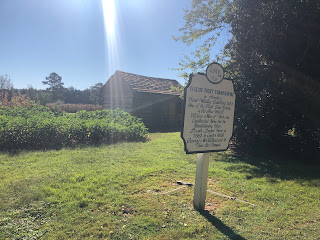 Other noteworthy facts associated with the Berkeley Plantation: 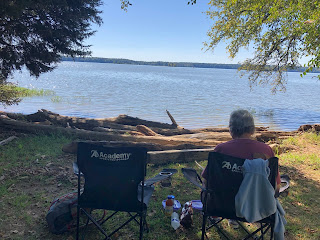 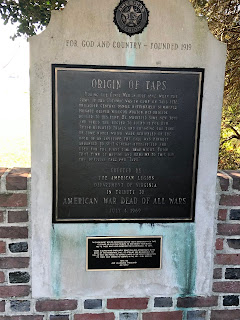 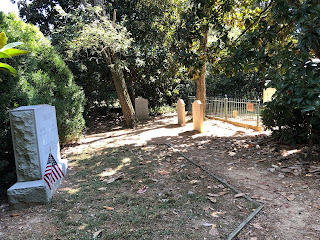 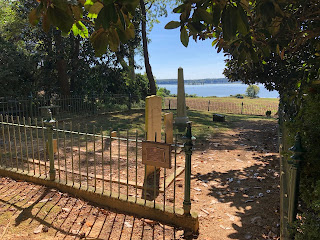 While there we wandered around the grounds and had a picnic lunch on the river.  As things would turn out, Jamestown was doing a test run of the ship “Godspeed” which added to the interesting things of the day. 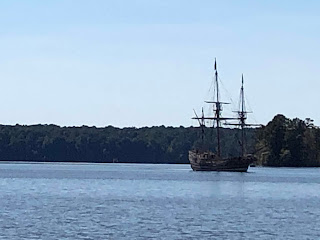 We thoroughly enjoyed our time at Berkeley Plantation and recommend it! 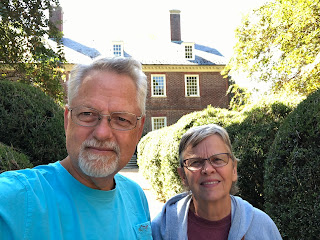 Thanks for joining us today!