Fort Worth was settled in 1849 and became the last stop on the famed 'Chisholm Trail' where thousands of cattle were moved north to cattle markets in Kansas. With the arrival of the railroad, Fort Worth was a major shipping center for livestock in the 1880's. Fort Worth continued to grow in the 1900's with the discovery of oil in East and West Texas and now is the fourth largest city in Texas.
We wanted to see some of the interesting spots and decided to go to the National Historic District Fort Worth Stockyards on Saturday and spent a couple of hours walking around. 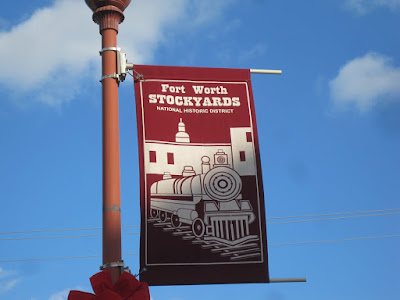 Fort Worth still maintains a western heritage and keeps it alive through a very strong educational and visitor center program. The cowpokes shown in the following pictures work for the city Visitor/Tourism Bureau. They were great and even stopped to talk and point their horse toward the camera for a better picture. 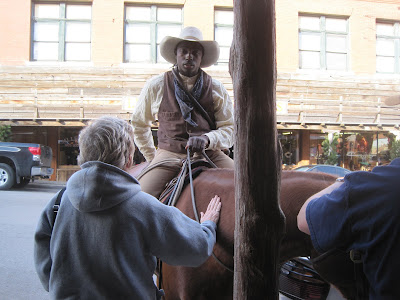 There are a lot of shops, hotels, eating establishments and historical points of curiosity at the Stockyards. We walked by the Texas Cowboy Hall of Fame and the Cowtown Coliseum which is near the Stockyards.
There were a lot of street vendors, entertainment and curiosities along the main street. I have never seen someone ride a Texas Longhorn! 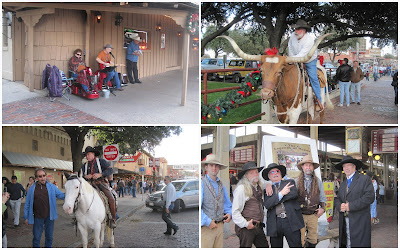 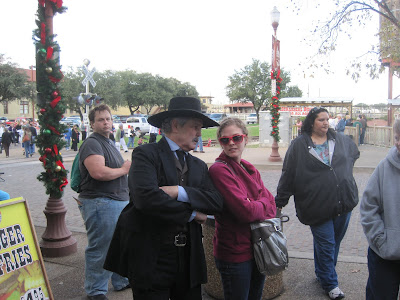 We stopped an talked with some posers. 'Phineas Navida' hammed it up a bit with Kelly and ended up wearing her sunglasses for a picture.

The corral was at one end of town with the Longhorns. Those cows are quite impressive beasts. Twice daily the cowboys round them up and run them down through town from the stockyards to the coliseum, so folks can get an inkling of what it might have been like back in the day. 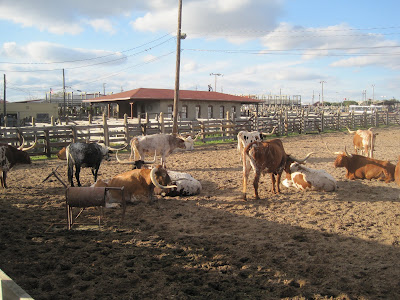 Did you know that there are seven types of Longhorns?

Kelly and I took turns seeing it we could stretch our reach to that of the Longhorns spread. 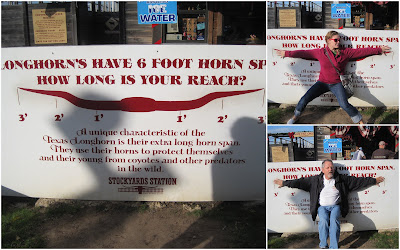 We had a good time and learned some things. I have been coming to Fort Worth for 30 years but have never been to 'Cowtown' and the Stockyards. It was a very interesting place. We have to go back and spend more time.

Hope you have a great week. We'll be leaving Benbrook Lake/Fort Worth and heading east for our appointment in Red Bay, AL.

Before I go, I want to thank you all for reading the blog --- appreciate it! We also love the comment, keep them coming! :)
Posted by Roadrunner Chronicles at 6:23 AM