NOMADs with a French connection

We had a very interesting day. We started off with our team meeting and devotions, then spent all day at the Ward house working on various areas.

I took on replacing a broken window. I had to knock out the remains of the old one and clean out the small pieces that were glued to the frame. When I attempted to put the new one in it was 1/4 inch to big on the top and side. 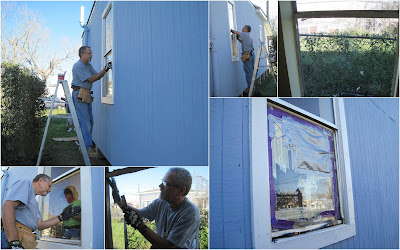 The collage had the pictures a little out of sequence, but the glass got re-cut and I was able to finish it up in the afternoon. 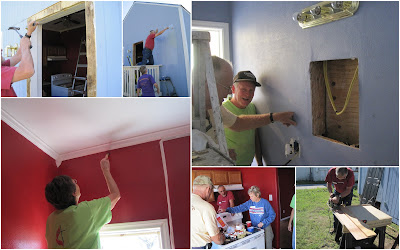 Joe was replacing the back door most of the day and helped Bette finish painting a window we took out yesterday. Harry and Dan were rewiring the bathroom for a new fan/light/heater combination. Nancy was finishing the trim detail in the kitchen and dining rooms. Pam spent most of the day caulking the laundry room and around doors.

Each day we take two breaks, one in the morning, one in the afternoon. It is a good way to get to know each other and tell stories. 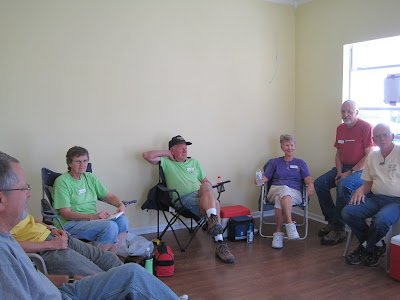 After work we picked up a few things at Walmart and were delighted that Aline and Emmanuel could join us for dinner. 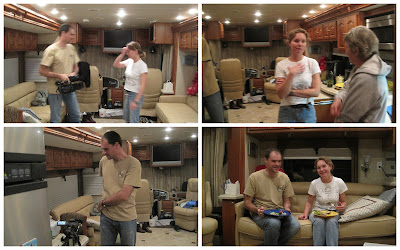 They are a couple from France who are spending a few months in the U.S. filming a documentary on the subject of volunteerism. They contacted NOMADS and came to our project to do some filming. We had a great time hearing their story. In France, volunteering is not part of the culture. Aline and Emmanuel hope to go back and show the French how American volunteer in many different settings. 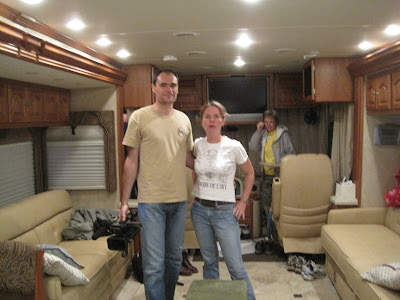 Some video work was done in San Francisco which is posted online at Bread and Roses. They did the video which you can view. They are a fascinating couple and we will have more to say about them and their project.

That is about it but before we sign off, I want to thank some more people for following us on our blog! It means a lot to us that you would take the time to check in and sign up to 'Follow' us.