We were glad to have a day off so we could run some errands and see some of Galveston. First though, we had to say goodbye to NOMADS: Ron and Emily Blevins. They have been here for two weeks and they were heading on to Houston before returning to their home in Wyoming.
Pam was cleaning up the grill and some other things and decided to check the water level in the coach batteries. We have a Pro Fill system that is very handy. A tubing system fits over the battery caps and another tube with a pump bulb is attached to them. One end goes into the bottle of distilled water and a few pumps later the batteries are topped off. 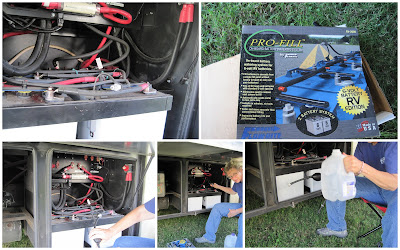 It is a good idea of keep them full and extend their life and capacity.
Next, Emmanuel wanted some video footage of our coach for his documentary. I was glad to oblige and show him around the outside of the Roadrunner. I gave some basic information on the storage, plumbing, electrical and generator systems on the coach. 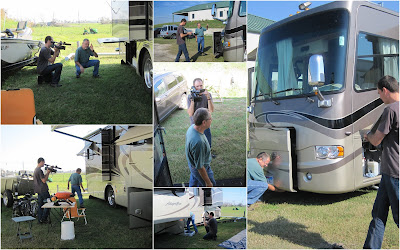 By that time is was about 11:00 or so and it was time to say good bye to Aline and Emmanuel. They have been with the team for a week and we will miss them. They are going to visit Big Bend National Park and get some more data and content for their documentary on Volunteerism in America. 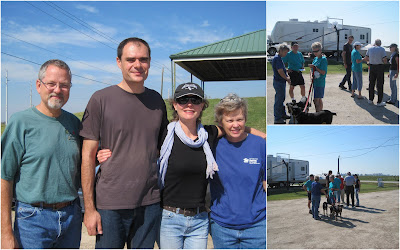 They are a very interesting and friendly couple from Champeix, France. We all enjoyed them tremendously and were sad to see them go. We all had our pictures taken with them. As we had done with the Blevins earlier, we gathered in a circle and Marley led us in prayer for their safe travels and God's blessings.

Pam and I grabbed the camera and drove around the island. It has been fantastic weather the last week and the havoc rendered on the island during Hurricane Ike sometimes just fits into the scenery.
However, there is still alot of evidence of the destruction. Near our location along 8 Mile Road, there are whole neighborhoods that were wiped out. 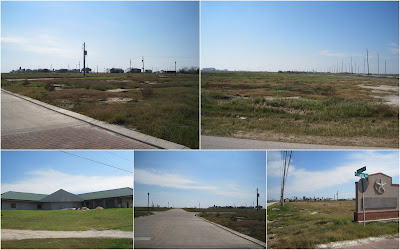 Down along the seashore, large equipment continues to move boulders into places to create more breakers. 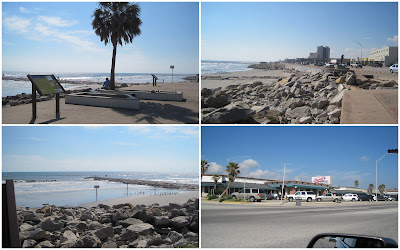 I took a picture of Guidos which is a local resturant where my brother Brad worked during his college days in the mid 1970's. It has changed a lot since then.

We also visited the Strand and Historic District in downtown Galveston. Beautiful buildings from the mid 1800s and early 1900s are being restored into a very trendy downtown shopping/cafe/restuarant/office area.

The old Cotton Exchange was built during the height of the industry. Cotton cotinues to be shipped out of Galveston Harbor. 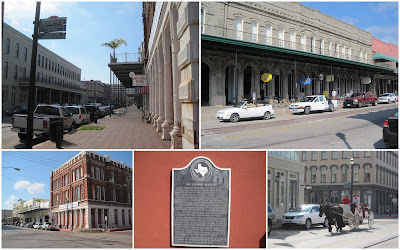 We did some more sightseeing before we headed back to the Roadrunner. 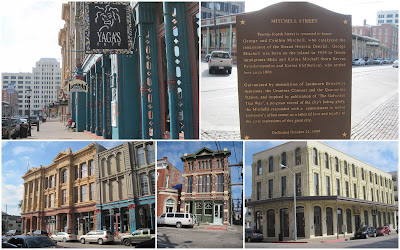 Along the way we stopped at Walmart, McCoys (building supply store), Home Depot and Kroger's grocery store. We bought a pound of shrimp and cooked them for dinner. It was a nice change and something we don't do very often.
There was not much good TV on although I did find an HBO boxing match from last year and watched Oscar de la Hoya get totally pounded by Manny Pacquiao. By then it was late and time for bed.
I never get tired of saying thank you to those of you that take the time to view the blog. I am grateful you do that and want to specifically thank:
Mike Mills, Reid, Lynn, HK, Rita Patterson,
HK, Joe & Sherri, Charles Henry (Roz), Julie Lindeman,
owrudoin, Ross & Pam Dumfree
We are over the half way mark on our goal of getting 100 daily 'Followers'. As you know, many of us who blog also Follow others. If you get a chance, check theirs out too.
Thanks for checking in on another post of the Roadrunner Chronicals!
Posted by Roadrunner Chronicles at 7:26 AM