There may be some 'bluegrass' - as in country and western music going on in Boise, but I wouldn't know about that.

Unless you are a college football fan, you might not know about the Boise State University Football Stadium.  It is the first in the country to have blue 'astro turf' for their football field.  We spent a few days in Boise last week and it was something that was on our list to see. 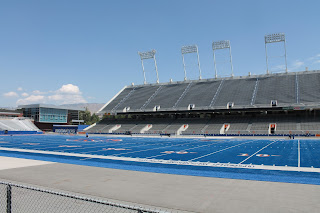 Boise State University is home of the nation's first "Blue Turf".  I don't remember when I actually first watched a game, but it is really different.  Almost 'hard on your eyes' because is different than what you expect.

We found the stadium and went to the Bookstore to ask about tours or access to the stadium. 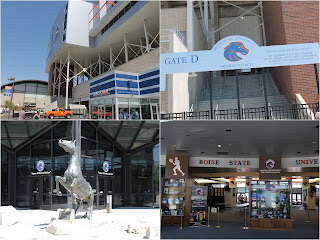 Sure enough, over past Gate D, by the Bronco Statue, we could go into and through the Boise State Athletic the Hall of Fame Museum and out to the stadium to see the field.

Unique? Strange? Weird? Different?  Yes - and more of a curiosity than anything I guess. 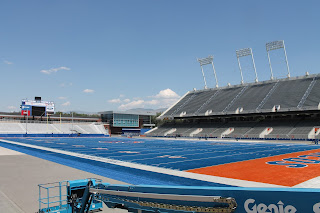 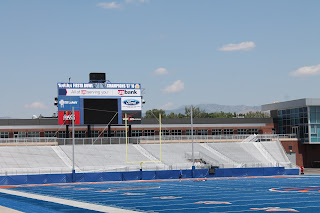 Not sure exactly what it is but it's a novelty for sure.  And a good marketing tool for the University.  Everyone wants to be different and it is definitely that.

The first Blue Turf was installed in 1986.  They are now of the fourth edition.  One thing it has done for the University is given the Broncos a recognizable name.  And it helps to have a pretty good football team over the years. 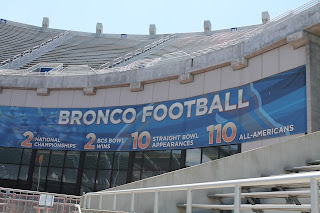 They won the Tostitos Fiesta Bowl Championships in both 2007 and 2010.

On the field was a lonely kicker who was practicing.  From where we were it looked like all of them were going through the uprights. 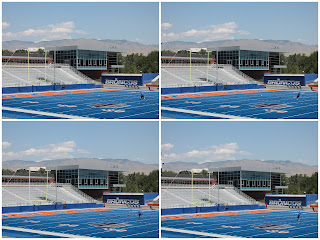 See if you can follow the tiny ball in my sequence photos?

We didn't stay long, but it was one of the more interesting sights we'd seen in a while.  But I'm a fan of real green grass for football games.  How about you?

Thanks for joining us today on the Roadrunner Chronicles! Until next time...


Posted by Roadrunner Chronicles at 9:36 AM