The Presidio Trail in Tucson

We didn't do a whole lot yesterday. We went to the gym and worked out, then came back to the Roadrunner and had lunch. Then I ran some errands. I picked up a couple of inner tubes for my bike and some swim googles in case I get motivated and want to swim laps at the base indoor pool.
On Monday (President's Day) we checked out the Presidio Trail. It is a historical walking tour of downtown Tucson. The only other tour of that kind was one we did in Santa Fe a few years ago. This one was entirely self-guided and took a couple of hours to walk. 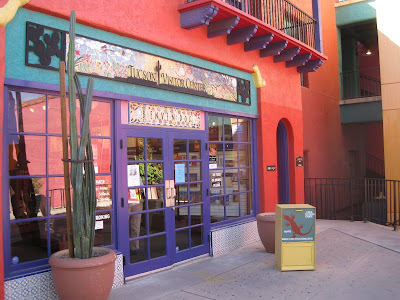 We stopped at the Visitor's Center and picked up a map.
The tour goes along a blue (turquoise) line on the street. 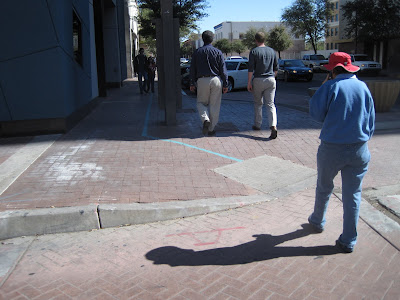 Our first spot was the Garces Footbridge which goes over Broadway. It commemorates Father Francisco Garces who was a Franciscan priest. 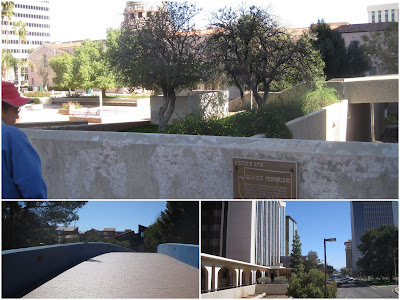 He joined up with Lt Col Hugo O'Conor in 1775 to found the presidio.
We went by the Pima County Courthouse that was built in 1929. 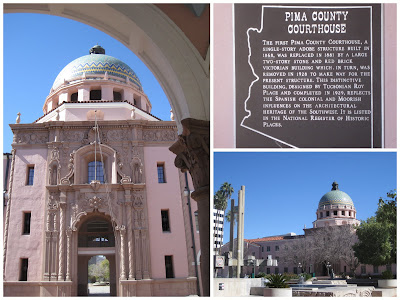 It was built on the Presidio site and an actual piece of the original wall can be viewed in the Assessor's Office on the south side.
Next, we saw the Telles Block (which is now the Old Town Artisans area). It is a series of attached Sonoran row houses with a patio courtyard. 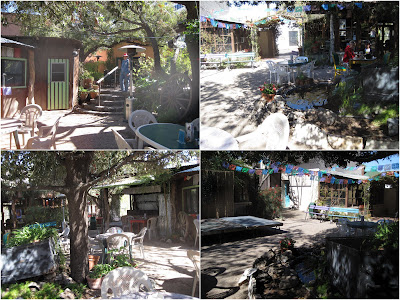 These old style adobe building now are home to 11 artisan shops and a restaurant.
The heart of the walk is the old Presidio San Agustin de Tucson. It is open from Wed to Sun so we looked in from the front gate. 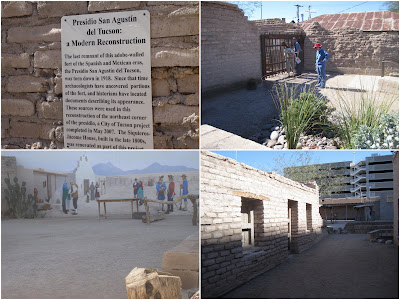 This was one of the first European structures in Tucson. The fort was at the northwestern corner of the Spanish frontier in Arizona. The adobe walls were 10 feet high and a couple of feet wide.
The railroad came through Tucson in 1880 which increased access to Tucson with the rest of the country back east. 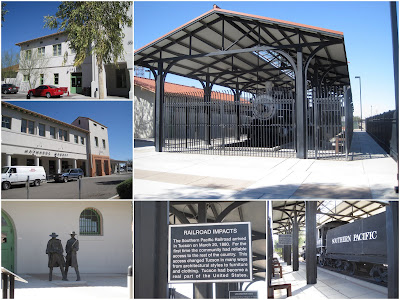 Wyatt Earp and "Doc" Holiday caught up with Frank Stillwell in a gunfight in 1882 near the old depot.
Across the street is the Congress Hotel which was built 1919. 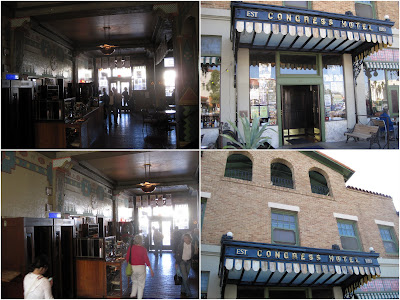 It became famous in 1934 when members of the notorious John Dillinger's gang were holed up there.
The trail took us in front of Teatro Carmen which was a theater which opened in 1915 and was devoted to works in Spanish. 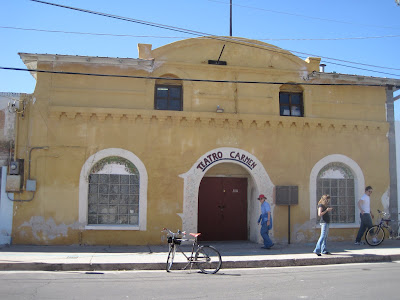 It also held other events including boxing, movies and was at one time an Elks Lodge.
La Pilita is a small museum dedicated to preserving the history of the nearby Barrio Viejo. 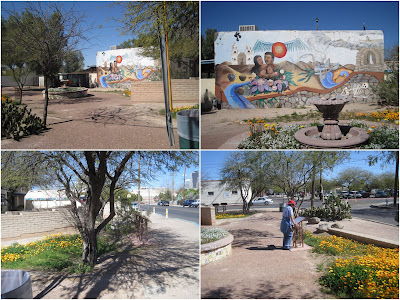 It has a small gift shop and a garden that was in full bloom.
The last place we walked by was the Sosa-Carillo Fremont house. The oldest part of the structure was built in the 1850's. 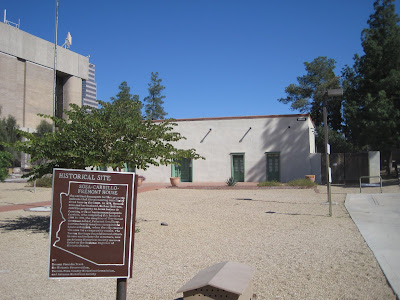 It was once owned by the Sosa-Carillo families before it became a part time residence of the territorial governor, John C. Fremont in 1878.
There was more to do and see along the trail, but we saw enough for the day and enjoyed the two hour walk. We packed a lunch and made some memories as we wandered through out the historical areas of Tucson.
That was the highlight of the day for us. Thanks for joining us on the tour and checking in with the Roadrunner Chronicles. It is always good to hear from our readers -- thanks for leaving comments and signing up to Follow.
Hope your week is going well.
Posted by Roadrunner Chronicles at 8:44 AM