It has been a strange season of weather for most of the country.  Here in Tucson, it has been mostly nice and sometimes rainy.
A couple of days ago, we rode our bikes around the base which we should be doing more often. 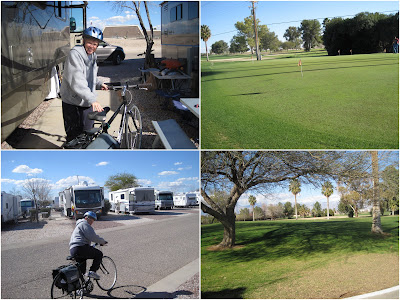 Pam left for the gym and a workout while I rode my bike over to the golf course to practice.  I took some wedges and my putter and spent a couple of hours doing that.
We need to get our medical insurance straightened out and are changing from TRICARE Prime medical coverage to TRICARE Standard.  With TRICARE Prime, we are tied to our doctors at Bethesda, MD and Fort Meyers, VA.  We complicated things by changing our residence to South Dakota once we started full-timing and do not know when we will be back in that area of the country or in Virginia.
We are outside of the TRICARE North region and it will be easier to see doctors throughout the country with TRICARE Standard.  It will not matter what TRICARE region we are in, we just need to find a doctor that takes TRICARE insurance in the area where we need it.  And there are plenty of doctors and specialists all over the country that take TRICARE insurance.
We went over to the Davis-Monthan AFB TRICARE Office where we got some information and help from Holly. 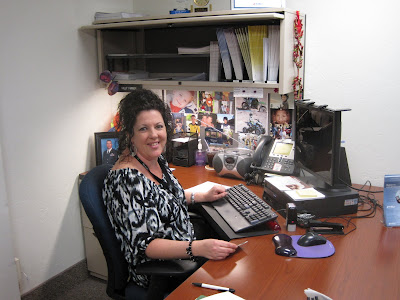 We got the correct forms, filled them out and faxed them into TRICARE so we can begin under the TRICARE Standard policies.
Next, we went over to the Post Office, mailed some packages and made a quick stop at WalMart. 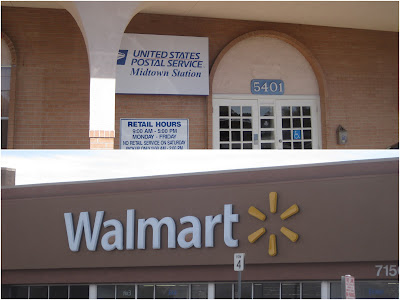 We signed up for golf on Wednesday with a group from the FAMCAMP.  Our RV group has a block of standing tee times.  Our tee time was 10:12.  There were three groups ready to play.  More golfers probably would have showed up but a 60% chance of rain was forecasted.
But we have rain gear and it looked pretty good when we teed off.  We played with Ernie who is from Washington state.  He commented on how many people from Washington he has met in the RV campground. 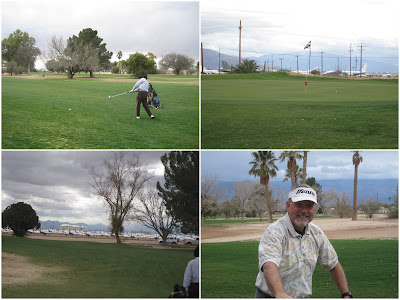 We had a good time on the front nine.  We even played well.  I had two birdies and a 38. 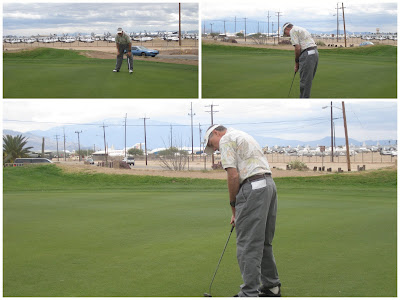 Pam had a steady 45 and was hitting the ball long and straight off the tee.
Things started out a little differently on the back nine.  We had a couple of tough holes, then the clouds really moved in.  It started to rain a little which was OK 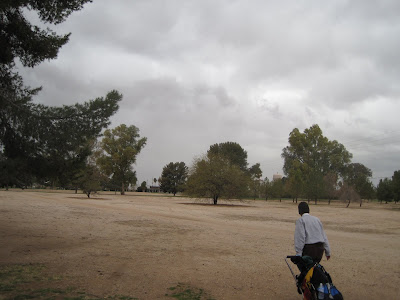 but when the thunder started, we decided to pack it in.
A few minutes after we started toward the clubhouse, the base public address system stated lightning was spotted within 5 miles of the base and everyone should seek shelter.  We picked up our pace and made it to the clubhouse before the heavy rain started.  The pro gave us a rain check for 9 holes so we will be out soon no doubt.
It rained pretty hard for a couple of hours and I did some online work.  Late in the afternoon we followed up on my camera which I left at Best Buy to get cleaned.  They called and said they could not send it back, so they would just give me another one.  Sounds good to me! 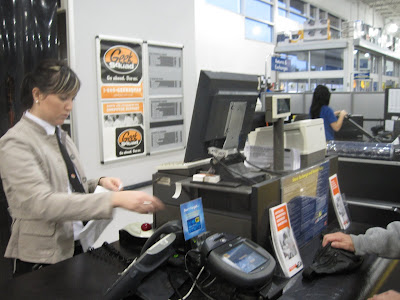 We took it in and got the paperwork done and now I have a new camera, just like my old one, only better.
After that, we went over to the mall and picked up a gift and returned home (back to the Roadrunner).
Later, the sun came through and bounced off the clouds in the other end of the sky to produce one of the most vivid rainbows.  I have ever seen. 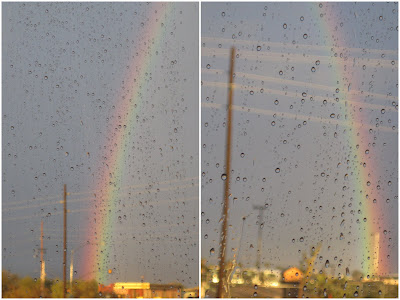 I continued with work and Pam fixed another great dinner of chicken, mashed potatoes and cabbage.  It was great!
Yesterday Meghan continued with radiation and also got her test results back.  The cancer has spread and she will also be starting another round of chemo.  She posted an update on her blog.  This is not good news and we feel for her, her family and Adam.  This is harder than I can adequately describe.  We will keep praying hoping and letting them know how much we love and support them.  These are difficult times.  Thanks again for your prayers and support.
And thank you for joining us on the Roadrunner Chronicles!  Hope you are having a good week.
Posted by Roadrunner Chronicles at 8:27 AM