We made our way back across the country (west to east), completing the last leg of our first coast to coast trek in the Roadrunner.  We left Virginia in June 2009 (from Fairfax, VA and went to California with a lot of stops along the way.)

In October, we spent the first half of the month in Maynardville, TN staying at Joan and Mike's place.  Mike cleared out an area on his lot where we could park the RV.
Then we moved on to Dam Neck Annex, part of Oceana Naval Air Station.  The campground in Dam Neck was one of our favorites. 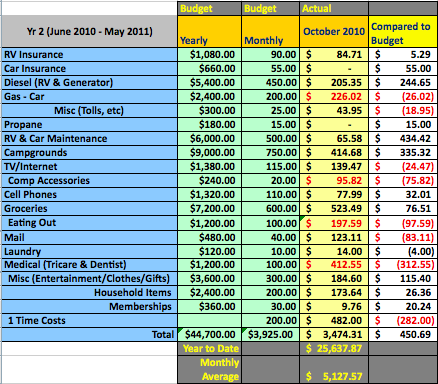 Biggest Expenses
Our biggest expenses were our Wii controller, eating out and medical.  We spent some emergency room and hospital dollars when Pam had a 4-day stay in Knoxville to take care of an allergic reaction to sulfa drugs for an UTI.  She developed Stevens-Johnson Syndrome with hives and fatigue and some scary stuff.  But she recovered with the right antibiotics after about 10 days.

Large One-Time Cost Items
Our biggest expense for the month was $482 to re-register the Tiffin Motorhome (The Roadrunner) and the Honda CRV.
Another expense we were glad to do but hadn't planned on was $91+ for paint and materials to fix up Kelly's front porch.