Sometimes I ponder the different aspects of the RV lifestyle.  We have been on the road now for about 18 months.  During that time we have met a lot of wonderful people, seen and done a lot of fun things.  We have also had the satisfaction of being involved in our 'calling'.

'Calling' is an interesting word that in our case it refers to one of our central themes in this lifestyle.  During our two years of preparation and planning, we tried to consider as many aspects of full-timing as we could think of and we tried to anticipate situations and how we would handle them.  Among them was trying to determine an overall guiding thought of 'why we are doing this'.  A similar question we grappled with was, 'what is our purpose in doing this RV thing'.

An idea we settled on was helping other people by volunteering.  But volunteering takes many forms, most of which does not really 'fit' us.  Some folks volunteer with Little League or in their kids' classroom.  Some serve food at homeless shelters or spend time at a park or hospital as volunteers.

An idea we kind of liked was helping with Habitat with Humanity.  We had never done anything with them until we decided to 'do a low cost probe' ~ that is, we found one close to where we lived and volunteered a few weekends to check it out.  It was an easy way to see if we liked it and could see ourselves volunteering with Habitat.

That was about three years ago with the Prince William County Habitat group.  I looked at other possibilities (Howard Payne of RV-Dreams.com has a great section on his web site on volunteering) including NOMADS.  NOMADS looked like it could be similar to Habitat in the work they do:  fixing up houses.

After volunteering with Habitat, we had a few conversations on our back porch while we were preparing to full-time.  Without really thinking about it, we began to include 'calling' and 'we feel called' to our conversation.  By that we meant, 'we can see ourselves doing Habitat and NOMADS type of work' when we full-time.

Now, three years later and 18 months into this lifestyle, we are able to still say we are thoroughly enjoying this.  Habitat for Humanity and NOMADS work has given us purpose and a whole lot more in retirement.

It is a wonderful thing to find your 'niche'.  I realize it is not for everyone ~ and it shouldn't be.  The RV lifestyle isn't for everyone.  But it fits us.  And we enjoy it.

And sometimes during the course of different projects and places, there are little things that motivate and encourage us.  And here in Virginia Beach (the South Hampton Roads Habitat for Humanity Chapter) a unique thing is the notion of the Red Hats.  We noticed a few folks wearing red hats the first time we showed up at the job site.

The Red Hats are the regular volunteers that help the Construction Manager and Volunteer Coordinator get the work done.  We saw a similar thing with a regular core of volunteers in Santa Fe when we spent three weeks with the Habitat Care-A-Vanners.  That group of volunteers become more and more experienced and often bring a level of expertise to the job site that doesn't often happen with the weekend volunteers.  But in Santa Fe, you just kind of figured out who the informal leaders were and who you could ask for some guidance.

So we have been among the Red Hats.  It is a nice group of people from a lot of different backgrounds.  And they show up and assist the construction manager by taking a team of 4-5 volunteers and weaving them into the work flow each day.  One construction manager can't do it all.  The Red Hats are his 'go-to guys (and two gals)'.

In our case, at the Red Mill construction site Joe the construction manager, has about 4 or 5 work projects going each day.  And he is able to turn to the Red Hats, and one of them will get the guidance needed, and take a group of volunteers and go put up a fence.  Or hang sheet rock or paint walls, or whatever.

The Red Hats become one after they demonstrate a level of commitment and ability.  There is no set time or qualifications to become a Red Hat at the moment.  It just happens.  In the few weeks we have been here, I thought it would be nice to become a Red Hat ~ just to be known as one of the 'dependable ones'.  Funny how a red hat becomes a motivating item. 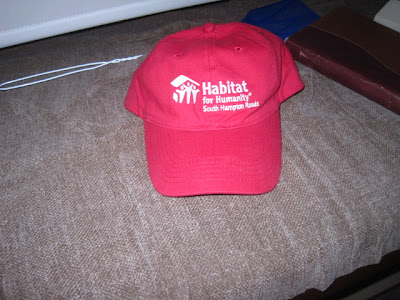 Or sometimes all of the above.

On a different note, we had a long an wonderful conversation with Adam from India yesterday.  He seems to be doing well and finishing up his last few weeks in India.  We let him know that Carolyn Jarvis from GlobalTV (16:9) in Vancouver called and let us know her 20 minute documentary on Meghan will air this Sunday, November 14 at 6:30.  I am not sure if it be available on the internet at that time (streaming) but she indicated they would be posting it the next day at this: link  Be sure to watch!