Please join me in welcoming the newest follower to the Roadrunner Chronicles:


Networking comes in many forms:

In fact, learning how to meet new people is absolutely one of the most important and life changing things I learned at college.  Every Friday night I went to "College Life" which was a weekly meeting on campus to meet people, hear a short talk on some aspect of Christianity (I was a new Christian at the time), and to usually hear some good music.

The most terrifying part of every week were the moments right after the meeting started where the MC would say:
"Please stand up (there were about 200 at each meeting all sitting on the floor of the large room) for the next three minutes and meeting three new people in the next three minutes".
For the first couple of seconds I was horrified by the thought of walking up to someone cold turkey and meeting them.  Yikes! What do you say to complete strangers?

Then I found those magic words:  "Hi, my name is Randy, what is your name?"

Not exactly complicated or catchey--but it was hard to do at first.  I tell you once I got over that hurdle, it was easy.  That lesson has served me well to this day.  I use it every day.  One of the best lessons I ever learned.

Last week I had a very interesting experience at a United States Naval Academy (USNA) Alumni networking breakfast meeting.  One of our new friends at the Habitat for Humanity construction site, Dennis (in the yellow shirt) 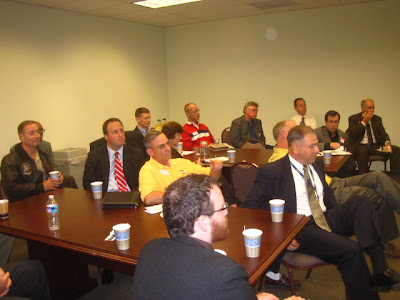 invited me to join him at his local United State Naval Academy chapter meetings.  The purpose of the event is to help people find jobs.  Some go there looking to hire people, some go there looking for a job. Others go because they are invited (like me) and are curious.   Each week they have a short presentation.

I didn't know how long it would take me to get across town and I didn't want to be late.  As it turned out, I was a little bit early but it was no problem.   I easily found where the meeting was held and went in. 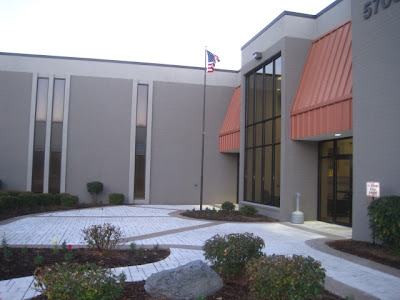 Bob started this event in 1993 and it has been going ever since.   The meeting is held in the conference room of this building.

Everyone milled around for a few minutes before the meeting.  I got some coffee and began introducing myself and asking what they did for a living.  Most people are glad to tell you about themselves. 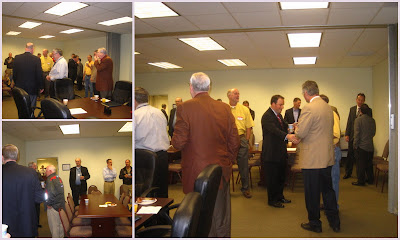 One of the more interesting people who spoke up was Bill.  He is a USNA graduate and one who is about to launch a venture in Warsaw, Poland.  His business is a "Bed, Bath and Beyond"- type of business.  His website is:  http://www.decorador.pl/catalog/index.php 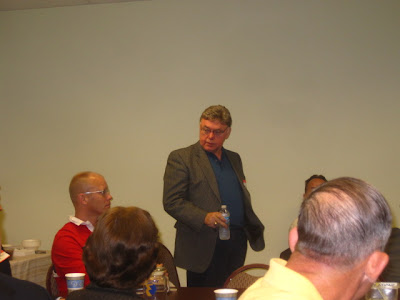 There was a wide range of interest and job possibilities at the breakfast meeting.  Some are entrepreneurs, some are folks who work for the military or government.  Others work in the commercial or retail arena.  I met Mike who works at a vegan bakery.  Another, Guy, has a business selling hoses.  Quite a mix of interesting people.  And the common denominator is the fact that the great majority of the folks are USNA graduates.

Later, a brief presentation was made on Reverse Mortgages.  Bob introduced the speaker who kept it short and offered some interesting points on the subject. 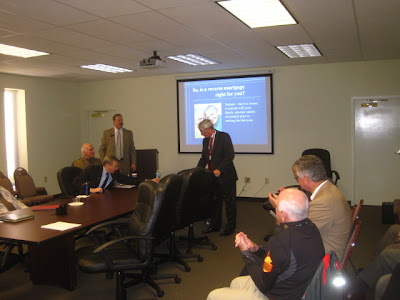 It didn't have a lot to do with with jobs, but since many there were in their 50's and are retirees, the subject was relevant to many attendees. 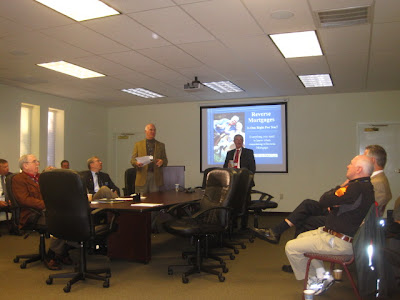 It was a fun morning of networking and seeing the results of Bill's idea to help others via the breakfast.  The meeting was very very well run and it was interesting.  It was good of Dennis to invite me and I appreciated the chance to meet a lot of USNA graduates and their class mates.