We spent July with Adam in Michigan and Pam flew down to Texas to help Kelly drive her car to be with us for a few months.  She was grieving like all of us over the loss of Meghan except she was all alone in Texas.  She had gotten laid off earlier in the year and was still looking for a job.  Instead of her toughing it out alone in Texas she decided she could look for a job just as easily online and be with us.

So she and Ed and Pam arrived back at Haas Lake and then we headed to Tobermory Canada, Parry Sound Canada and we finished up the month in Lake Talon, not far from North Bay Canada.  We spent time with Bill and Marg in Tobermory at their cottage (while we stayed at Tobermory Village Campground), then moved on to the KOA at Parry Sound before going to Talon Lake to see Jeff and Tiffany and their family. 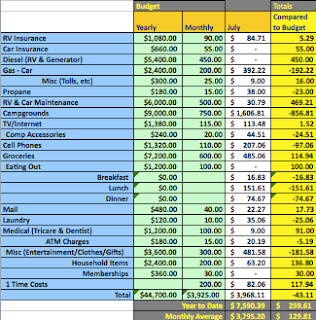 Biggest Expenses
During the month we put plenty of miles on the car and were $192 over budget.  Almost double of our budget.  Our biggest expense by far was for campgrounds.  We blew our $25/night campground budgeted rate by double!  We were way over - like $856 over budget for the month.

Large One Time Cost Items
We took a fabulous glass bottom boat tour our of Tobermory Little Harbor and then another boat tour through the islands of Parry Sound.  They were both wonderful.  Our splurging cost us $307.

Monthly Average
Even though it seemed as if we put on a lot of miles during the month in Canada, we were only $43 over budget.  At $3,968.11 I thought that was pretty good.

On the other hand, our nightly average campground cost was $51.83.

On average, for the first two months of year number 2 on the road, we are $129 over budget.

There's another look at our financials for July.  Thanks for joining us on the Roadrunner Chronicles.  Until next time...

Posted by Roadrunner Chronicles at 8:21 AM