Fun on the Lake

I want to welcome our new Followers:

Bill and Nancy
Thanks for joining!
And that brings us to the next question...Whom will be next ?  We are inching our way toward 150...
_______________
We got a late start over to the Royce's cabins.  I went for a long run and the we all had showers so it was after noon before we left.  Tiffany had to get a boat license and we met over at that dock.  While there we ran into a family of six who were making their up Talon Lake on a  canoe trip.

The Meyers have been doing this for the last 7 years when they decided to follow the 'Voyagers' trail.  It seems like a neat thing to do for the hardy at heart.  And I imagine you have to be in pretty good shape.  They carried all their backpacking and tent supplies in their canoes.  We didn't talk long so I didn't get all the details. 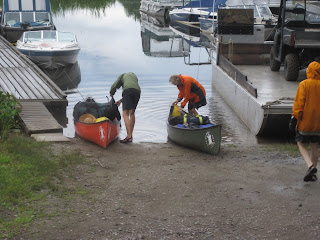 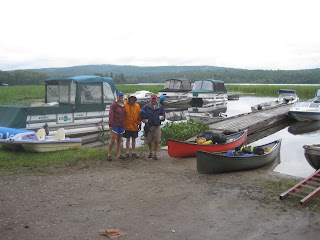 Over at the cabin it was raining on and off most of the afternoon.  In between the showers, Emily and Lauren took turns diving off the dock.

Lauren demonstrated one of my favorites:  The Penguin dive!  I'd give her a 10! on that one...
A highlight of the afternoon was watching Jeff take the kids out on the jet ski so they could do some knee boarding.  Caleb had no trouble.  He looks like he has done this hundreds of times. 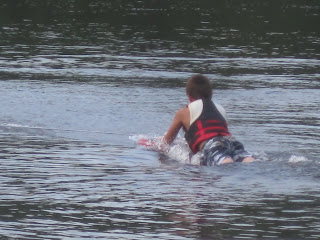 Kelly gave it a try and got up on her first attempt.  Pretty impressive. 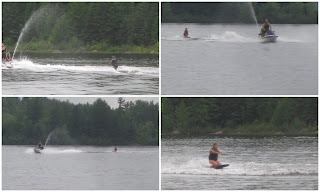 It seems as if it is easier for the little ones to do it.  The older ones struggle a little more...
After that we decided to squeeze in an 'Appetizer Cruise' before dinner.  Pam and Tiffany and Kelly fixed some munchies (mainly cheese and crackers) and we went for a nice ride on the pontoon boat to the other end of the lake.
Jeff made sure we had an extra can of gas on board and way we went.
It was cloudy but still a nice ride.  There are a number of cabins along the lake, but it doesn't seem too crowded.  A few spots have a small beach. 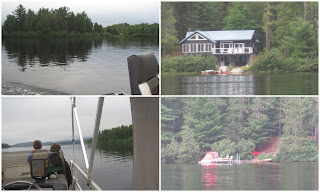 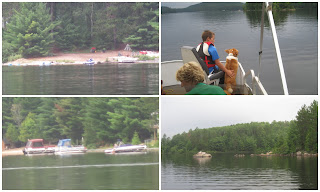 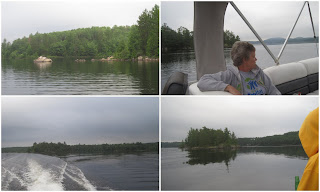 On our way back the boat sputtered and came to a stop in the middle of the lake....Jeff's prior planning worked out well. 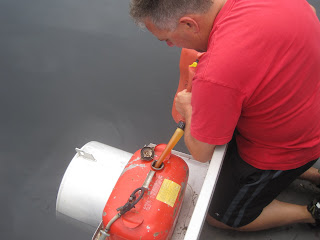