Jeff and Caleb were at the Roadrunner at 8:00 AM.  We drove into Mattawa to play golf and tee off a little before 9:30.  It was a nice 9 hole course that was not too busy and perfect for our day.  Caleb is 10 and just starting to play.  He has a great swing and lots of ability but doesn't play much.  He is more into baseball and made the all-star team earlier in the summer. 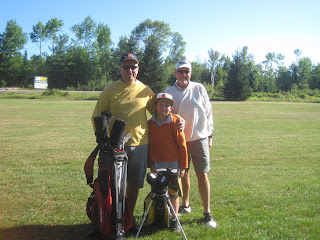 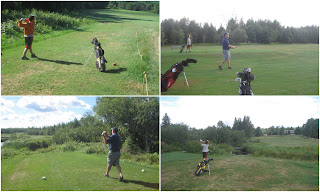 We all hit some nice shots.  Jeff sank a 6 and an 10 footer which were the longest putts of the day.  I had a better than average day bogeying only one hole on the par 37 layout.
After that we went to a chip stand in Mattawa for lunch and met some nice RVers.  Jeff and Tiffany went to Miami University of Ohio so when he saw Brittany (I hope I got that right) with that on her T-Shirt, he talked with her mom and grandmother Ann.  Ann and her husband had the large Pace Arrow in the parking lot and we struck up a nice conversation. 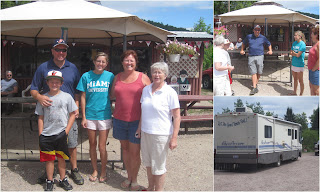 They were happy to take a picture and I told them it would be on today's blog.  That's 3 generations of girls there.
In Mattawa, Jeff looked for a faucet, some spaghetti sauce and chocolate chips.  While he was doing that I took a few pictures of the 'Statues of Mattawa'.  These are some carvings of people with historical significance in the early growth and development of Mattawa. 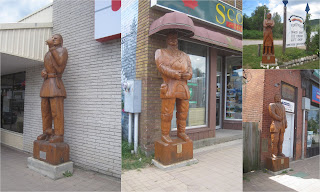 The town sits where the Mattawa and Ottawa rivers meet and it was an important stop for trappers on the Voyagers Canoe route  from the Great Lakes to Montreal back in the 1700's and early 1800's.

We got back to the cabin about 3:00 and it started raining pretty hard.  We all went off to our various spaces and some talked, did some work online and/or played cards.  We had a lot of hands of solitaire, 31 and hearts during the afternoon.

Tiffany made some chocolate chip scones that didn't last long! 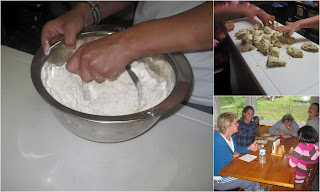 Aaron is a Boy Scout and has about 7 or 8 merit badges.  He is working on the Cooking Merit Badge and prepared a feast for us.  We had spaghetti and meatballs that was perfect! 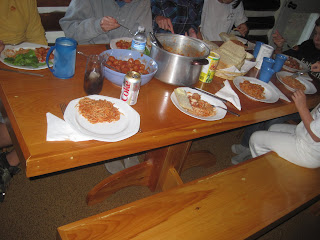 After dinner we all piled into the pontoon boat and went over to the campground for ice cream.  After that we had a tour of the Roadrunner and a group shot of the Trasks and Royces.  It was our last day here so it was nice to get a photo. 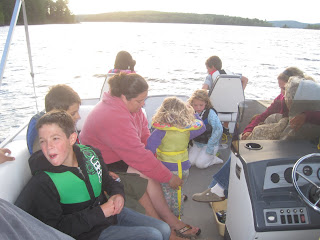 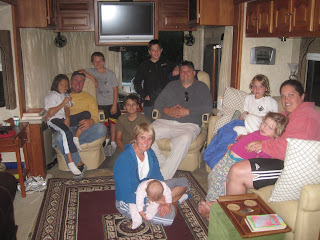 A little before dark, we said our goodbyes and I packed up the Roadrunner for travel.  The only thing left is to retrack the power cord and hose, and to hitch up the car.  Toronto is next on the itinerary!
Thanks for viewing and signing up to Follow.  Only a few more Followers to go before we hit the 150 mark...
That's all for the edition of the Roadrunner Chronicles!  Have a great weekend!!
Posted by Roadrunner Chronicles at 7:10 AM