We flew to Sioux Falls South Dakota to become state residents. Some of the reasons we chose South Dakota:

Sunday we flew out of Dulles and had a layover in Minneapolis Minnesota. Nice airport to hang out for a while. Then to our surprise we were invited to upgrade to first class on the leg to Omaha. Nice! 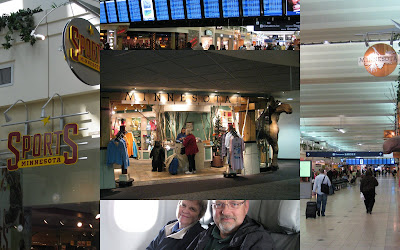 We got a rental car and drove from Omaha NE to Sioux Falls SD. Our first appointment on Monday AM was Alternative Resources where we established an address with a PMB (Personal Mailbox).

We signed up with mail forwarding with Paul and then met Jessica who handles Vehicle Registration.
Paul also gave us a tour of the operation around his office and we met more folks in the mailroom. He showed us PMB #3196 which is our new address. 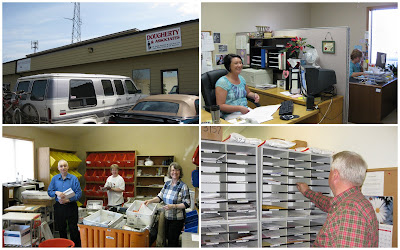 Then we went next door to John Dougherty & Associates to get RV insurance quotes.
The Department of Motor Vehicle Office branch across the street is closed on Monday, so we went downtown to the Minnehaha County Administration office.
We filled out the application, took the eye test, got our picuture taken and handed over our Virginia Drivers licenses.
We returned to Alternative Resources where Robin helped us fill out the Voter Registration form. We spent the night at the Fairfield Inn which is listed on the voter registration form.
We also decided to open a bank account at Wells Fargo Bank (not pictured). It is now joined with Wachovia and will give us coast to coast coverage. 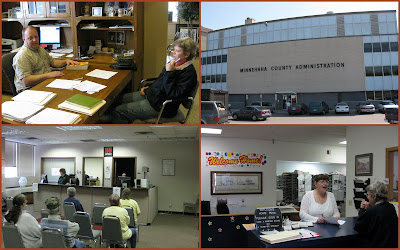 When Pam was in the Air Force, she went to Technical School training in Biloxi MS where she first met Steve and Therressa. Little did we know we would be come residents of the South Dakota 30 years later and spend time in there hometown.
They are perfect hosts and generous people. Before we got to town, they called and we met them at their beautiful home. From there we went over to the famous Sious Falls Park. What a neat place. We had a nice Mexican dinner Sunday evening and last night had hamburgers at their place. What a treat! 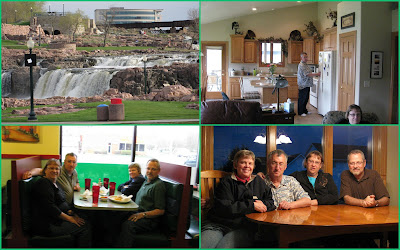 After dinner we took a windshield tour of the city and saw where they grew up and found out more about the city than we could even read on our own. It is a very impressive town that we will be proud to call home.
Before our evening was over we got to go out the the airport and Air National Guard area where Steve works. It was a wonderful day and a great way to end the evening.
Posted by Roadrunner Chronicles at 10:57 PM