We went for an evening walk a couple of days after we got here to Agave Gulch - the Davis-Monthan AFB FamCamp.  It is a nice time of the day and we caught the sunset.  There is something amazing about these Arizona skies.  Especially in the evening. 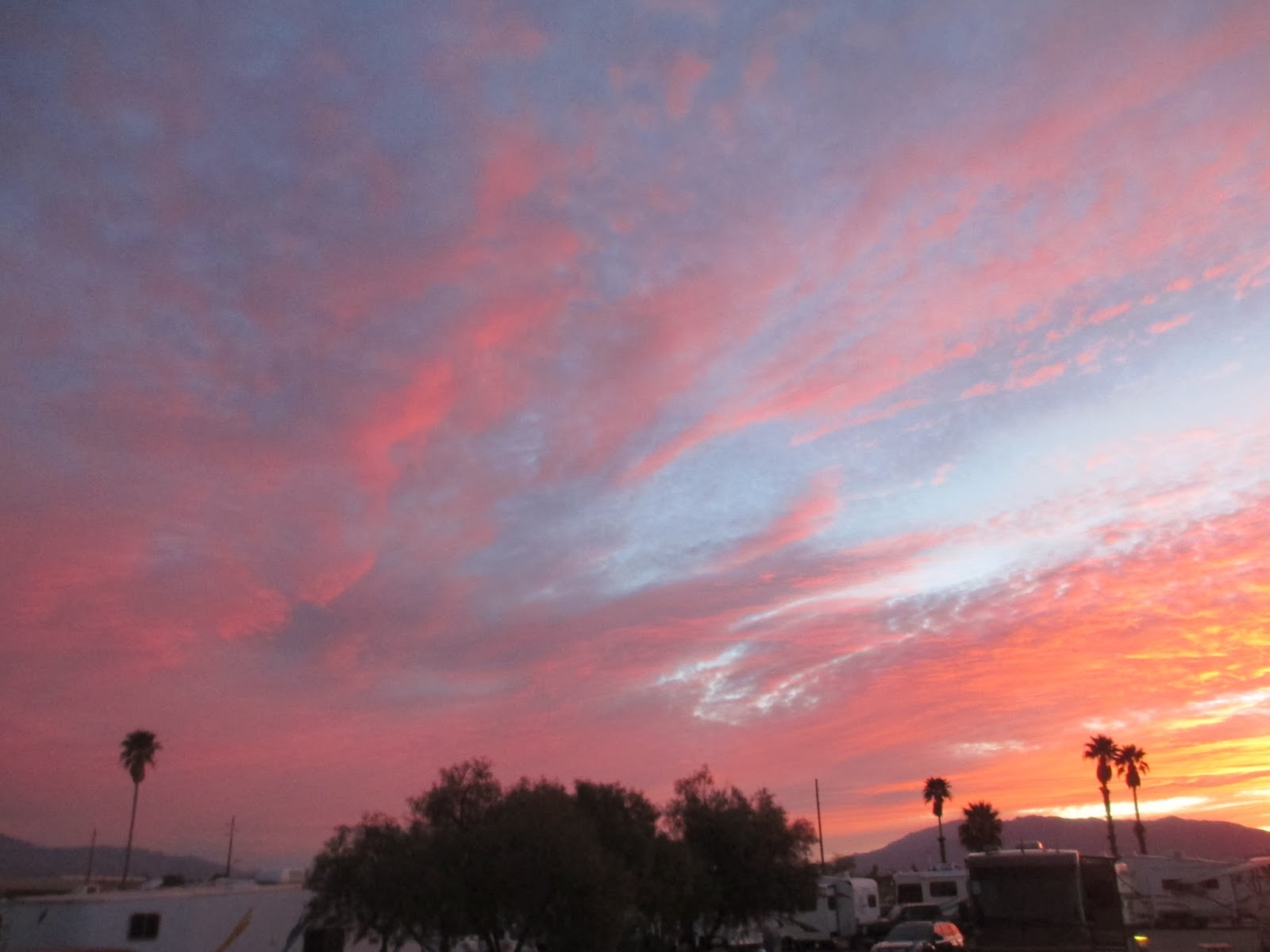 After our 15-20 minute stroll around the campground, we went back to the Roadrunner and Pam opened the door.  But the handle broke.

Yes the spring loaded handle on the outside broke on the inside.  Hmm.
Thankfully it popped open-- but the outside latch was no good. 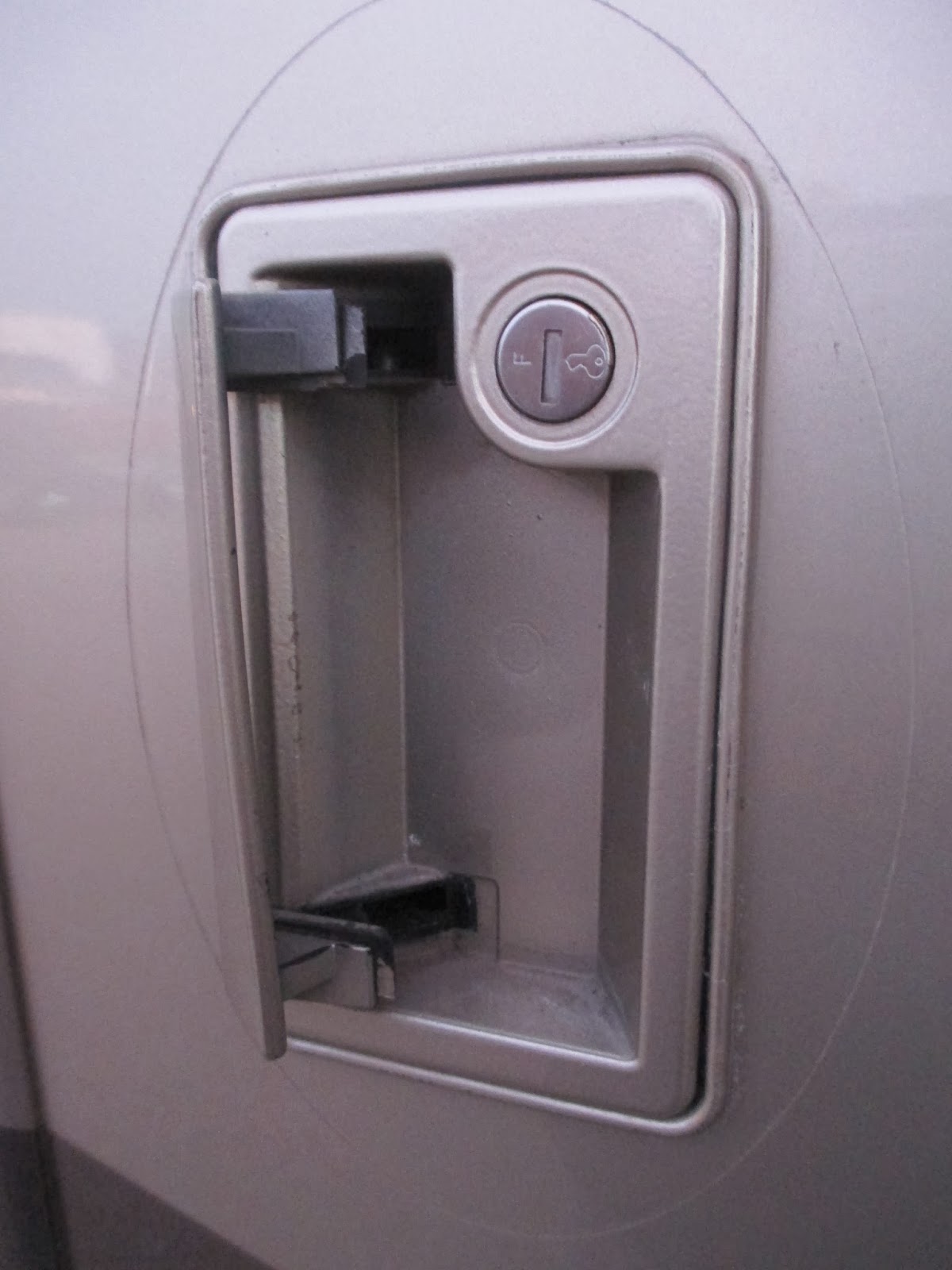 The latch had no life to it and did not "catch" anything. It flopped back and forth, useless.

On the inside of the door, there is an easy access panel.  First I had to remove the deadbolt cover and the inside door handle cover, and then the four screws. 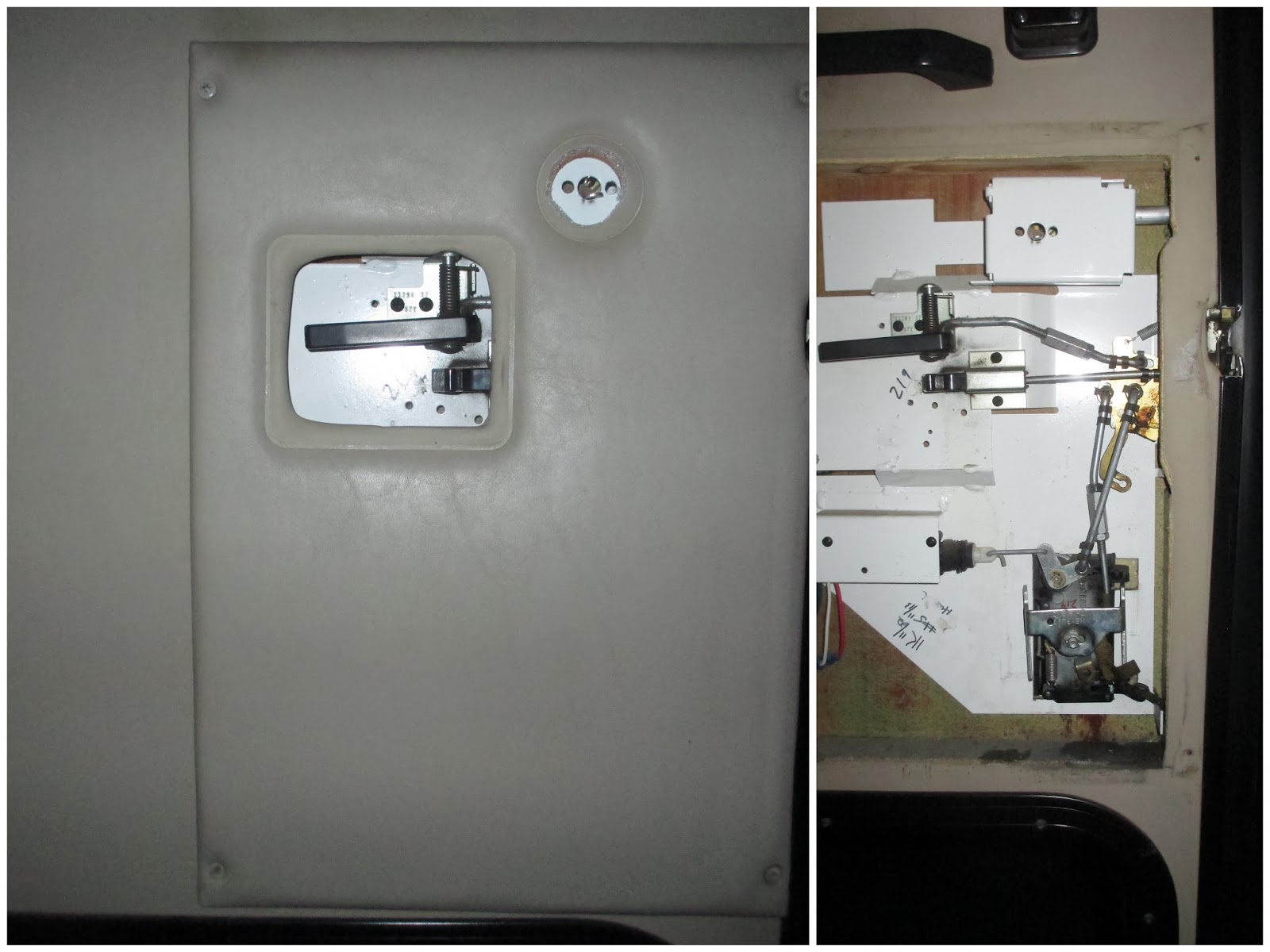 Then we did a little investigation to see what was amiss. 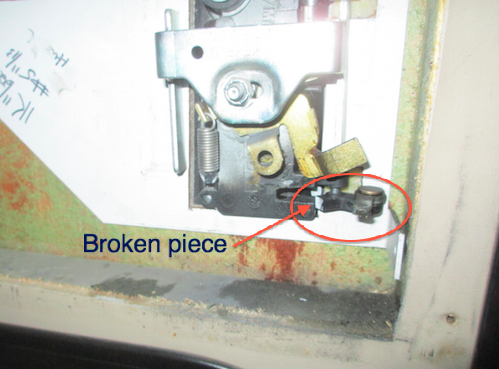 And there it was.  A broken piece a the bottom.

It was dark by now and there wasn't a whole lot we could do.  But we had to figure out how to close the door (without latching it).

The solution we came up with was a bungee cord.  I waited until the next morning to take a picture. 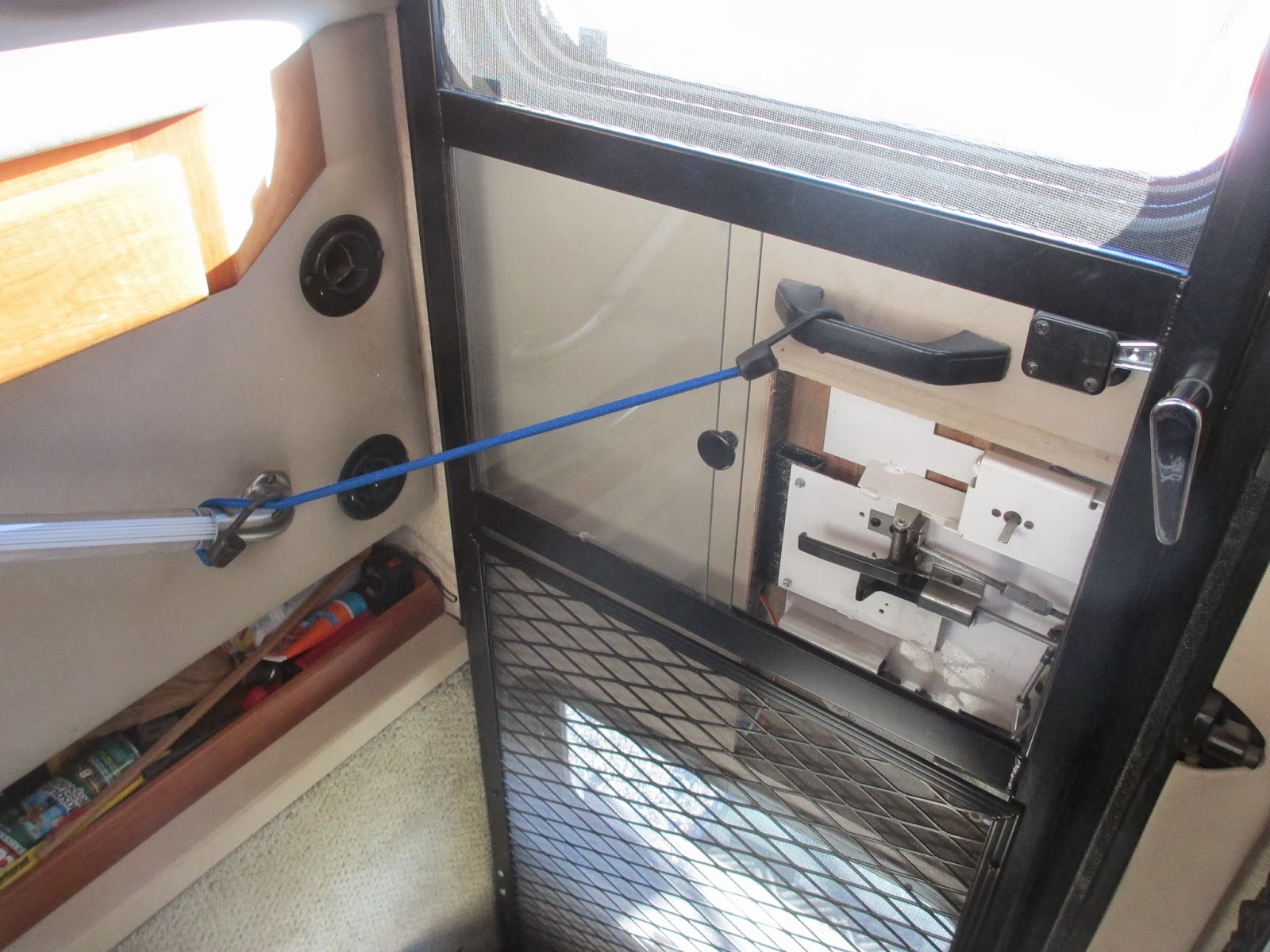 It did the trick.  It closed enough so that no small rodents could sneak into the Roadrunner...

The next morning we got a fresh start on it and proceeded to take get some more tools and see what we could find.  The piece was obviously broken and beyond repair.  We needed a new part or door handle.

We called Tiffin Service Center and had to order a whole new door handle.  I gave them our year, make and model plus our VIN number and thought $31.95 was completely reasonable.

Then we had to wait for the package to arrive but there was no delivery on Presidents' Day.  So each time we left the coach we had to reach in and hook up the bungee cord which pulled the door shut.

After a few days, finally the package arrived and we got to work. 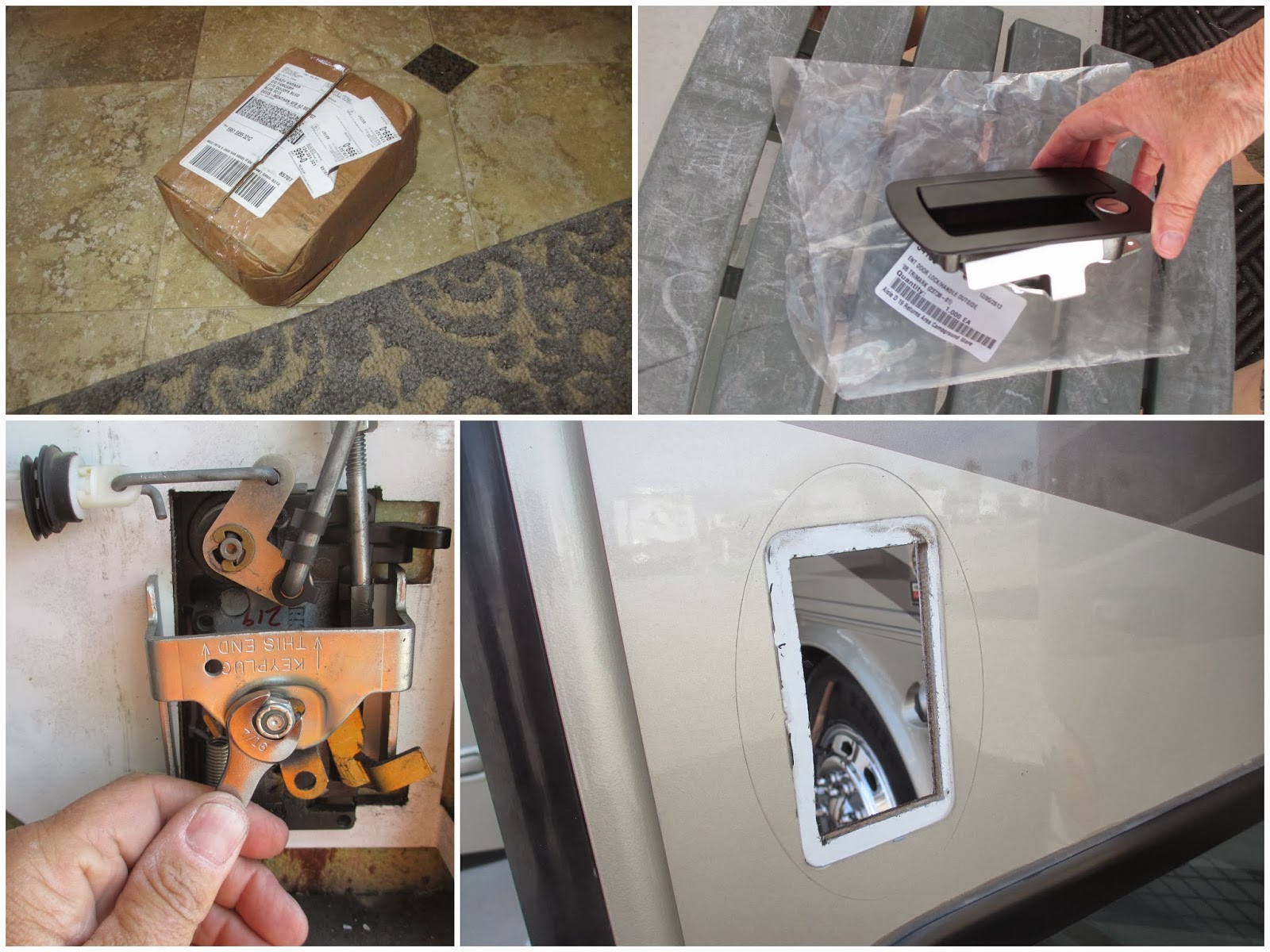 We took a some more pictures and unhook this and that and massaged things a bit and the door handle unit came out.   Then we put the new unit into place and only needed a little persuasion to get it place.

The key to getting the unit in place was removing the clasp/springs that attach to the end of 1 horizontal and 2 vertical adjustment rods. 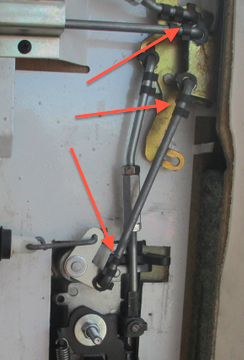 Those clasp/springs were knucklebusters and I had to remove and replace them at least half a dozen times.  It took lots of trial and error before we figured out the correct lengths on the adjustment nuts. 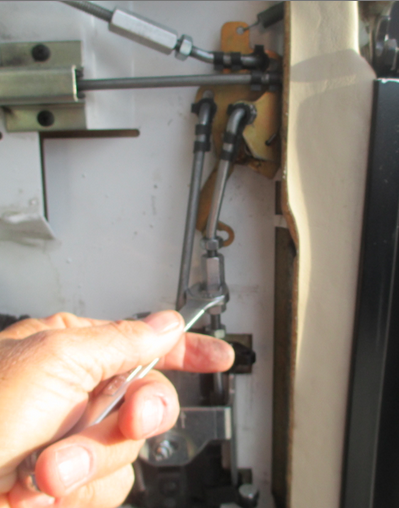 Then we claimed some success when the door closed and locked correctly!  I only have a few photos here but it took at least a couple of hours to get to this point.
We called the Tiffin Service Center and got some ideas and help.  But progress was slow and methodical.  But we made it this far...

Now the only thing left was to get the keyless lock system working correctly.  Hmm.... 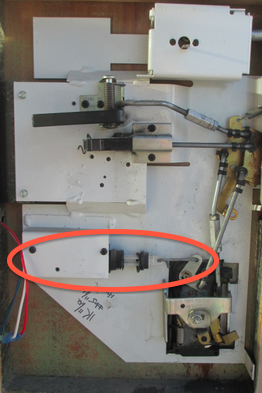 When I took the unit out of the door I had to loosen the screws on the keyless system so I could unhook things.  When I replaced it all, I tightened the two black screws down partially.  It all seemed to be in place.
After a while at trying different things, Pam saw that the screws were not tightened.  I fastened them down and gave it a try.  That was the magic final adjustment.

The latch and the catches all seemed to work with the proper tension.  Except after a couple of times opening it, the inside clasp/spring was getting hung up on some molded metal.  I decided to sand it down and smooth it out so it wouldn't snag.

Here's a photo of my engineering modification using my Dremel: 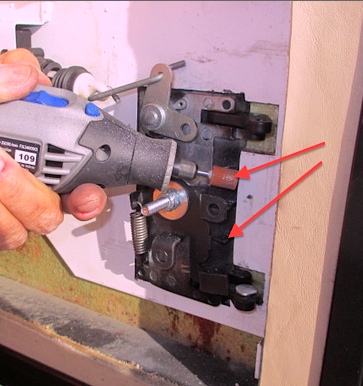 The top arrow shows where I am sanding a piece that looks just like what the bottom arrow is pointing to.  That little piece was snagging the clasp/spring of the vertical adjustment rod.  After I sanded it....

Presto!  It all worked.  The latch, the automatic locks and the keyless entry!!  It was a little surprising to us but a definite milestone in repair and maintenance skills. 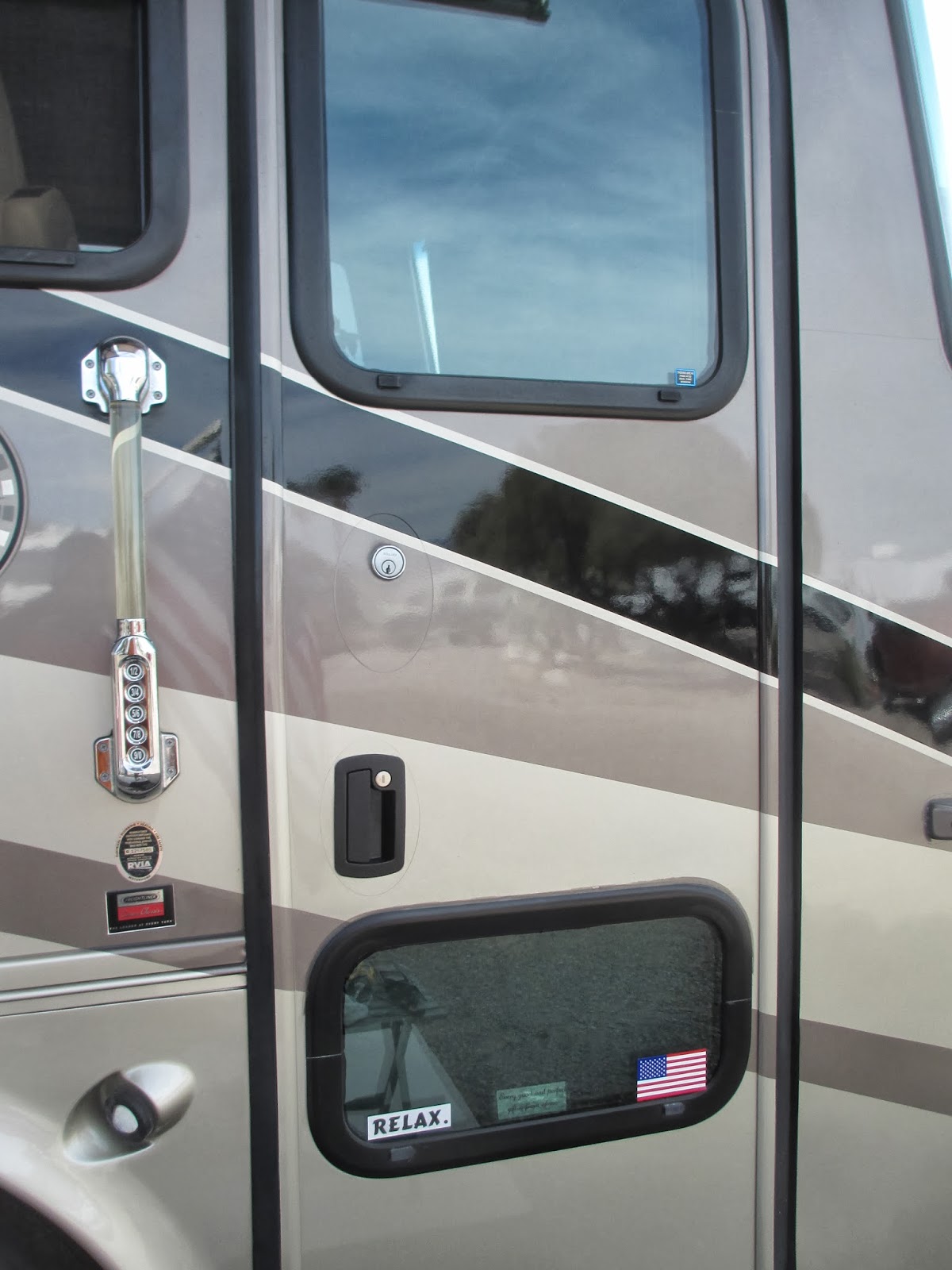 A new door handle and no more Bungee Cord Door!