Another Hike in the Desert

I want to get as many hikes in as we can during the next few weeks.  Just seemed like a fun thing to do.  And we enjoy the National Parks in the Tucson area.  There are a number of them.  Saturday we went back to the Saguaro National Park. 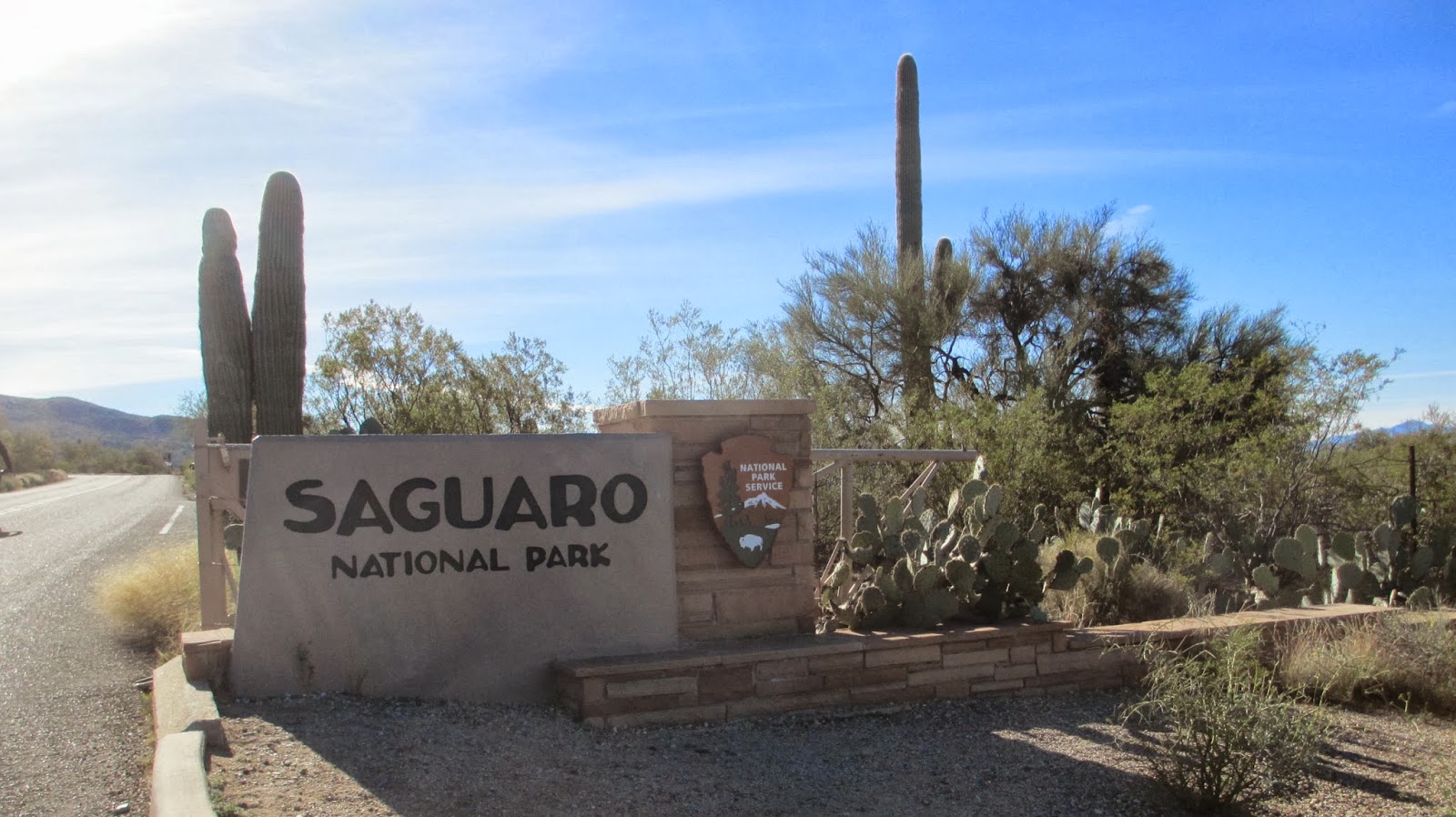 It was a beautiful morning and we were not surprised to see a lot of bikers and hikers.  We entered the park and drove past the Rincon Visitor's Center to the entrance booth where we found out it was a free access day.  No daily fee today!  We picked up a hiking map and pulled over to study it. 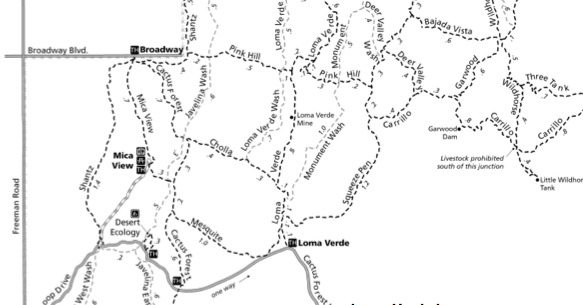 We decided on the area we wanted to see and found the road over to the Mica View Trailhead. 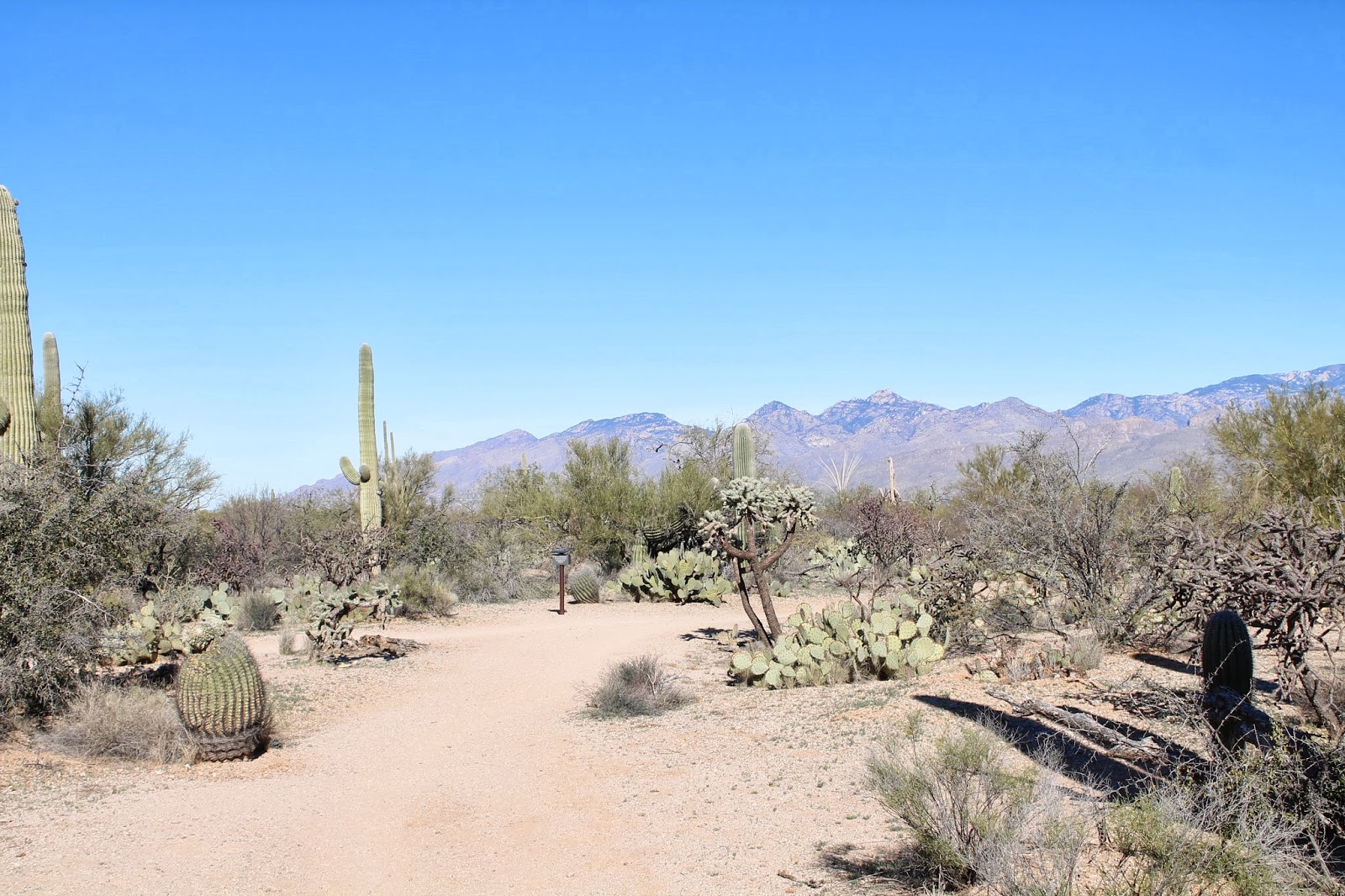 The trails are well used but also well marked and well maintained.  The one we chose was also a horse trail and they had been there a little while before us.  But not an issue, plenty of trails from which to chose. 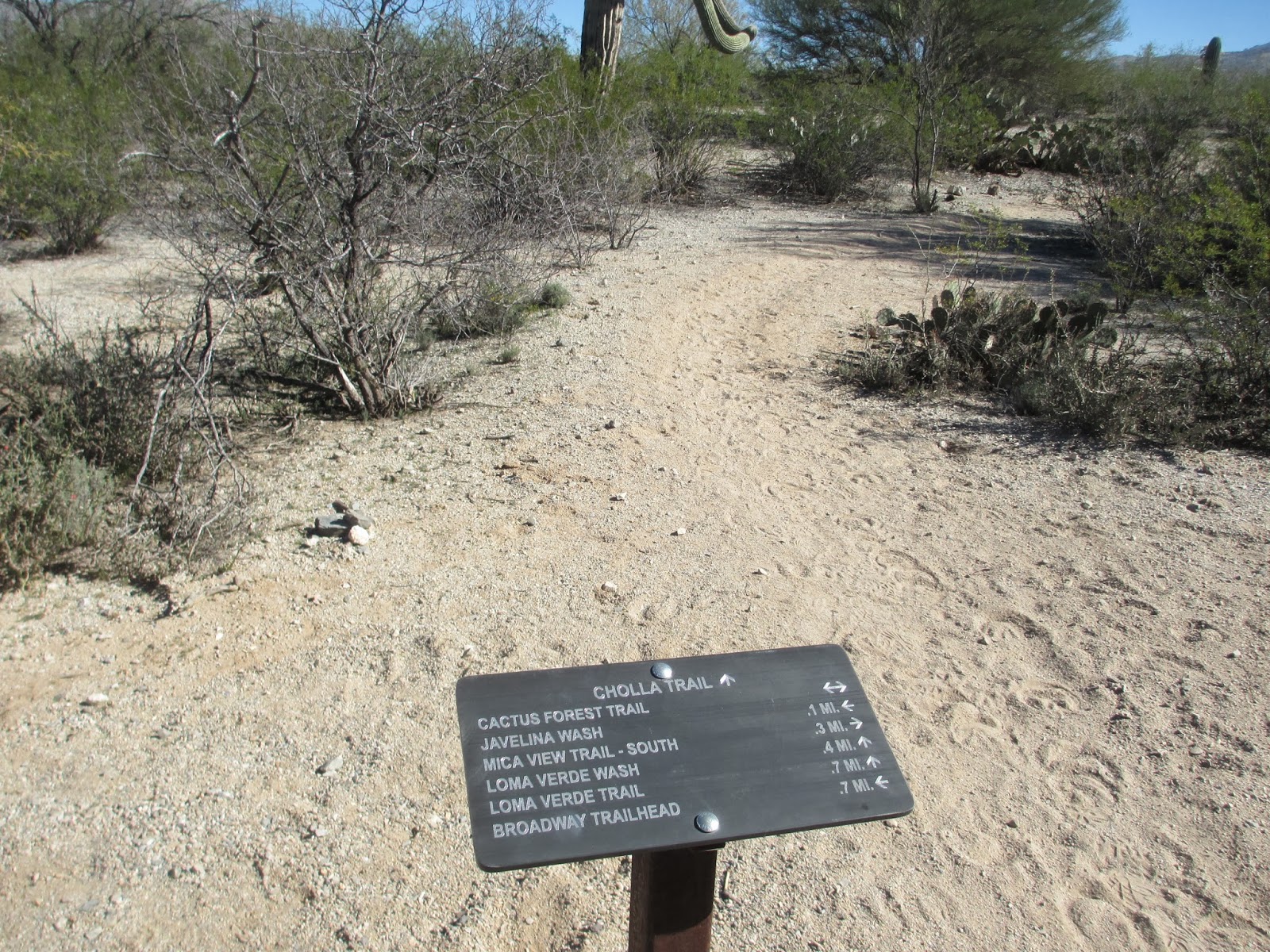 One thing about the desert is that there are lots of vegetation.  The picturesque and majestic saguaro were all around.  But there were also palo verde trees, mesquite, plus chollas and prickly pear cacti. 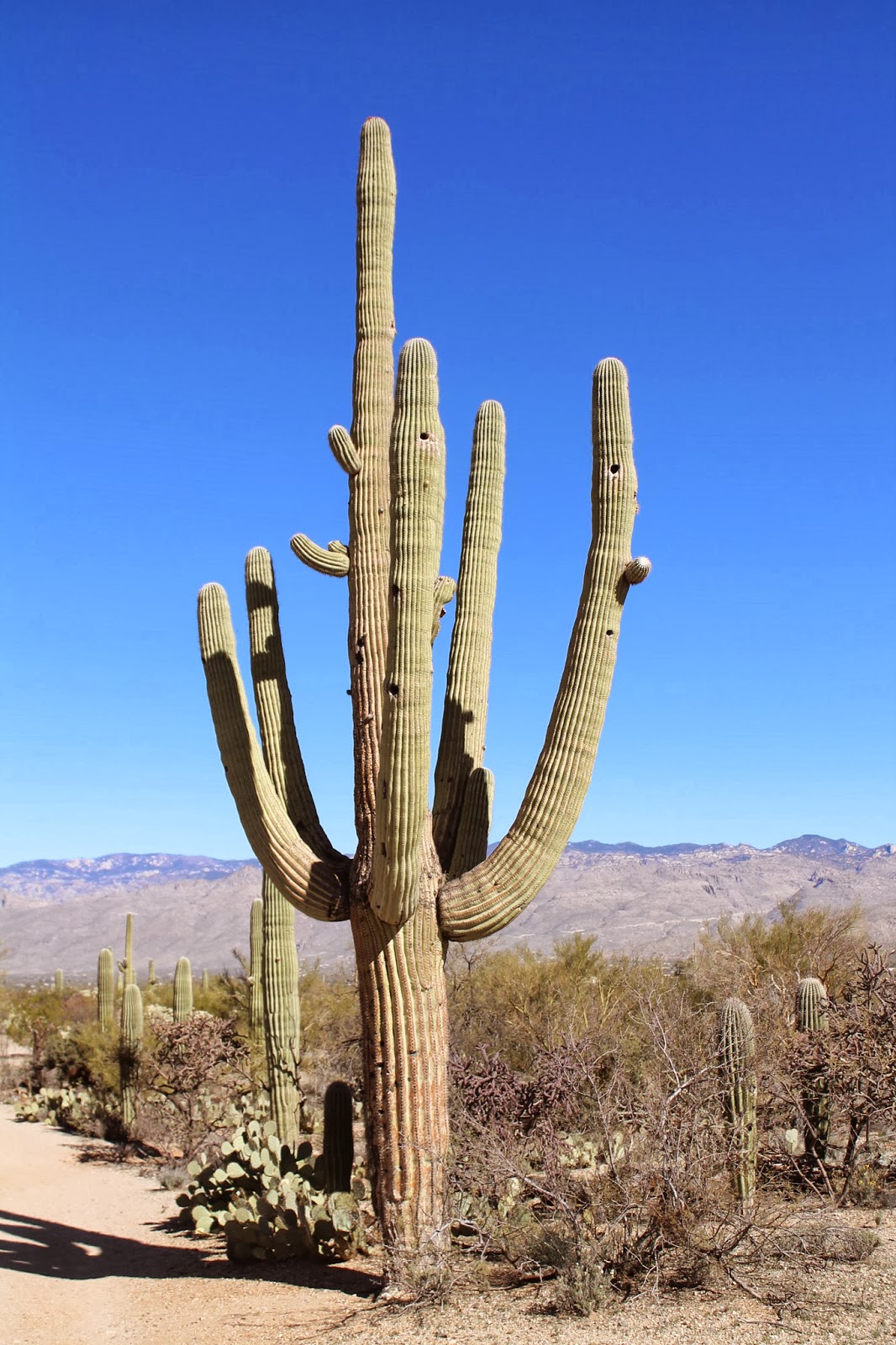 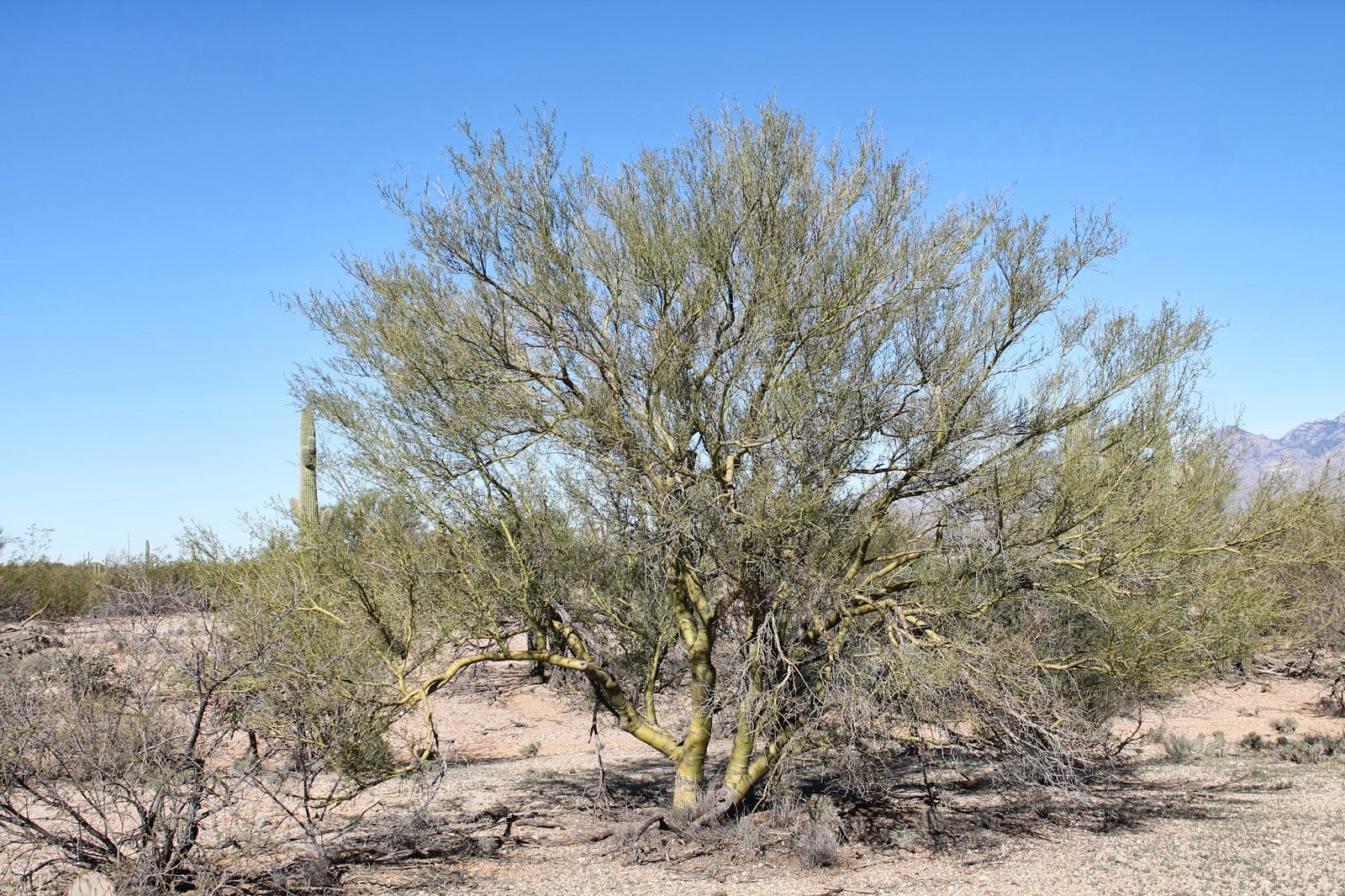 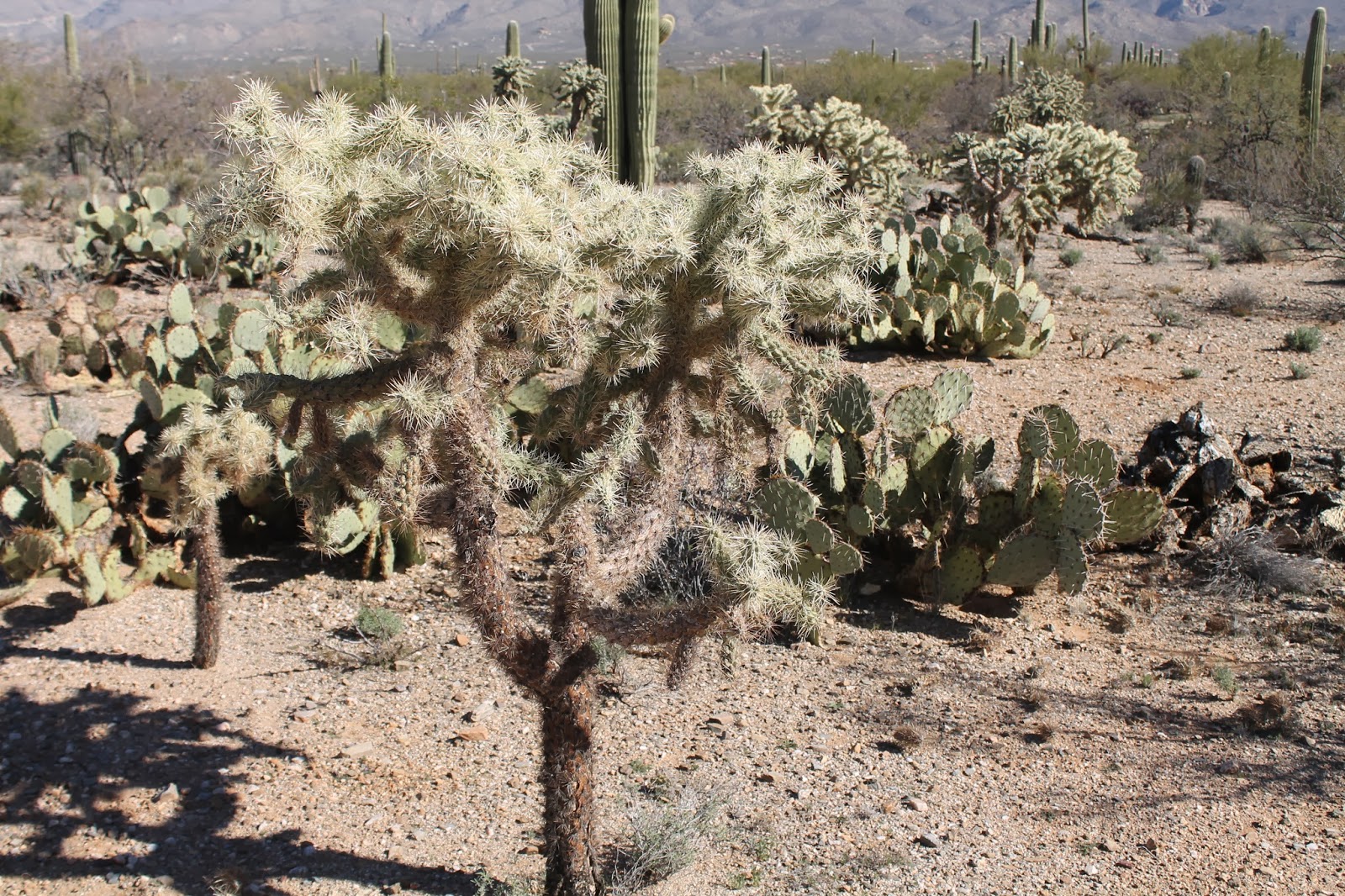 It is a different kind of beauty that is, well -- beautiful!

After hiking a while, we made a turn near the Broadway Trailhead and picked up another trail 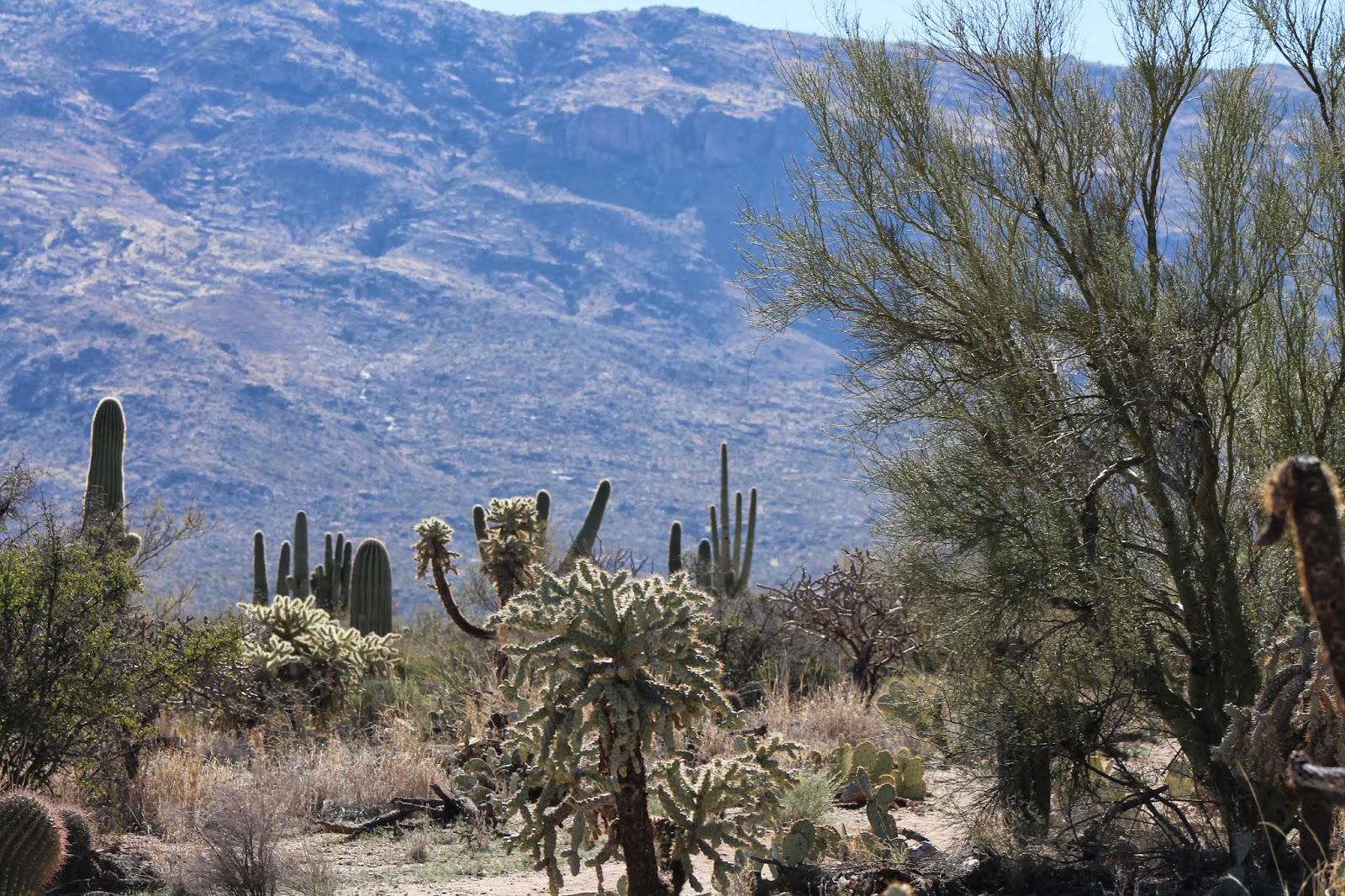 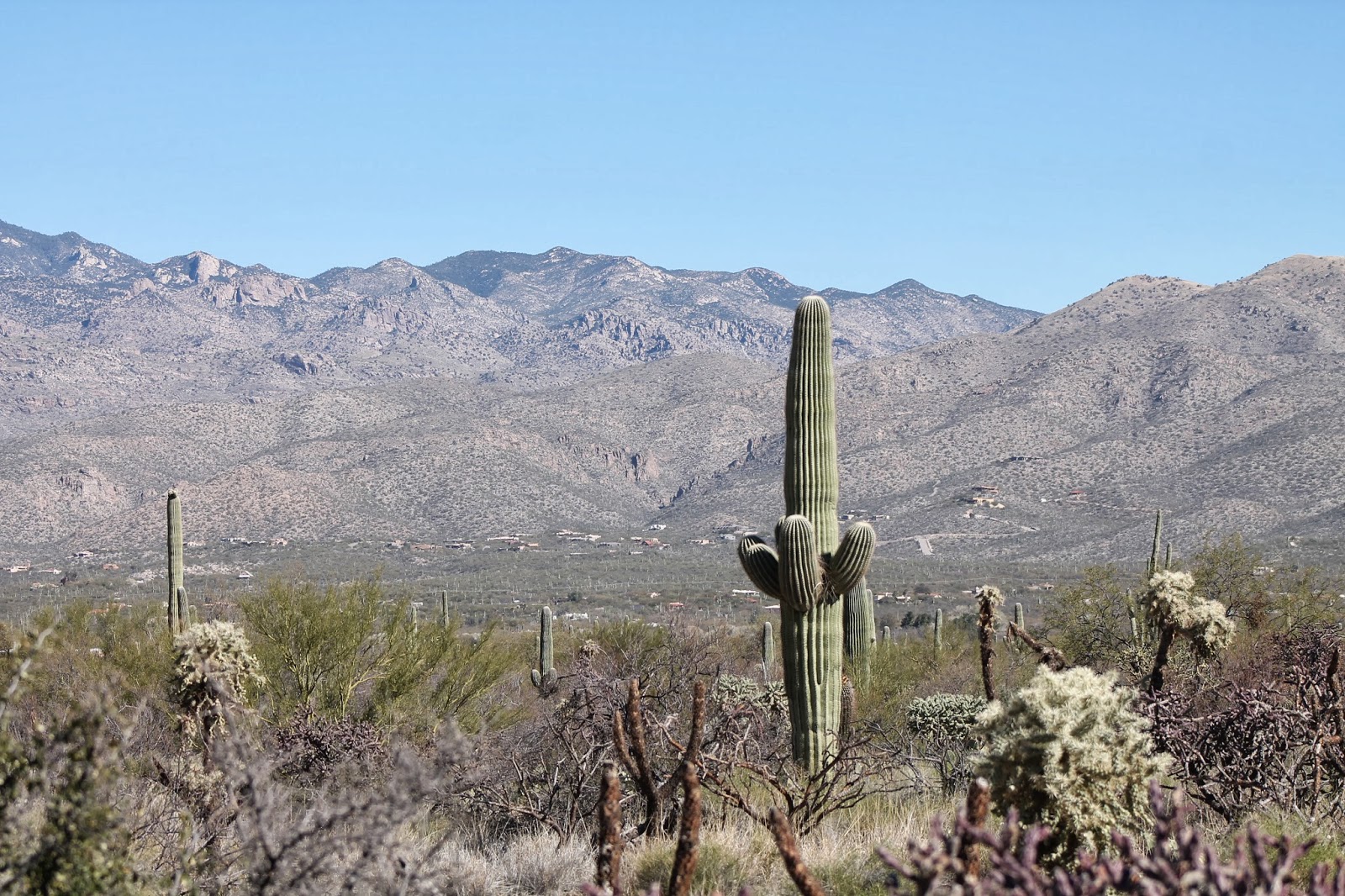 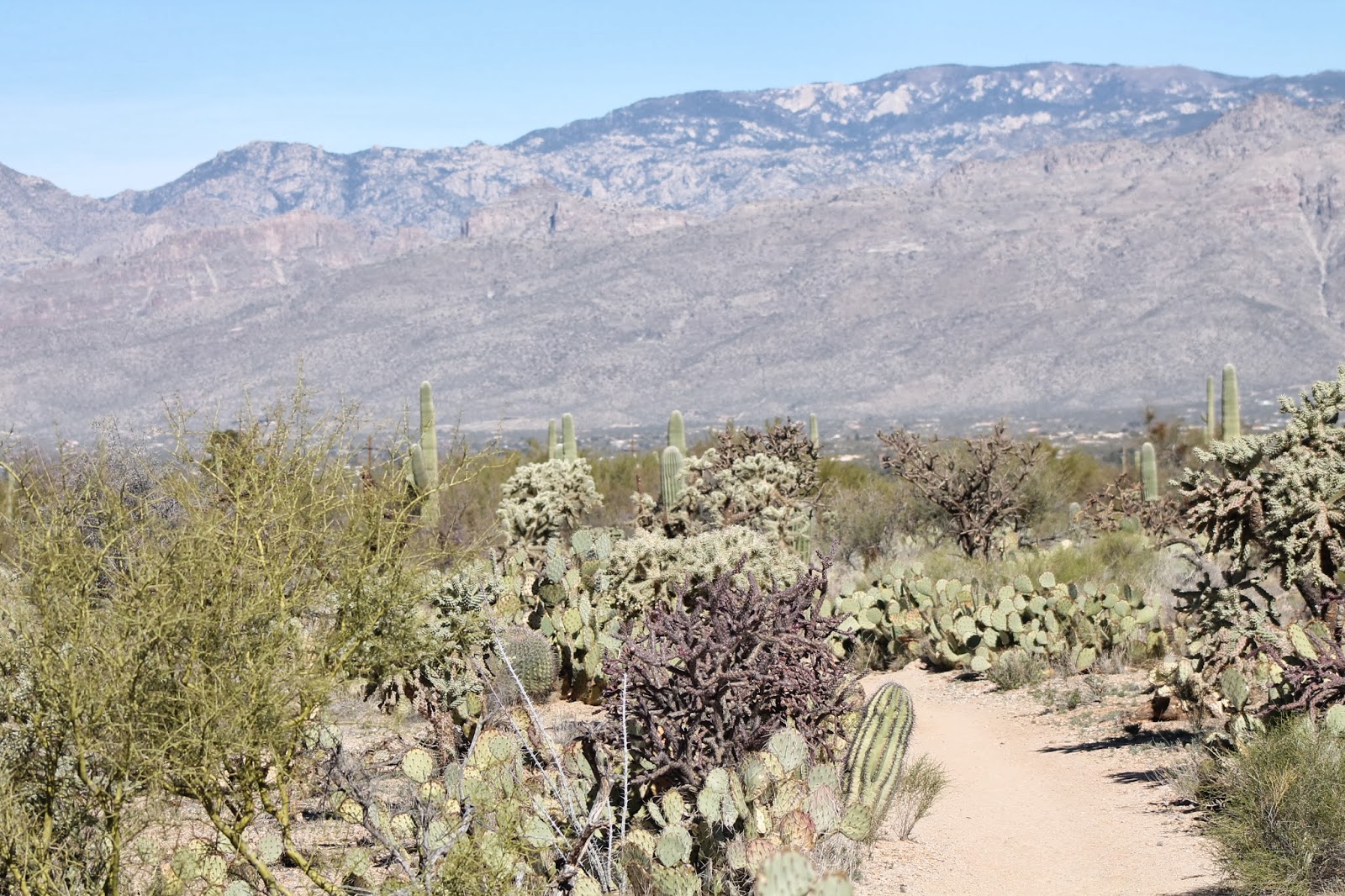 Along the way, we could see erosion control steps along some washes and figured it took a while to build those.  This park has been around since 1991 and is well taken care of. 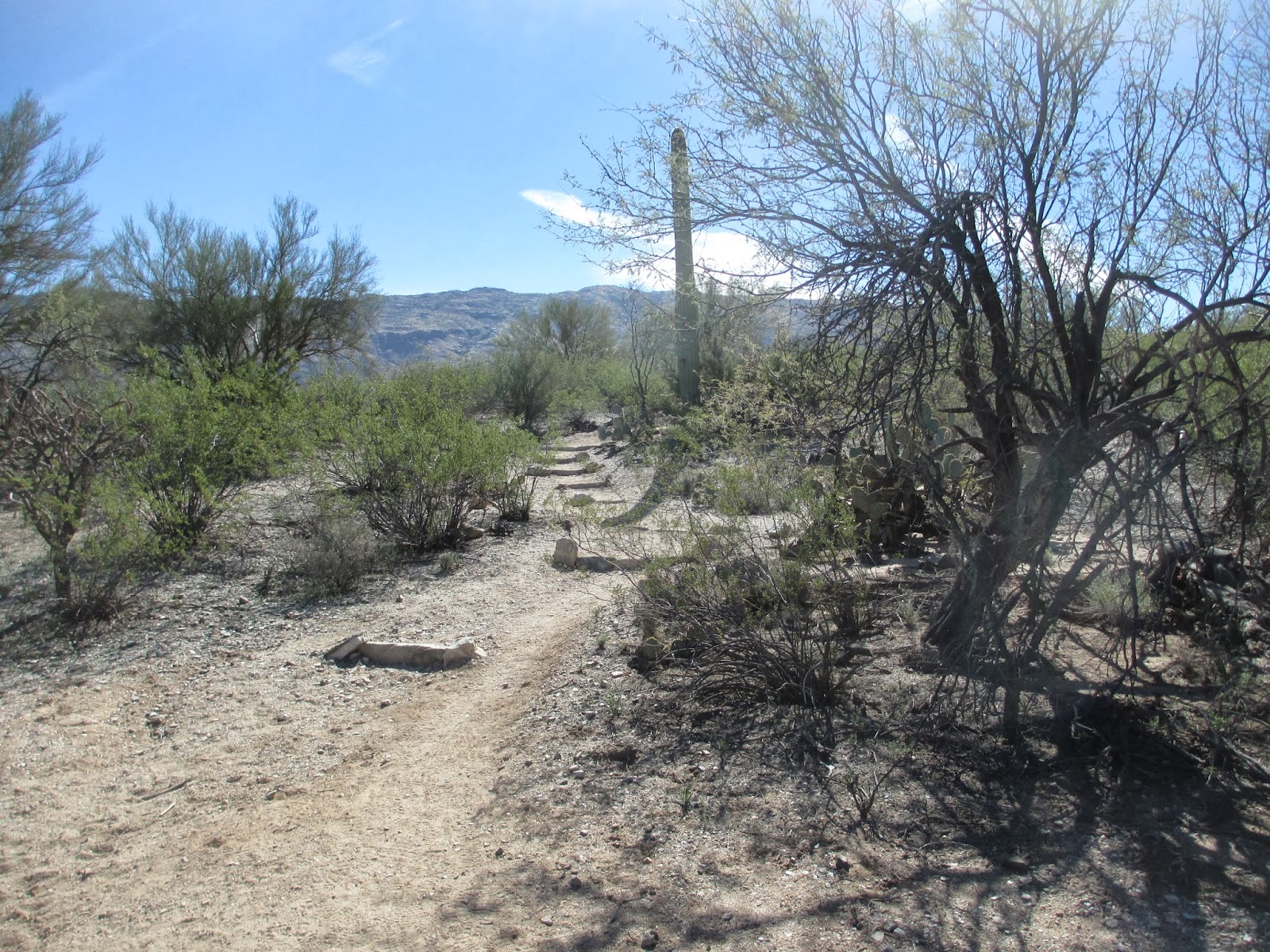 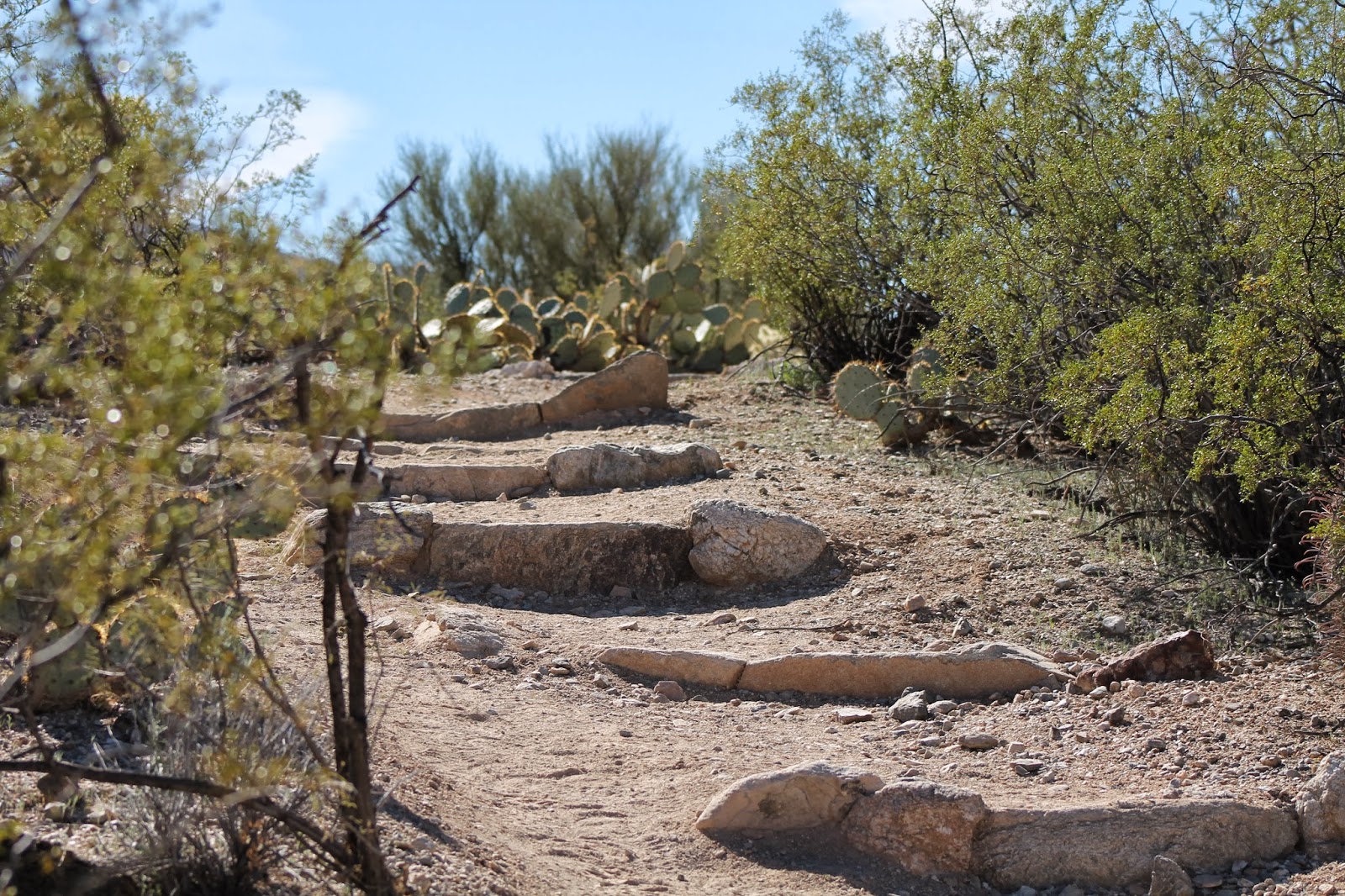 And then one of our favorite moments of the hike.  We heard a bird singing for all its worth and just stopped and listened to it.  We couldn't quite tell where he was.  But we stayed still for a few moments and Pam spotted him in the distance about 150 yards away 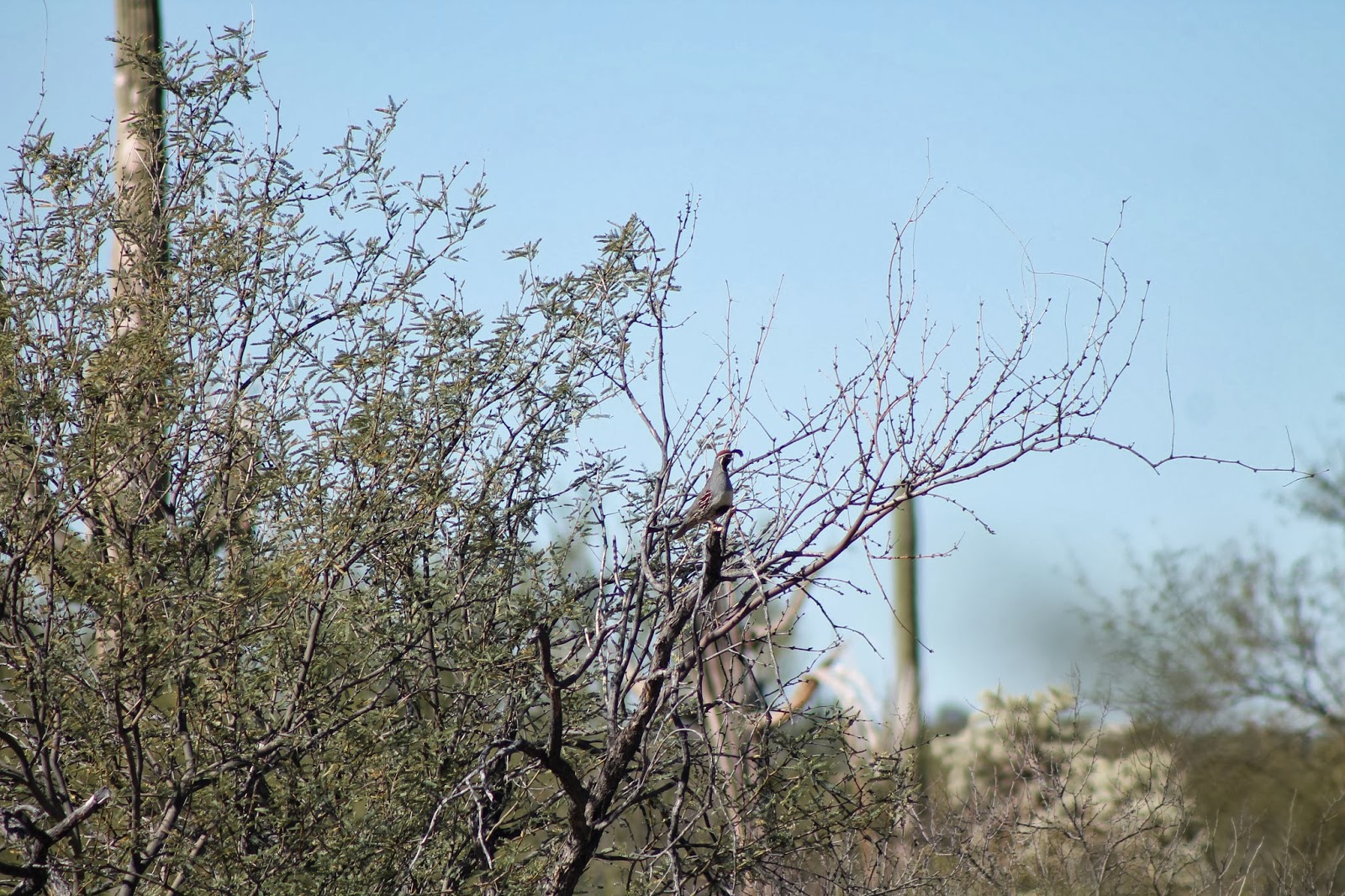 Then we stopped for a picture.  There were a few folks on the trail, but most of the time we had it to ourselves.  And my handy tripod worked fine sitting atop a prickly perch. 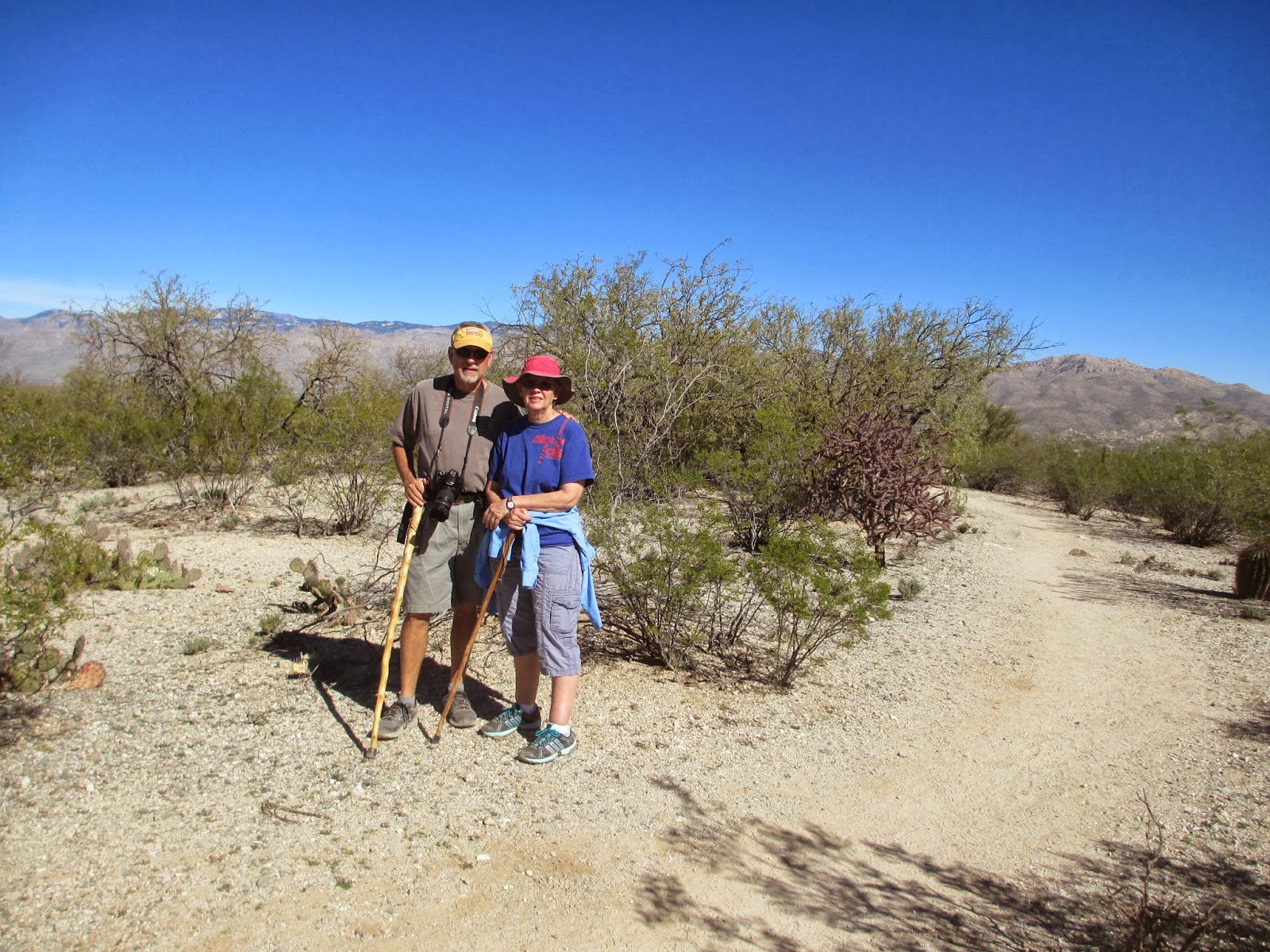 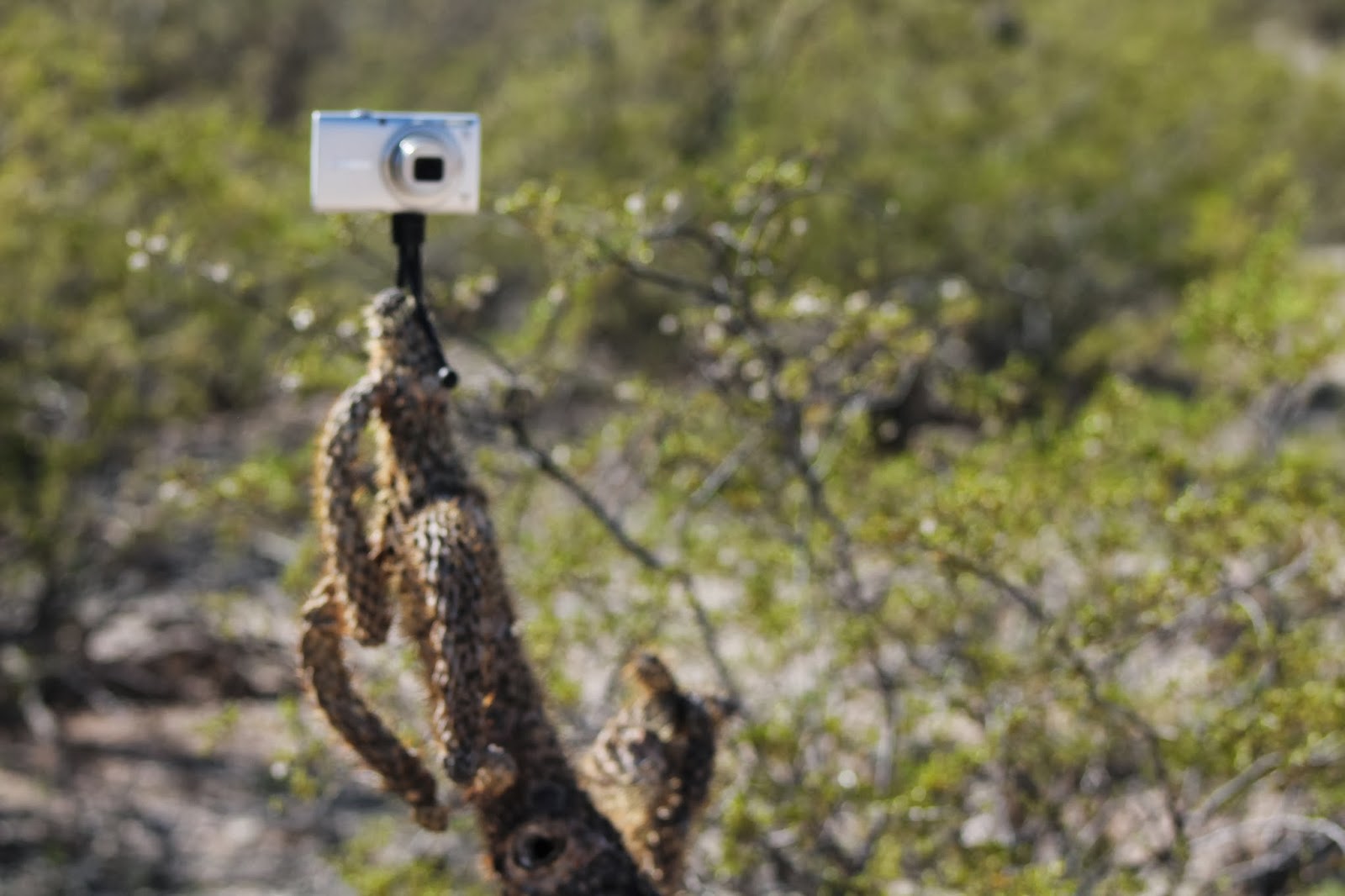 After some good exercise and an enjoyable time, we found our way back to the car. 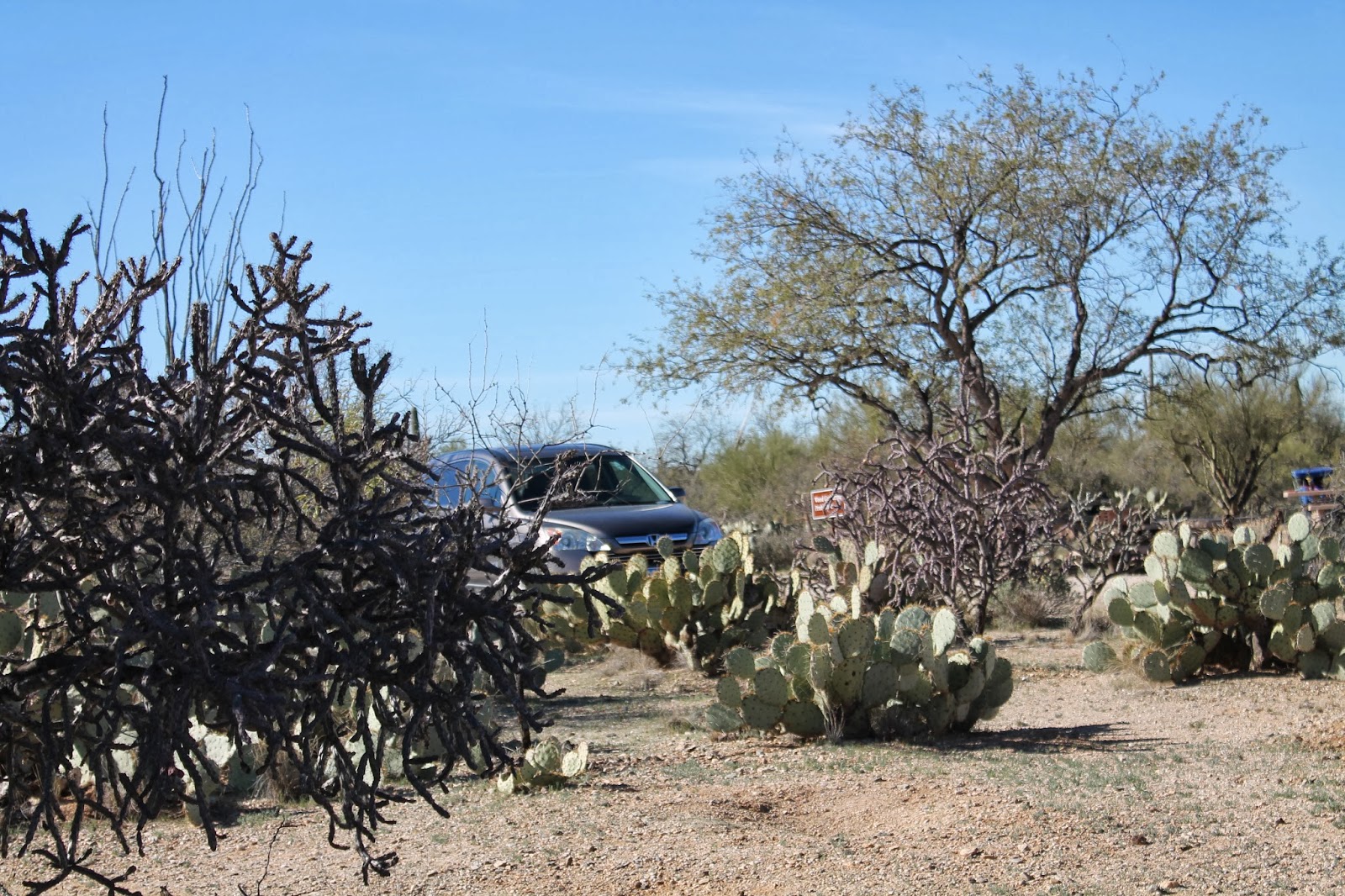 We left the area and went over to the Cactus Forest Loop and took a leisurely drive around the one-way road. 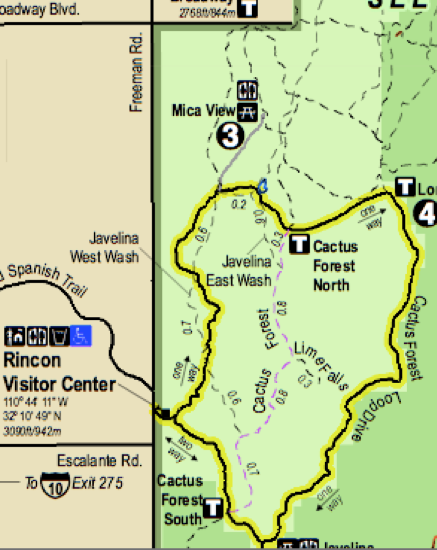 It wasn't too long before Pam spotted a desert creature along the side of the road.  Earlier, the ranger said to be on the lookout for rattlesnakes because they had their first sighting earlier in the week.  But this was no rattlesnake --- 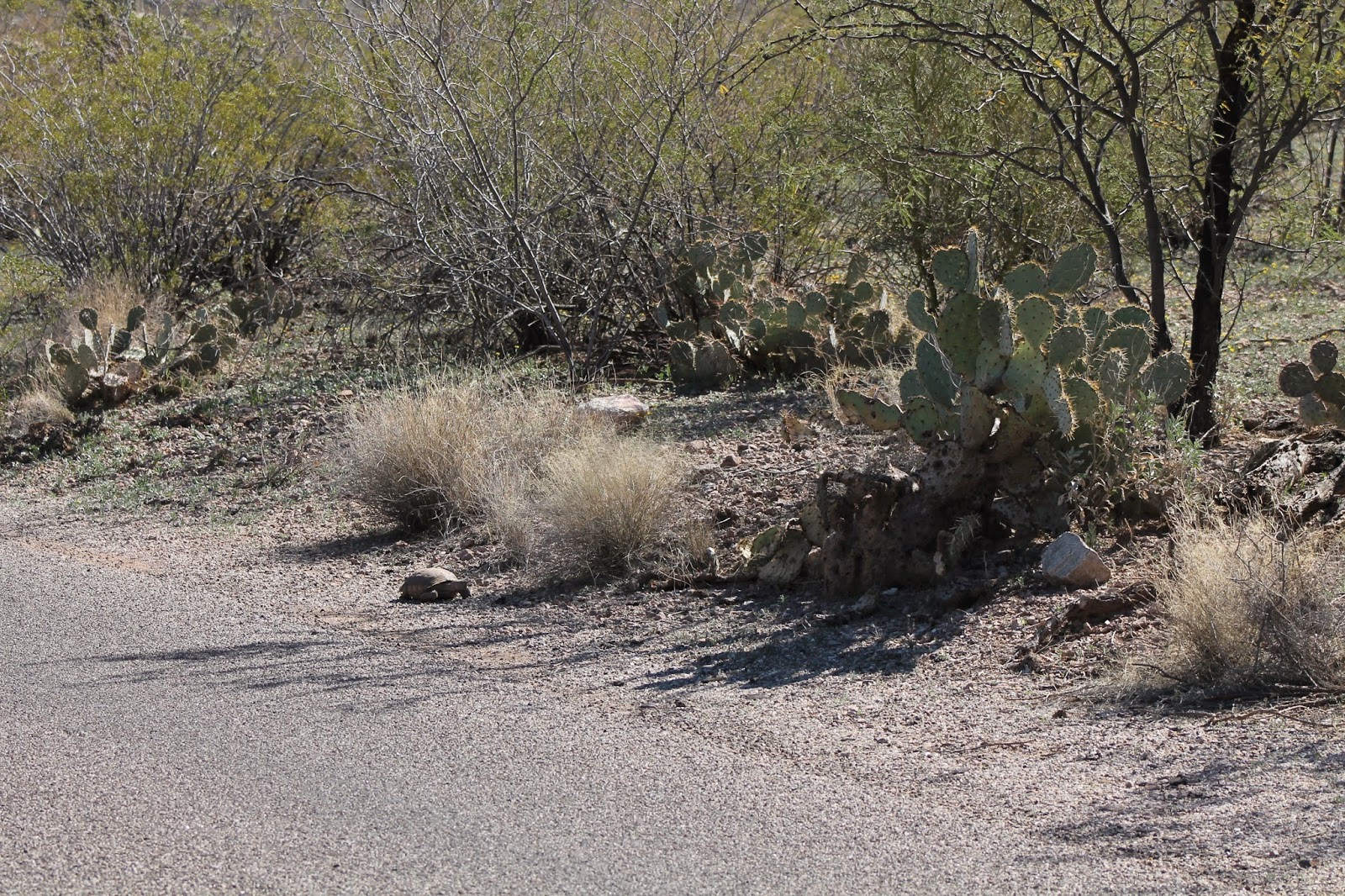 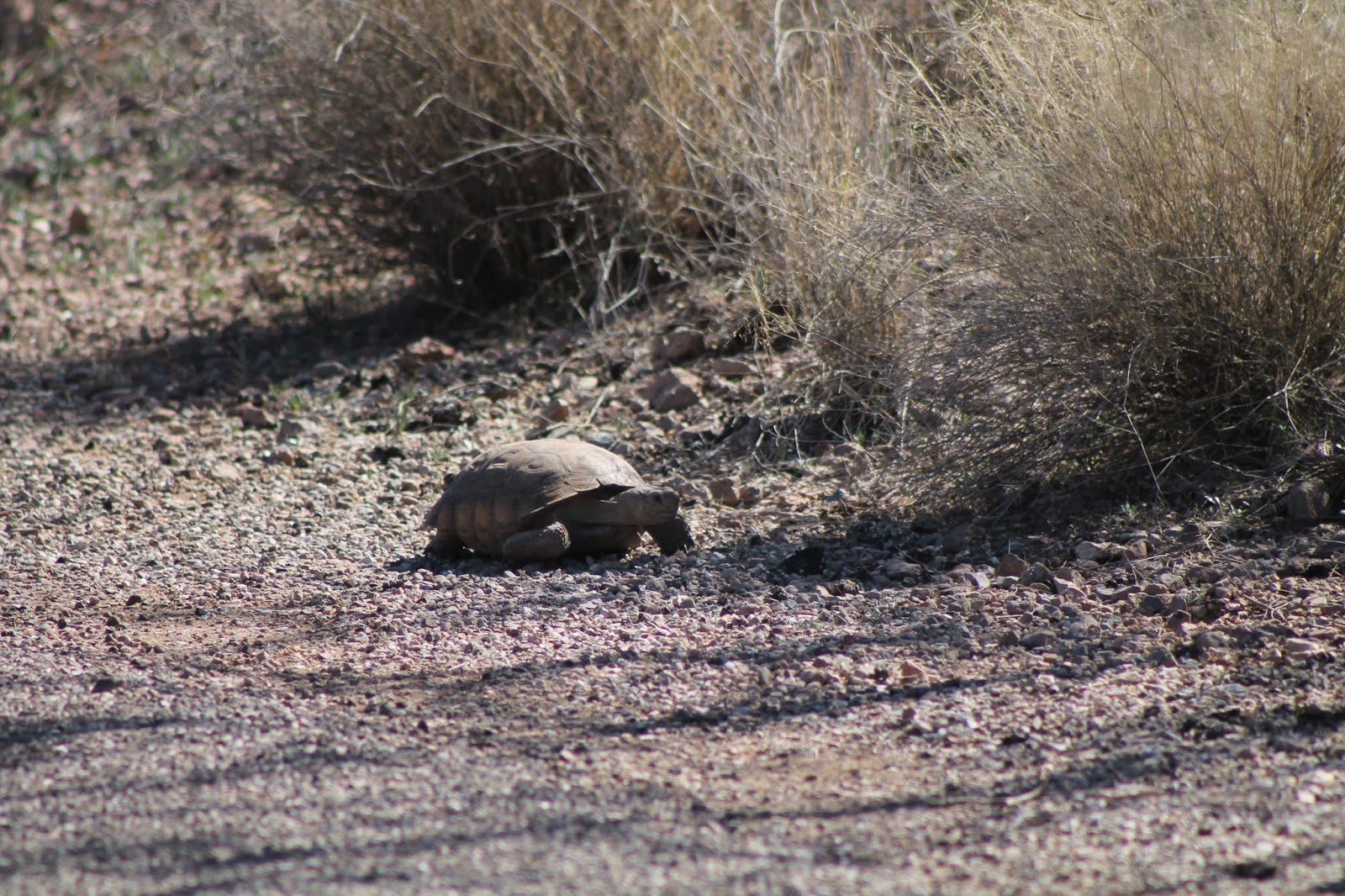 It was a desert tortoise - common in Saguaro National Park but not seen every day.  Boy was that a shock.  In the desert??  We never did see any water.  But apparently these little guys only need a little bit and have been know to store some for themselves to last 12-15 months.

We made our way around the Loop Drive and stopped at a couple of overlooks for some great views in a couple of different directions. 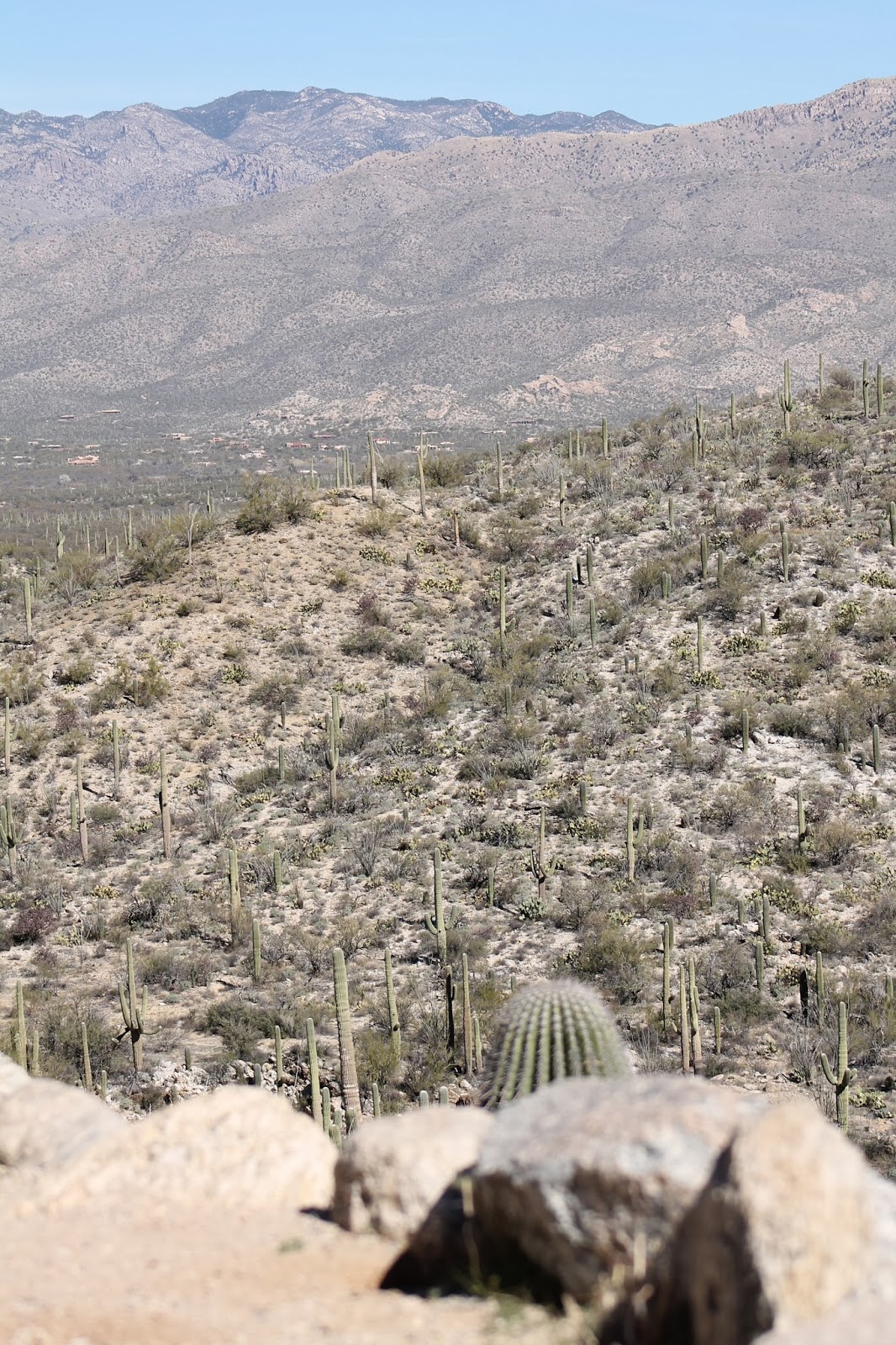 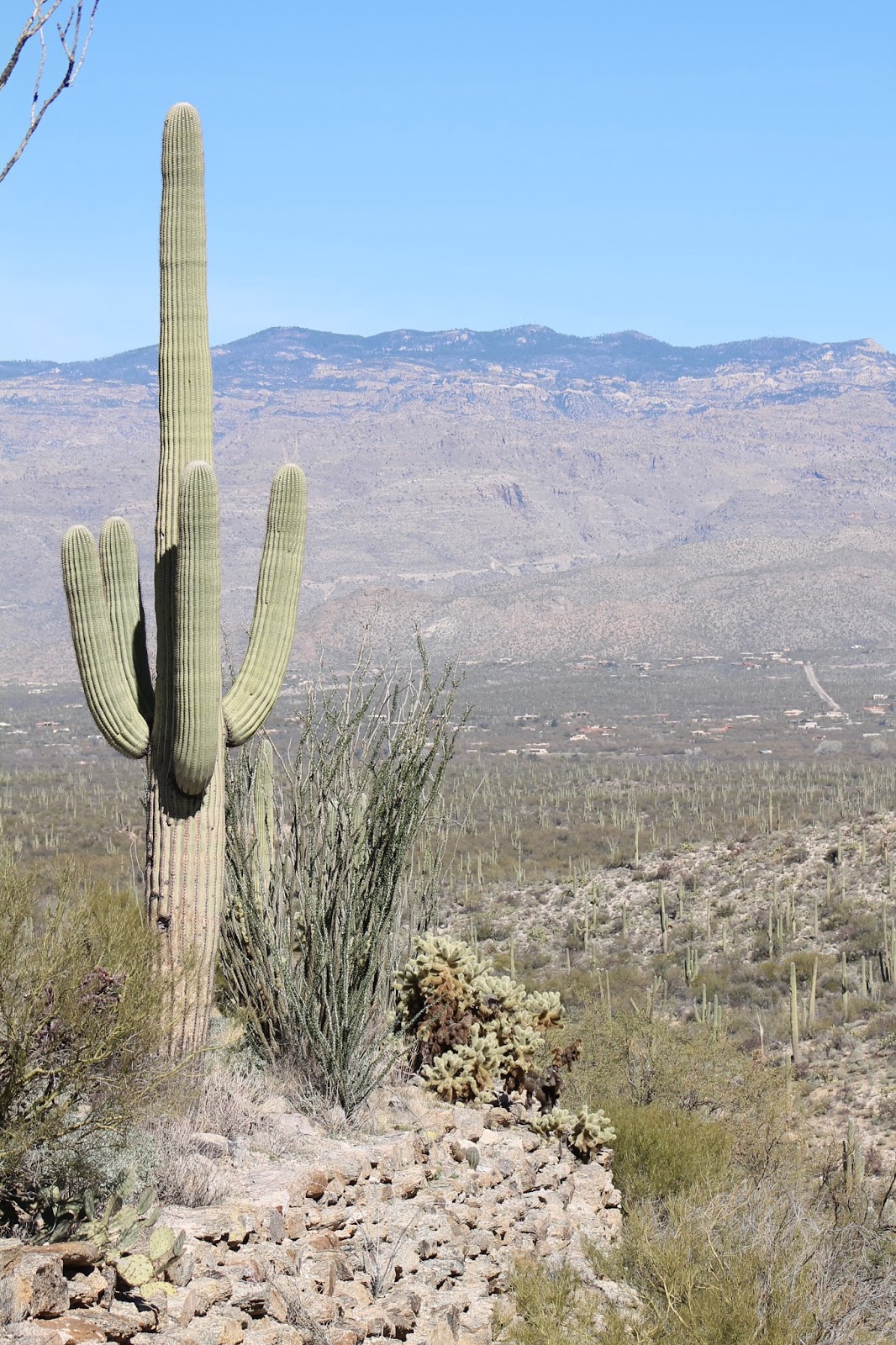 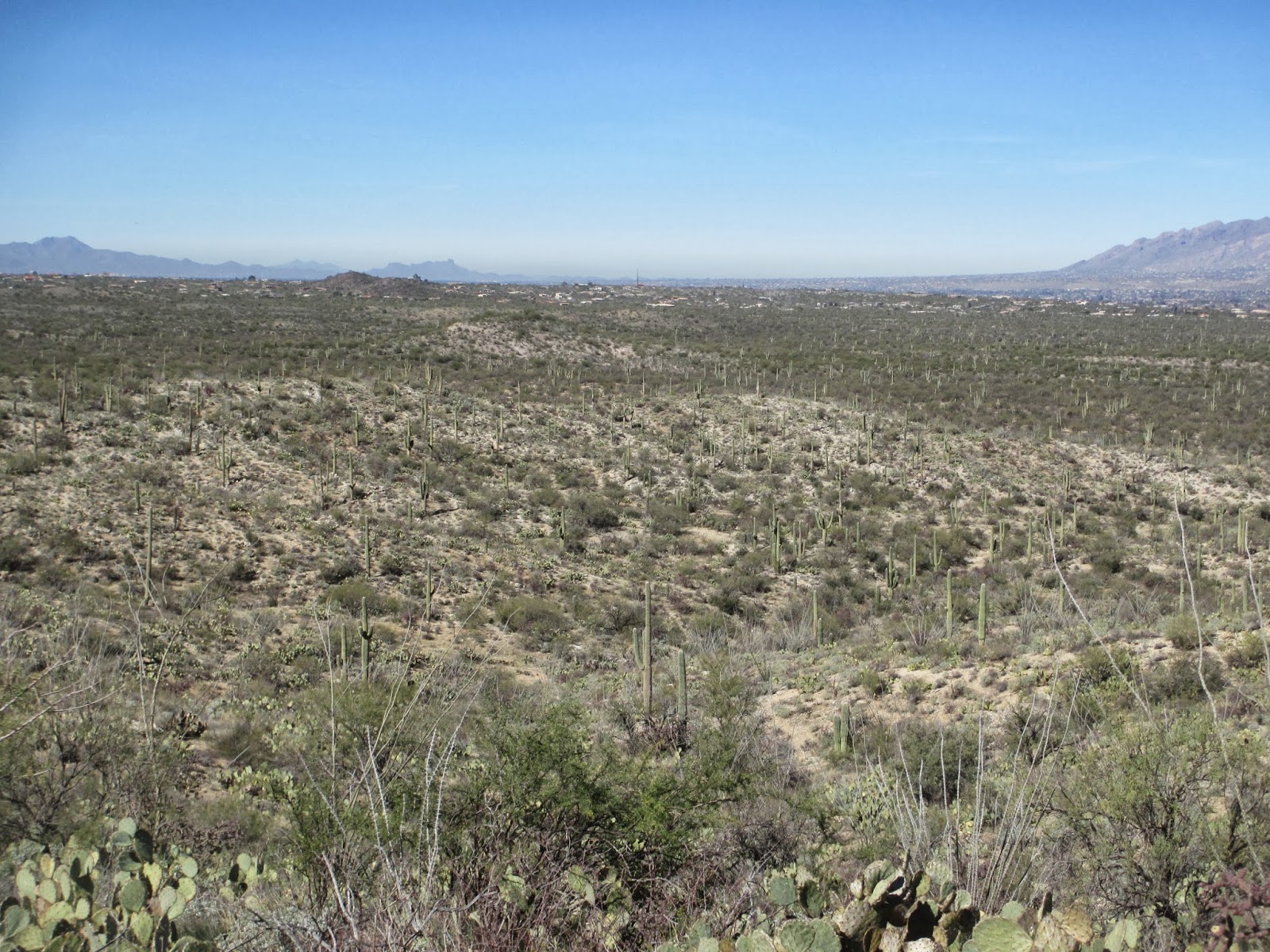 One thing I like about Tucson is that there are a lot of different parks nearby with some great hiking trails.  The Saguaro National Park (East) is a few miles from Davis-Monthan AFB where we are camping and it took about 15 minutes to get here.

We had a nice hike and spent a couple of hours getting some exercise enjoying the desert and warm 80 degree weather.