Brothers vs. Brothers at Torrey Pines

A few months ago we knew we were going to be at Del Mar to see Rob and Chris and everyone for Thanksgiving.  When we first visited here in December 2009 we discovered Torrey Pines just a few miles away.

Torrey Pines is one of those famous Championship municipal courses that is open to the public.  I thought about it and asked Marty if he would be up for 18 holes at Torrey Pines after Thanksgiving.  He was and we were aiming for a round of golf on Monday.  But then we talked about Sunday and asked Rob and Matt about the possibility of us all playing.

Sure enough, Rob set up a tee time for us (twilight rates) at 12:30 P.M. on Sunday.  So we locked that in.  And it was a day to remember!  I arrived early enough to practice my putting a little bit.  And took some pictures. 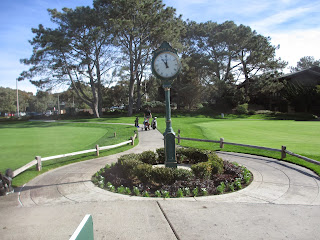 The practice putting green near the clubhouse.  The clock indicates the course was built in 1957.

When everyone else arrived, we hit some balls on the range and practices some putts before we teed off. 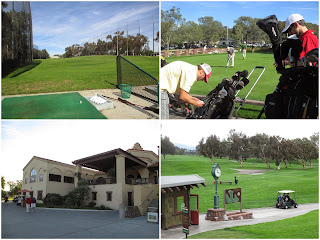 The course was in fantastic shape!  The fairways are surprisingly wide.  But the rough is deep.  And so were the traps! 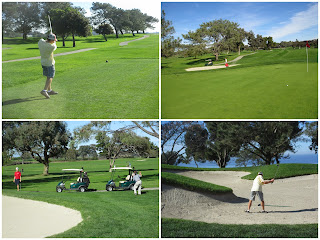 The views off many holes were simply majestic.  Breathtaking.

I think this was hole #3.  Marty was aiming for the green down below.  In the distance along the horizon in the middle of the picture is San Diego. 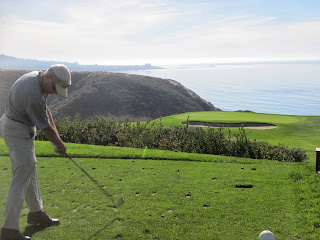 We were in no rush and stopped for a number of photos along the way.  It was a simply gorgeous December day. 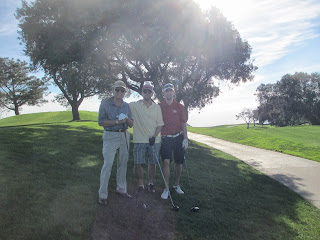 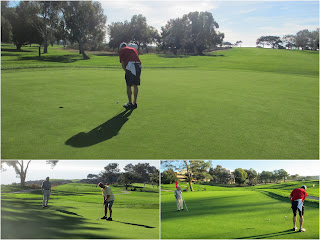 We all hit some good shots here and there, but no one had a particularly good day.  I think I'd say it was about as good a day one could have on the golf course while playing some not-so-memorable golf.

But it was a once-in-a lifetime type of place.  With two nephews (Rob and Matt) vs Marty and me. 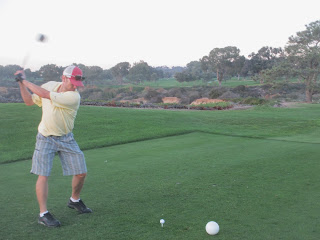 The matches were close both nines but Marty eeked out a win.  But we should have since we have a chance to play a lot more golf than these guys do.  It was loads of fun and they can really smack that golf ball!

Another group shot, this time we figured out the time delay mechanism on the camera. 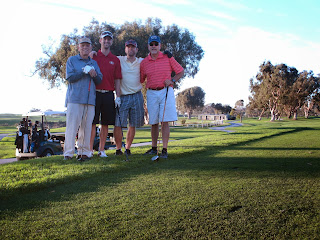 Marty is the real student of the game and the golf swing.  We always learn something from him.  I kept our match fairly close until the last three holes.  Then I promptly imploded.  Or rather got into the deep sand traps and couldn't get out. 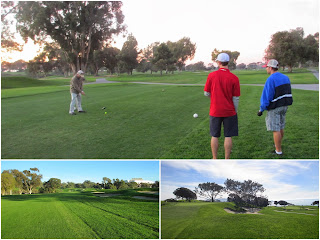 Not surprisingly, Marty beat us all.  And he and I won the match between Rob and Matt.  But the most fun of all was just being out there with them.  It was a pretty fantastic time.

We knew it would be close and the last few holes we were trying to get in the club house before the sun went down.  I must have taken 20 pictures of the sunset... 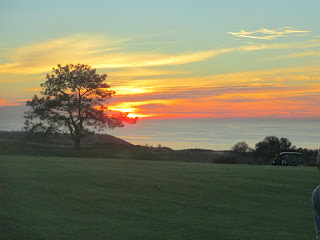 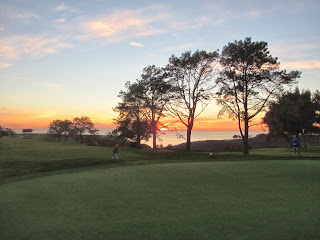 Sometimes the camera makes things look a little brighter than it actually is.  It was really pretty dark out there by the time we finished up. 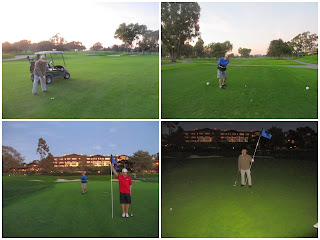 And one final group shot. 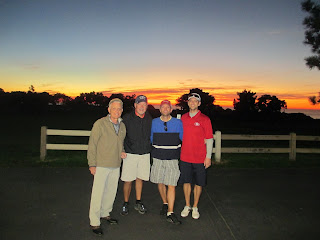 So there is a look at Pam's Christmas present to me this year:  a round of golf at Torrey Pines South.  A beautiful day with my bro and his sons.