Broke Down in Lake Elsinore

We left Jojoba Hills about 9:00 AM on Thursday headed for Seal Beach.  It was fairly uneventful and a bit cool on the weather side.  We were cruising along on I-15 passing through Lake Elsinore when our day changed.  I heard a shrill alarm along with a very red check engine light and immediately pulled over to the shoulder and stopped.

Over the past few months this has happened maybe four or five times but usually after some seriously shaky roads or some bumps in the roads.  Sometimes a bridge transition would jar the Roadrunner and the alarm would go off.  I'd pull over, stop the engine and all would be fine.

Plus I was losing my gauges fast.  The needles on battery, temperature, oil and water went south.  The air pressure needles were not affected.  Hmm.  I pulled off a little farther into a wide area off the pavement.

Pam immediately said, "Looks like we lost our computer."  I didn't see any computer on the dash -- only the gauges.  But she was right -- the gauges are all connected to the computer.  We have an ISL Cummins engine on an XC Freightliner chassis.

In our 4+ years on the road, we have had to have the Roadrunner towed once before.  We broke down outside of Waco and were towed into Dallas.  But it took three attempts before we got a wrecker big enough to hoist our 40' diesel pusher.

I checked to see if I had renew our member ship with Coach-Net.  I thought I did but wanted to make sure.

Yep, so that was good.  Next we checked our location and found a couple of Freightliner repair shops near our location just south of exit 78.  We called one that was not an option then another in Fontana, almost 40 miles away.  Hmm.  That may be a problem, not sure if that is the closest one.

In our Waco experience, they tried to tow us back to Waco and we wanted to head toward Dallas.  Eventually, they agreed to Dallas.  This time I wanted to have some options in mind and not be at their mercy...

I called, they were very prompt and agreeable.  They took all our information, said they'd call us back after they checked on where to tow us and who could do the job.  25 minutes later we discussed getting towed to a different Freightliner place in Fontana.  They even said they have Express Service and would promise to check things out and give us an initial estimate of the issue(s) and the fix(es).

Next, they said the trucker towing company should be calling us in a bit.  OK fine.

Sure enough about 20 minutes later 'Brothers Towing' called and said they'd send an operator in a few minutes.  About 15 minutes later Jon showed up. 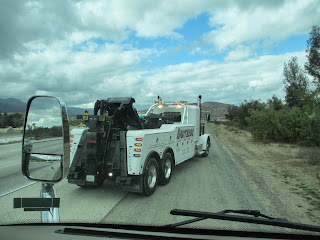 I was very impressed when the young man got out, introduced himself and we all discussed the situation.

Then he began doing his thing and was very careful. 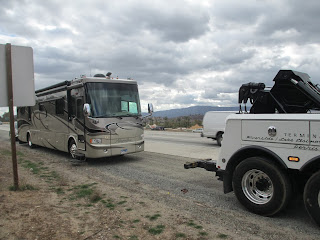 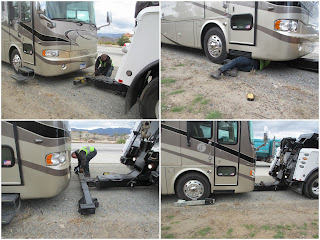 He had to put together some heavy pieces to go around the tires.  Then he operated the hydraulic lift with a hand held device.  He had to do a whole lot of things before we were all ready to go. 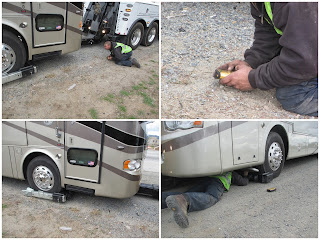 He was quick but in no rush and very methodical.  And careful.  Which we appreciated.  One thing he did that he said many do not do, it dis-engage the drive shaft.  Anything over 10 miles of towing, he said the drive shaft should be disconnected.  Then he hooked up an long air hose and tapped into our air system brake line back near the rear axle.

After about an hour, we were ready and on our way. 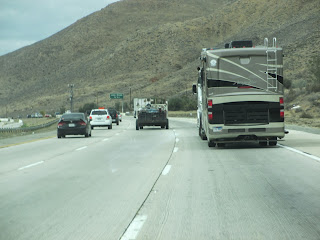 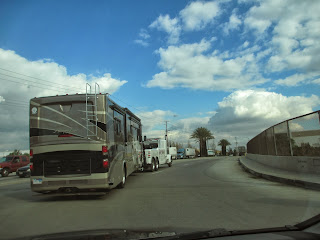 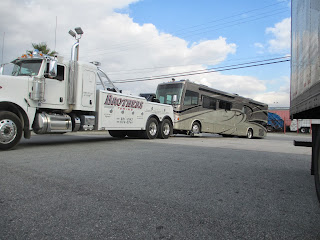 When we got to the repair facility, he really took his time into the driveway and over some speed bumps.  He was able to raise and lower the back end a few inches to make sure there was no touching or dragging.

After checking in we were pulled into our parking spot. 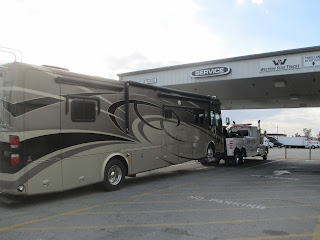 The driver disconnected everything and reattached the towbar and put the mudflap back down.  But his air hose adapter connection broke off underneath the coach.  I wasn't entirely sure what he was talking about so I crawled under the coach and he showed me. 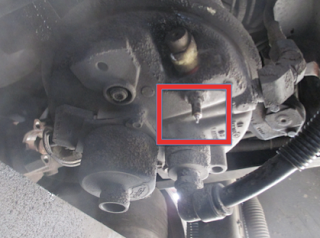 He did not have a replacement but thought the Freightliner parts department would certainly have the $2 part.  Hmm.  Not much we could do about that at the moment.

Next, we said adios and he went on his way.  The Service writer said someone would be out within two hours to give us a Quick Check.  This was Friday afternoon and he was thinking we probably would need to get in to service sometime Monday or Tuesday....

We were glad to see a mechanic come out after a little more than an hour.  He plugged into a connection in the back and got some readings. 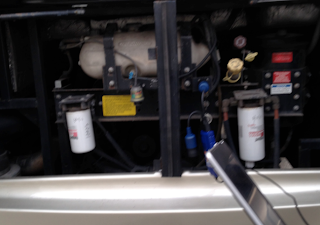 Yep - looks like the computer and it will have to go into the shop for further diagnostics and trouble shooting.

So that is our fate at the moment -- we will see what happens on Monday.

I did go into the parts store and a sales rep was able to find the part for the air hose connection that I needed.  But they were out of stock and don't expect on in until Jan 14.  Whoops -- that won't work. At this point I am thinking we will wait for the mechanics to take a look and have them run one down.  The "$2" item in the store is surely going to be more costly but for now, we have no idea what this is going to cost us.  But my guess is ---$$$$ we will see.

Fontana, CA is only a few miles from Redlands and our friends Bob and Sue.  The same ones we saw about six weeks ago.  They are good friends.  As in, "we are broke down and need a place to stay friends".
They have been great and we are staying with them for a few days.

Over the weekend we have been going over to the Freightliner place to start up the generator in the morning and evening.  We need to keep the batteries charged up so there aren't any issues with the refrigerator.

So our last couple of days have been exciting.  We are very thankful to have had this happen when and where it did.  And we fully expect to be on our way down to Seal Beach in the next few days.  We're looking forward to getting into the shop tomorrow hopefully and see what's going on.

Thanks for joining us today on the Roadrunner Chronicles!  Until next time... keep warm!


Posted by Roadrunner Chronicles at 9:27 AM