Roadrunner to Ontario and Miller Lake

We loaded up and got underway about 9:15. Half-way to Port Huron and the bridge to Canada, we stopped to fill up the Roadrunner. $199.92 lighter but with a full 150 gallon tank, we made our way to the bridge and took our turn in line.

Adam had a 9:00 interview in Port Huron and then was going to check out a couple of apartment possibilities in town. As it turned, out he was in line about the same time we went through.

We angled over to a line that had some RVs ahead of us and it took about 4 minutes to pass through. 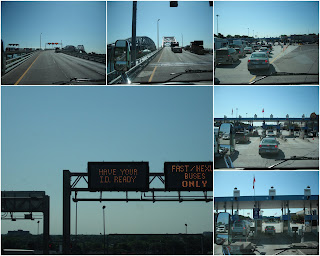 The border guard asked where we were from, what our license plate number was (?what who knows that?) and where we were going today. (Miller Lake near Tobermory). She asked how long we were staying (about 2 weeks) and if we were going anywhere else (Lake Talon near Rutherglen/North Bay). Finally she asked if we were carrying any firearms, tobacco or alcohol. (No to all.) That was it and happily quite anti-climatic.

10 yards past the booths, we pulled over for a few minutes and Pam and Adam switched places. Pam ended up following us in the Pathfinder so Adam could check out what it is like to travel in the Roadrunner and take over chief navigator duties.I am getting more used to driving on 2 lane hiways. It is a great way to see the country. It can be a little nerve wracking at times but it is really great to see what the country is like by passing through towns with 10-12,000 population.

Like central Illinois and some places in Michigan, Ontario has a number of windmill farms. I hope it is cost effective (I'm very sceptical) although I think it messes up the countryside. I wonder if the oil tycoons in Texas and Oklahoma had to contend with 'visual pollution'? 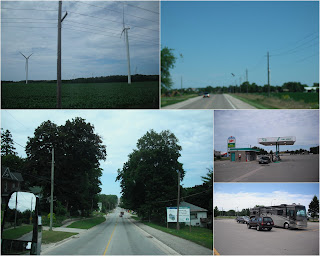 We stopped in Goderich for gasoline for the Pathfinder and a large enough area for the Roadrunner to get into and out of easily. Pam pulled over alongside afterwards and we stretched for a few minutes before we continued on to Miller Lake. 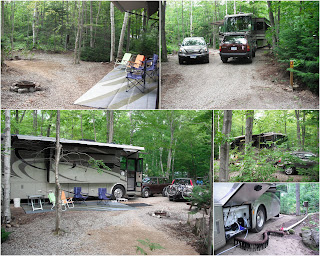 The place was sold out since this is Canda's Civic Holiday. However, they had cleared a seasonal site and we were able to get the reservation and shoehorn ourselves into it. Very nice campground and site.