We left for Springfield IL about 8:00 Friday morning. Our fellow NOMAD Judy joined us. We arrived about 10:00 and went to the Lincoln Visitor Center in downtown Springfield. We took a tour of the Lincoln Home National Historic Site where Abe Lincoln and Mary Todd lived in for 30 years.

From there we saw other homes that had been reconditioned and then saw various craftsmen: a blacksmith, leather worker, carvers, fiber artist (weaver, knitting, quilting, etc), broom maker, cooper (made barrels, butter churns and the like) and a gardener growing the same food they grew in the 1860s. 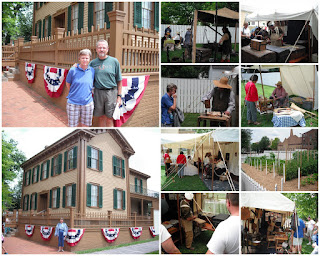 Next we went back to the visitor center and viewed the movie on his life and involvement in politics. Then we had lunch (sandwiches we packed) on a bench and drove over to the Lincoln Museum and Presidential Library. (A guide explained the Presidential Library was more of the Illinois Archives for research and we ended up not going to that building).

There was a restriction on many of the displays but they had: a rendition of Abe's log cabin; a display of Ford's Theater and the viewing box where Lincoln was assassinated; a timeline of the Civil War and the casualties on both sides week by week (700,000+ for the North, 600,000+ for the South); one of Abe's often worn top hats; a copy of the Emancipation Proclamation; and a whole lot more. A local high school singing group provided some music. 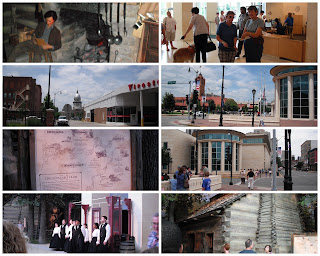 After the Library, we found the Oak Ridge Cemetery where Lincoln is entombed. Three of his sons are also there--the fourth (Robert) was in the Army and is buried in Arlington National Cemetery. I think the humble man Abe Lincoln would be mortified to see the audacious nature of the cemetery and memorial. It just struck me as a shrine that he would have not wanted. 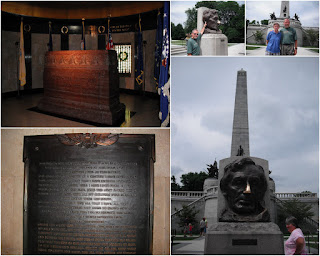 We got back to the campground in time for a quick dinner before we headed downtown Pontiac for the Independence Day 4th of July Concert. Folks brought their lawn chairs and gathered around the south side of the Courthouse steps. There were about 400 their to hear the Pontiac Municipal Band play an assortment of patriotic songs. It was great. 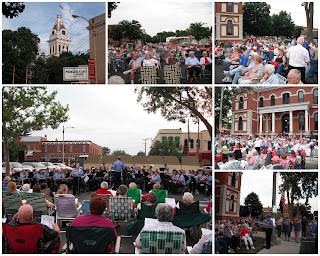 A highlight for me was right at the beginning when the local chapters of the American Legion and Veteran's of Foreign Wars posted the colors. The 10 men in the honor guard all had to be over 75 years old. It was touching -- because of these and others, freedom rings!
I was at attention and forgot to get a picture.