It was a travel day but we were not going too far so we were not in any rush to get started. I took some time surveying the beach and taking in the sights one more time. Since this is a USMC base, we saw a lot of Marines. There were some on the beach training. 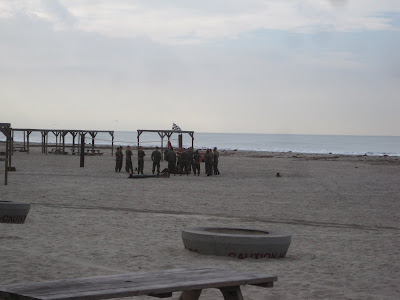 Our job at hand was to finish packing up. I dumped the tanks while Adam and Meghan folded up mats 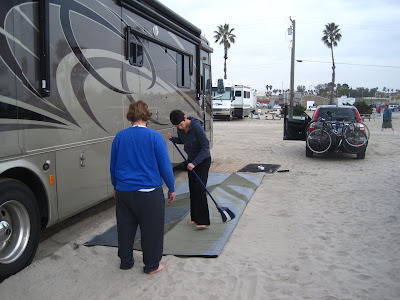 and helped me load up the Honda with the bikes and some excess firewood. We may use the firewood at Quartzsite in a couple of weeks.

We had about 80 miles to go and departed about 10:30. I checked my Pressure Pro Tire Monitoring System and my left front tire was low for some reason. I pulled over on base and got out the air compressor and filled up both front tires to about 105 psi. The other tires checked out fine.
While I was at it I cleaned the windshield and mirrors. They were pretty dirty after being on the beach for the last 10 days. Small inconvenience considering... :)

Once underway we made good time. Driving through busy traffic in Sun City and Riverside was not my favorite thing but I just went slowly (about 55 mph). 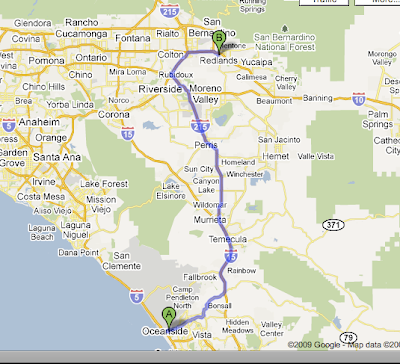 We tried something we haven't done before--we showed up at Mission RV park a day early. Uh oh... 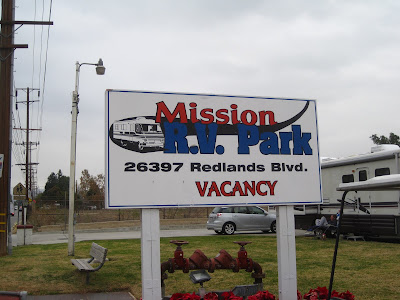 But Joe in the office suggested we stay the overnight in overflow parking and move into our reserved spot after it is vacated. That was helpful. Overflow is $22/night while regular spaces are $38/night. Extra guests are $5/night.


Then, the owner Mike came out and helped me sandwich the Roadrunner into place. 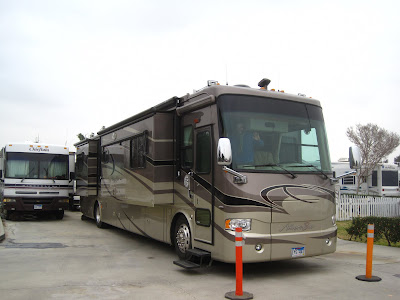 Not exactly scenic-- but we can work with it for a night.
After we got situated we went over to Bob and Soo's house. 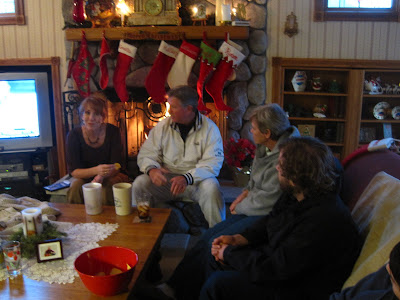 They moved there 20 years ago and built a new house. Bob did most of the interior since he is such a handy woodworker. In fact, we don't know anyone who does more in the wood shop than Bob.
He showed us one of his projects - ornate handled reversible screwdrivers. He takes different colored wood, glues them up, cuts them another time and glues them again. 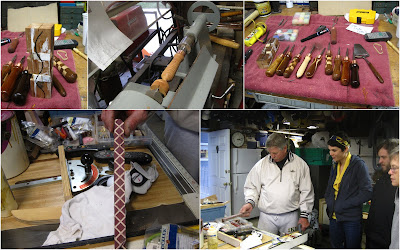 He then turns them on the lathe and puts some finished touches on his new creation. His garage is his haven and he spends 75% of his time at home in the shop.
When we lived two doors down from them in the mid 1980's (1986-1988) and our kids (Adam and Kelly) and theirs (Camille, Katieanne and Hillary) would play together often.
Katieanne and husband Ryan live nearby. Hillary graduated in June from California Baptist University and is takes graduate course while she lives at home. 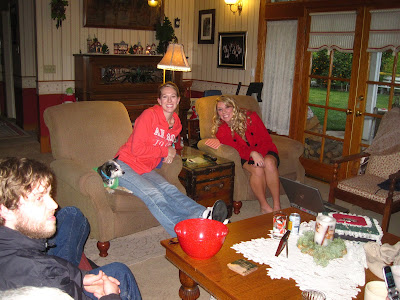 Sister Camille and husband Erik live in the neighborhood. We went out to dinner with Bob & Soo, Camille & Eric and their little guy William. Then Camille & Erik gave us a tour through Chapman Heights where some folks still have extravagant Christmas lights up. The lights were synchronized with a local radio station and they flashed on/off according to the songs that were being played.
Have you ever seen something like that before? This was a first for us and it was amazing!
We then went over to their place for some tea and conversation before they brought us back to the coach. Adam and Meghan had left before dinner to go to Whittier to see cousins Nate/Angela and Ben/Leslie.
We watched a little TV and went to bed.
As the year comes to a close, we want to wish you and yours a Happy New Year!
Thanks once again for viewing the Roadrunner Chronicles!
Posted by Roadrunner Chronicles at 10:05 AM