Things started early at Camp Red Bay. About 6:40 AM rigs started moving from their campsites into position in front of designated Service Bays. 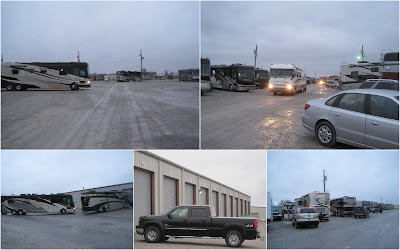 We were a day early for our appointment, so we went to the Tiffin Factory tour. We were here for a factory tour in September 2008 as wannabes. This time as full-timers things made a lot more sense.

Floyd 'Red' Davis gave the tour. He is a local friend of the Tiffin family and a pretty amazing guy at 83 years old. We met in the Visitor's Lounge and watched a video of the Tiffin's history. There were seven of us in the tour. 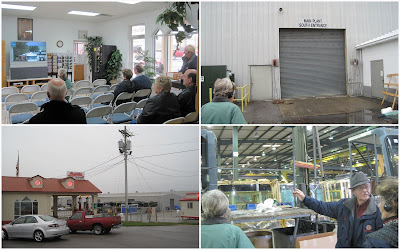 Tiffin is currrently making 8 units per day. Last September they had 4 motorhomes per day rolling through the lines. 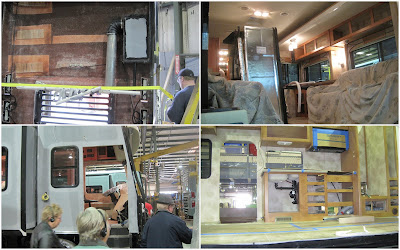 There are so many 'units' that go into the RV. The front and rear fiberglass 'caps' are moved from one warehouse to another. Wiring harnesses are made in another shop and brought over to the assembly plant. We saw section of the kitchen and plumbing and whole walls moved into place onto an RV. 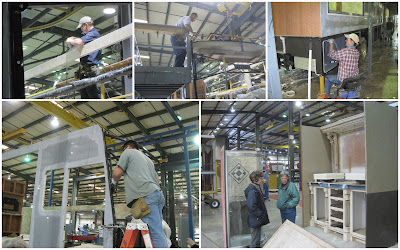 It is just fascinating!

In one assembly line, we saw a technician installing a See-Level monitoring system onto the side of the dump tanks. He was working on a clear water, a grey and a black tank that was going to be put into one of the coaches. 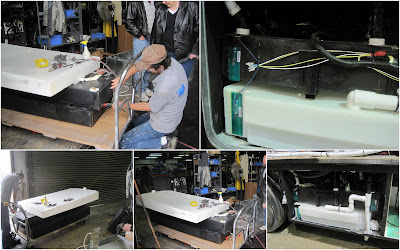 It is surprising how 'up close' and personal we are allowed to be. We had free access to roam around within 20-30 feet of the group and see what we wanted to see.

A couple of guys were installing slide-outs. The slide outs were sitting on a stationary platform near the coach, then they moved it on to a mobile lift. 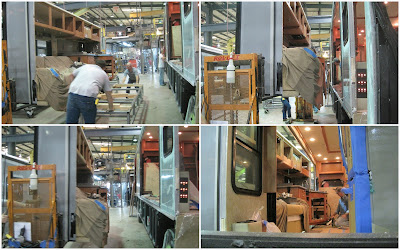 It was very interesting to see them putting the RV's together. Everyone was working with purpose and moving things along very steadily. Not fast-- but quickly.

We could have stayed another couple of hours but I got a phone call from the Service Department. They could take us early! We were to be at Service Bay #10 by 12:00 noon so we had to cut short the factory tour.

Tiffin believes in letting customers have open access. As in the painting facility, and in the assembly plant, were were allowed to walk around the Service Repair facility.

We talked with Leesha and got a picture. She is in the parts department. 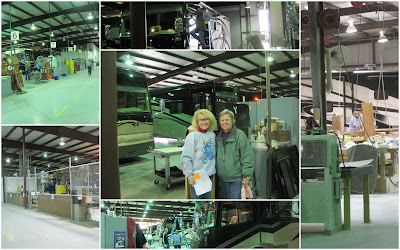 We were assigned Service Bay #10. Chad and Corey started working right through it. Chad worked on two awning corners that need to be tighted down. 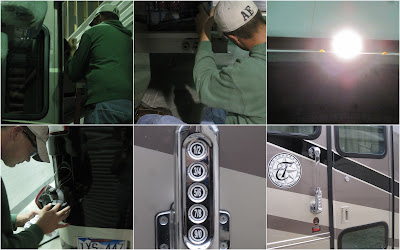 He also repaired the rear right tail light that had water in it. After a couple of tries, he adjusted the basement sliding tray locking mechanism. Chad removed a panel in the basement and replaced a couple of fuses for the keyless door entry system. That also fixed the locks so we can hit a button to lock all the basement doors.

Chad and Corey finished up all they could do by 2:45 which was good timing since they quit at 3:00. We are scheduled next to be turned over to 'mechanical' and our last stop will be the 'body shop'.

We were very pleased at the progress. We look forward to maybe getting things finished up today? We will see.