I met Al when I started running in Fairfax with Gil.

Gil was an inspiration to me because he is 10+ years older than me and in great shape.  He encouraged me to come out with him and his buddies at Burke Lake a couple of years ago and 'he would get me into my high school running shape'.  That sounded good to me since I was a runner at one time but when I hit 'middle age', I had a number of injuries every time I tried to get back into shape.

I didn't know if it was my head, my heart or 'degenerative bone disease' (that I was once diagnosed with) that caused my joints to ache and my calf muscles to give out with a pull of some type long about the two week period of my 'comebacks'.  My goal for many years has been to get back to the point where I could run five miles daily.

I figured my running days were over until I met Gil.  Gil had me take it slow and basically get into a very easy stretching mode.  The main difference in my running approach was the he had me and run a few minutes, walk a few minutes, run a few minutes.  I also bought some new running shoes and gave it a try.  I did not get to the point where I was running five miles a day but I ran many 'long runs' around Burke Lake which is 4.6 miles.

That is where I met Al.  Al is a runner and biker (road bike not motorcycle).  He is over six feet tall and lost over 100 pounds a couple of years ago by eating right and working out.  He regularly ran or biked with Gil.  A few times when Gil couldn't meet us, Al and I would bike.  We did that a couple of times on the Washington and Old Dominion (W&OD) bike trail in Reston to Leesburg.

So I got to know Al in Fairfax before we started full-timing.  We both talked of the day when we would sell our homes and get on with our lives.  He was running the HR department for the Exxon office in Fairfax before he retired.  He retired in July, sold his condo and moved to Mississippi to be with his aging parents.

A year ago, Pam and I were motoring through Mississippi on our way to Red Bay, AL and were not able to stop in Laurel, MS to see Al.  But a couple of weeks ago he contacted me and suggested we get together in Gulfport MS since he had an errand to run at the NIKE store there.

We met last Saturday and it was good to see him.  He continues to run regularly, while I have not kept it up since Thanksgiving.  Knee problems this time.  (Where is Gil when you need him??)  Al has adjusted well to retirement and taking care of his mom.  His 95 year old dad passed away at Thanksgiving.

Al's future plans included moving to Ecuador to live in an adobe house he had built a couple of years ago.  For now, he is near family and enjoying life.

We met for lunch at the Nike store and then went into Gulfport where we had lunch at Port City Cafe. 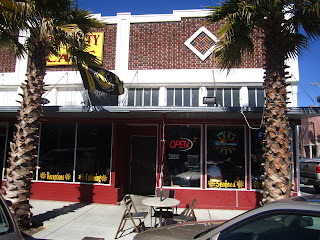 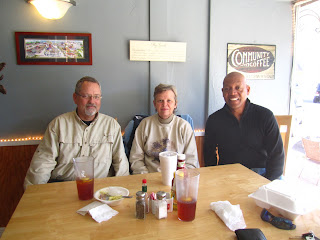 I had chicken gumbo, Pam had red beans and rice, and Al had gumbo and a catfish dish.  It was great to catch up and see him!  That is one thing we love about this life style:  seeing friends.

That is one of our highlights on Saturday in nearby Gulfport.  We got home later in the afternoon and Pam battled the onslaught of a nasty cold that is going around our NOMAD group.  She is presently down for the count but vows to get over it in seven days or a week, depending on if she goes to the doctor or not.