After we did the wash and had lunch on Friday, we made the 20 mile drive over to Biloxi to see
Jefferson Davis House.  The home is right on Beach Boulevard, 50 yards from the water, which took a lot of Katrina damage in 2005. 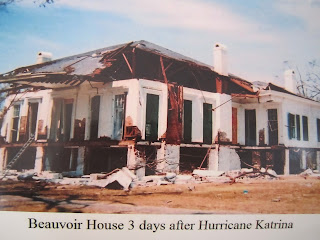 It was a surprise it didn't have more damage.  Our guide said the floor level of the home stands at 23 feet above sea level (and known as a raised cottage standing on pillars) while the water crested at 24 feet during the storm.  Quite a bit of the contents and furniture in the home survived.

The Beavoir (French for Beautiful View) house was originally constructed in 1848-1852 by wealthy businessman James Brown who built it as a summer home.  In 1873 Sarah Dorsey bought it an lived there with her brother.  Jefferson Davis had been to Biloxi and liked the area and was invited to stay on the grounds to write his memoirs.  Davis arranged to buy the property in 1879.  Dorsey died after Davis made the first of three payments toward the $5500 purchase price.  Dorsey left Davis the property in her will.

Jefferson Davis, wife Varina and their daughter Winnie moved into the house and stayed their until his death in 1889.  Varina and her daughter moved to New York in 1891.  Beavoir became the property of the Mississippi Division of the Sons of Confederate Veterans when Varina died in 1898.  From 1903 until 1957 over 2500 veterans and their families lived on the grounds where dozens of buildings housed them.

Public tours of the main home began in 1941 and the Jefferson Davis Presidential Library was constructed in 1998.  It damaged in Katrina so badly it was torn down and is being rebuilt.

We bought our tickets in the gift shop and walked along the path past a statute and historical marker before we made it to the front porch. 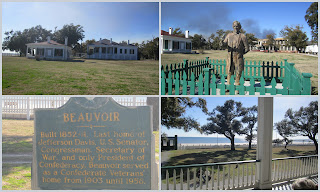 Katrina left the beaches filled with debris and trash that has all been cleaned up and restored so the view off the front porch is a beautiful. 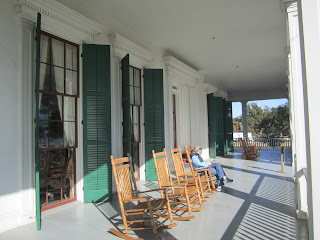 Our guide opened the front door at 1:30 PM and nine of us entered the main room of the home for the tour.  Beauvoir reminded me of the Robert E. Lee home on the grounds of Arlington cemetery.  Though the Lee home was a considerable bigger and two stories, it had the same basic layout as this home.

Beavoir has very tall ceilings and the main portion of the house is the largest room going from the front to the back porch.  It is a very wide hallway/room about 20 feet across. 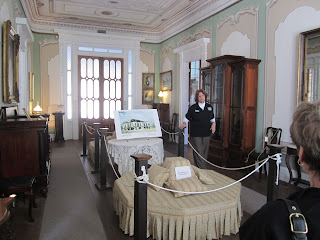 This was the primary room where guests were entertained and social events were held.  For additional room to entertain, furniture could be moved around or placed on the large porch outside during the summer if the weather permitted. 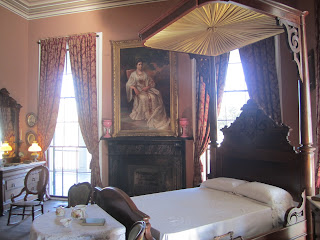 Their daughter Winnie was 17 when the moved in.  This was her bedroom, immediately off to the right as you enter the home. 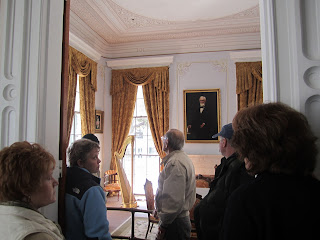 Opposite Winnie's bedroom on the left was the Reception room.  Notice the large painting of Jefferson Davis on the wall and the beautiful harp.

Adjacent to the reception room was the library where Jefferson Davis did a lot of reading and writing. 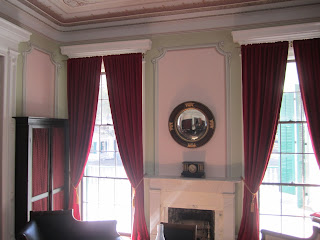 He had bookcases made that were modeled after those in the Library of Congress.

In the back were his and Varina's bedrooms. 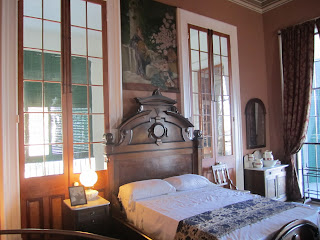 Davis and his wife had separate, adjoining bedrooms ~ as was the custom of the day. 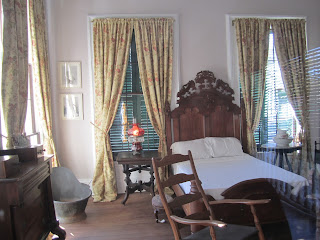 Out the back door you could see where an orange grove once stood.  This was also the area where the many buildings once stood as part of the the Soldier's Retirement home. 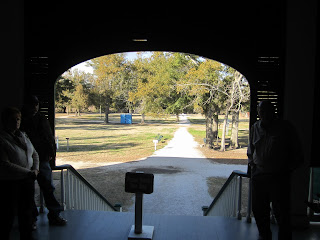 Off to the side house on the right about 100 yards away, you could see the construction progressing for the Jefferson Davis Presidential Library and Museum. 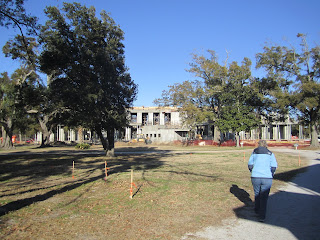 The tickets were well worth the $7.50 ($9 without an AARP or Military card).  I learned a lot and now am interested in learning more about the confederacy.  'The Rise and Fall of the Confederate Government' by Jefferson Davis seems like a good place to start.