A Little Bit of Family History

A while back Pam's daddy said the next time we were in town, he wanted to show us where he was born and the area up in the mountains where he grew up.

Yesterday, we got the chance to take him up on his offer. First we had a photo op with Pam and Kelly. Shirley (her dad) has a nice place in Clinton TN where he still does some woodworking. A few of his orders (cedar and oak swing benches) were drying. 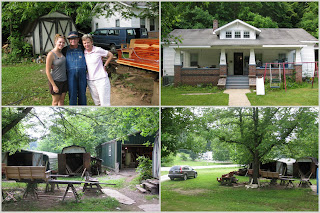 Shirley was from the hill country about an hour north of Knoxville TN in Anderson County. A lot of coal mining was done back in the 1930's and 10940's. The roads were a little tricky. Especially when we had to pass a coal truck. 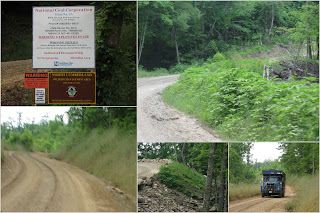 A highlight of the trip was visiting the cemetery where Shirley's dad was buried. It was near Moore's Camp up on a remote mountain side. There must have been a couple hundred graves there. After a few minutes we found Ezra Carr's grave (Shirley's dad). He died in a coal mine accident nearby in 1937. His mother's grave (Mollie Seiber) was nearby. 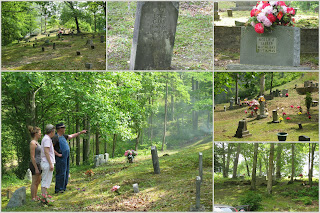 We drove through the area of Devonia, Indian Fork and Moore's Camp where Shirley was born and raised. He joined the Army in 1946 (age 20) and spent three years in Fort Lewis Washington before returning to Tennessee. He married and moved to Dutch Valley TN near Clinton.
Pam and Joan lived in the house shown below. Back then it did not have brickwork. Shirely owned over 100 acres of farm land, most of which he cleared. They had farm animals. Pam spent most of her time outside helping her dad on the farm while Joan did a lot of the cleaning and cooking. 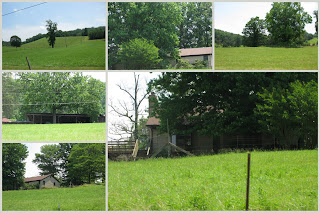 We packed sandwiches for lunch and had a great little trip. I took a lot of pictures and will save some for later. When returned Bonita was home (Shirley's wife) and we chatted a little bit about the day and enjoyed some Tennessee hospitality when we returned. 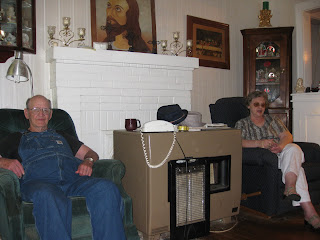 Our little day trip took us about 90 miles. 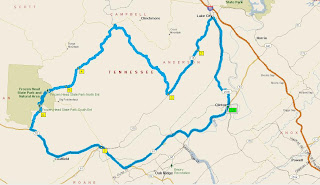 We took a quick group shot and said our goodbyes. 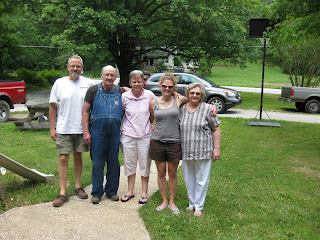 It was a very unique day for us and we all enjoyed it thoroughly.
Thanks for checking in on the Roadrunner Chronicles!

A a special thanks to you all that leave a comment and /or email us. We appreciate it greatly!
Posted by Roadrunner Chronicles at 7:43 AM