Last good byes and on to Maynardville

Friday night we had some more friends come by and we said good bye for a while to Adam and Meghan. This is the closest thing I came to a group shot. We hope to see them later in the summer in August when we will be in Canada for a few weeks. 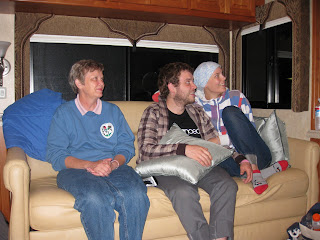 Kelly's friends Jason and Erin drove up from Richmond. David and Anh live nearby and we have become good friends over the years. It was nice of them to come over and we appreciated seeing them. 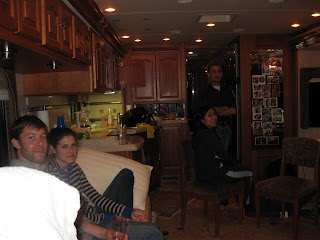 After 10 days at Lake Fairfax Campground it was time to go. We took some photos of the Allegro Bus and our time at the dump station. So far the dump station chores have gone well but I have heard that is not always the case so I am trying to be careful...
The trip to Tennessee was the first time we were able to hook up the Blue Ox tow system with the Honda and it worked like a champ! 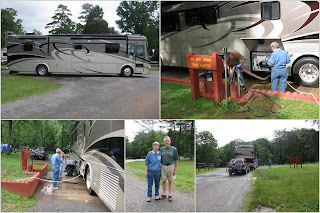 It was a 450 mile trip and Pam took her first drive in the Roadrunner. She drove a couple of hours and did great. In fact, I took a brief siesta on the couch while she motored down the road. She was feeling pretty comfortable behind the wheel and passed some slower moving rigs on the road with no problem. Kelly enjoyed the trip and acclimated well. Ed (Kelly's dog) has done well too after some initial jitters with the movement of the RV.

It was the first time for me to fill up at the truck stop and I felt like a complete rookie. It took a while to figure out how they do things and to clean the windshield but I got that done and we headed on the Maynardville. 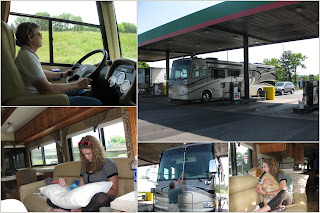 The Roadrunner is a dream to drive. It rides easy and has a great view out of the front seats. Pam took a couple of shots while in the passenger seat of the beautiful Tennessee countryside. 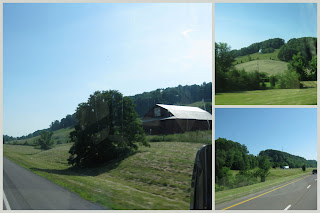 We arrive Saturday evening and went to Temple Baptist Church in Fountain City on Sunday morning with Joan and Mike. Later that afternoon, Pam's dad and wife stopped by to see us. We had a chance to show them the RV and have some good conversation in the backyard. It was a very nice day. 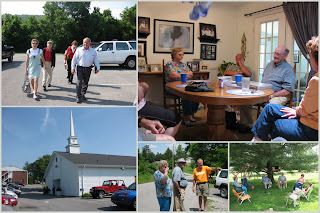 We are going to be seeing where Pam's dad lived and grew up in eastern Tennessee and are looking forward to the tour.