This is a story of a 'work in progress'.  We had new interior lights installed behind the trim near the ceiling on the front slide outs.  They worked fine for two days but now the string on the Driver Side (DS) doesn't work.  Ugh oh...

This was a bit of a struggle from the beginning and eventually we will learn enough about wiring it all together.  But this is one of those projects that didn't quite go as expected.

Here's how it all went down.

We contacted a guy who knew a guy that could install interior rope lights.  That's how we have found after duty work projects guys in the past.  Someone knows someone.  In Red Bay it is very common.

Our guy is a pretty busy and hard working fellow. He finished up another job and came over and we finally got started on the install about 7:25 PM Thursday night.

He used the air system from the Roadrunner for his brad gun. 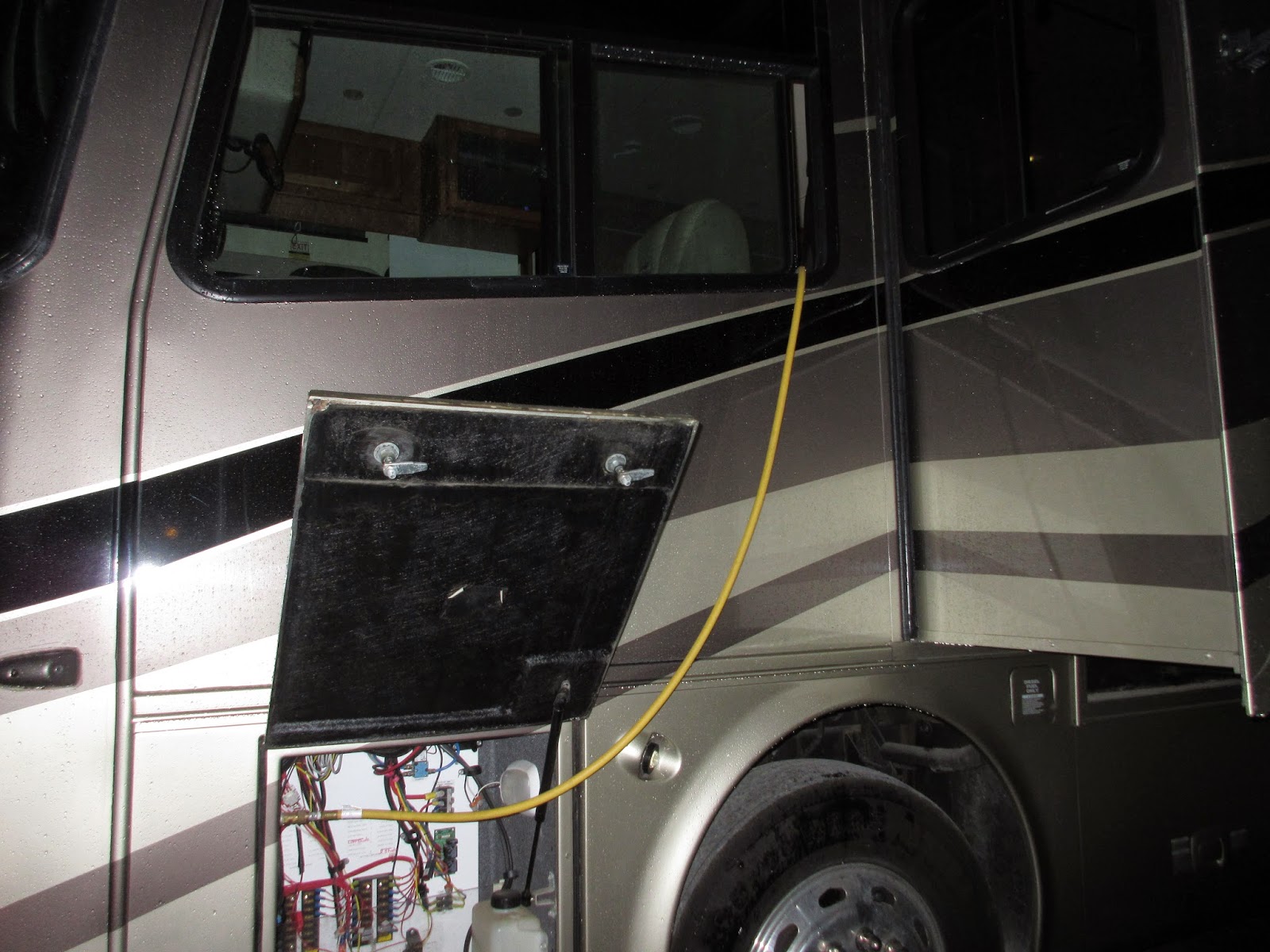 Then he carefully pried off the bottom molding piece of the DS slideout, beginning in the rear.  That exposed the metal screws holding the larger molding which was secured into the metal slideout frame. 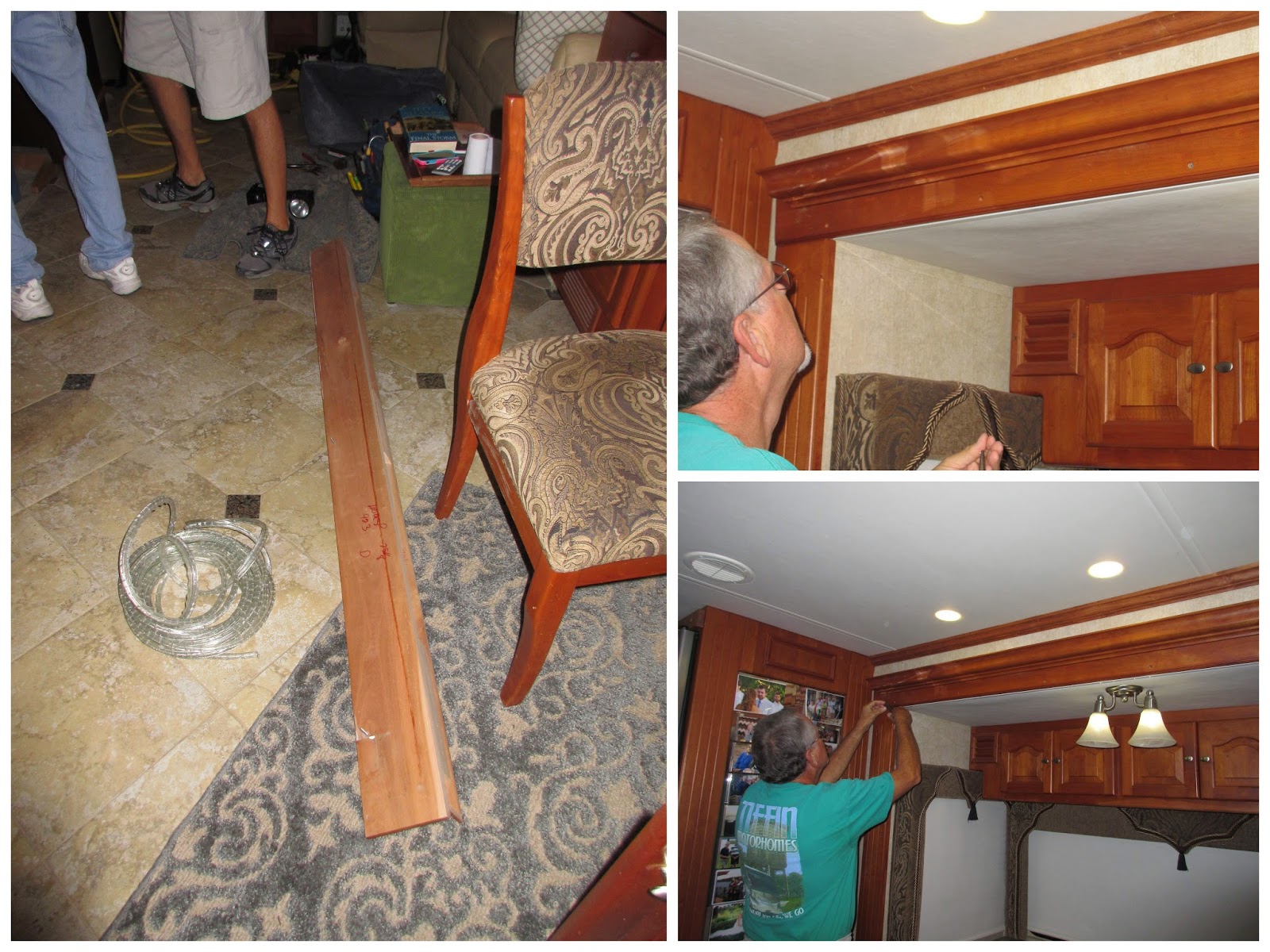 My job was to go back with a pair of needle nose pliers and remove the fine brad 'nail's' that were holding the bottom piece.

Next we removed the middle and front pieces, then laid them face side down on the floor.  We then carefully measured the rope lights to precisely the length we wanted.  There are faint scissor marks on the rope light to show you were to cut. 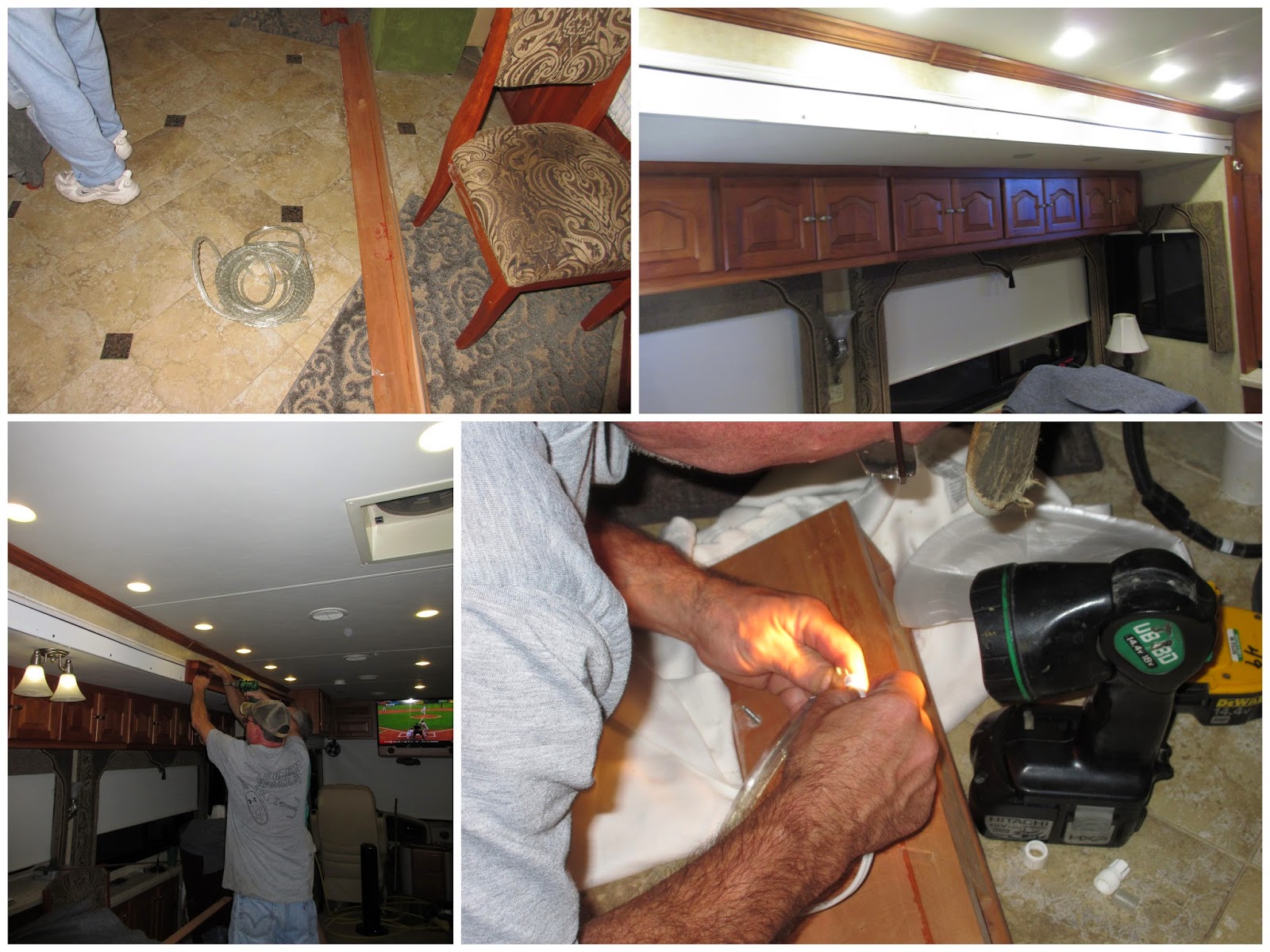 We then stripped the end section exposing the wires and touched them to a 12v battery to make sure the lights were all working. 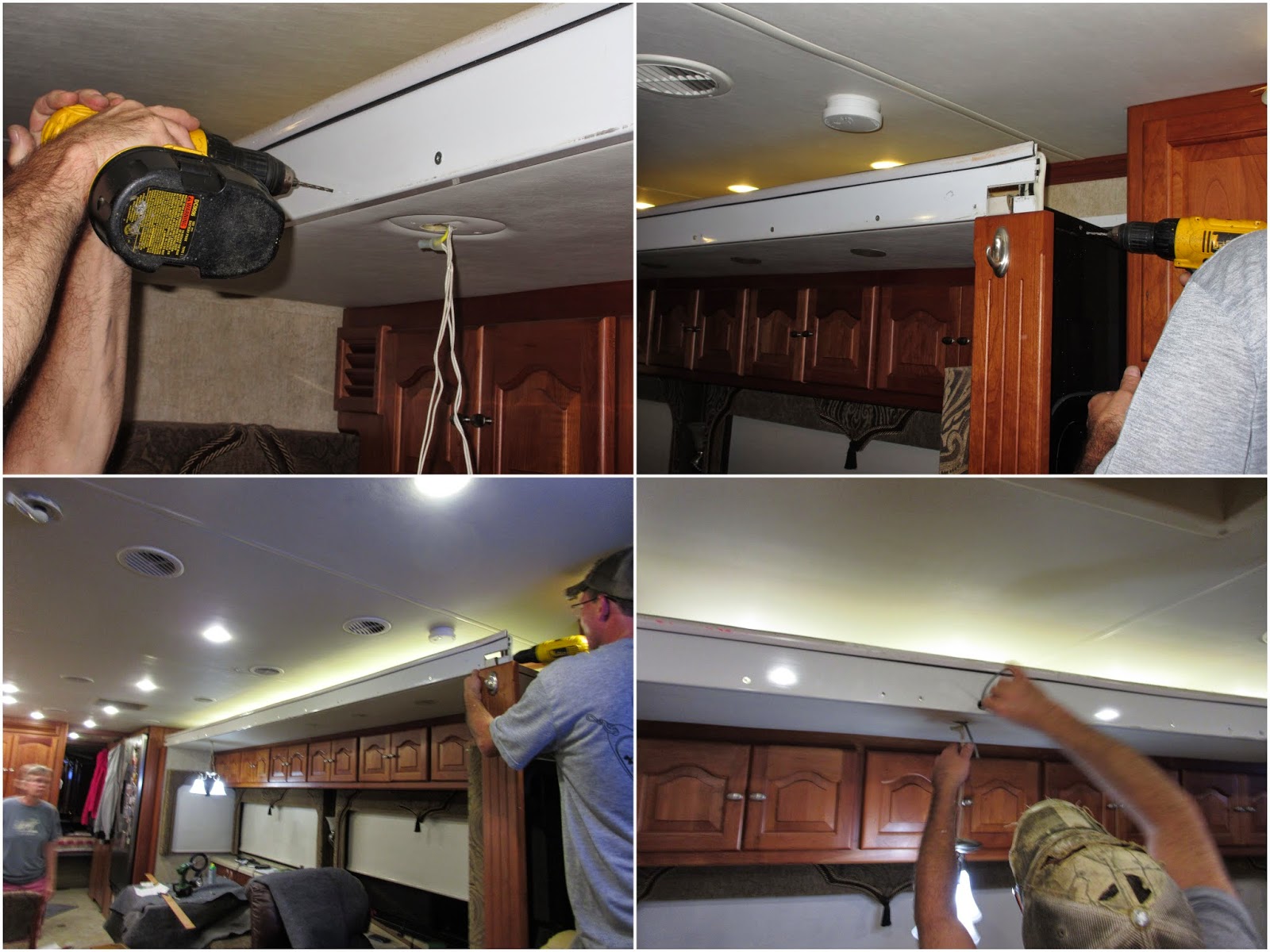 The speaker wire then was fed through the front end of the metal hollow tubing/frame down to the light over the table.  After shoving it down through the channel, we fished it through the extra hole we drilled, then down through with the other wires to the existing light.

So far so good.  But this is the hardest part of the whole projects.  We have two lights and two switches on the wall.  We are going to add a third light and switch (rope lights) and have them all work together.  All on, all off, some on some off and every combination. 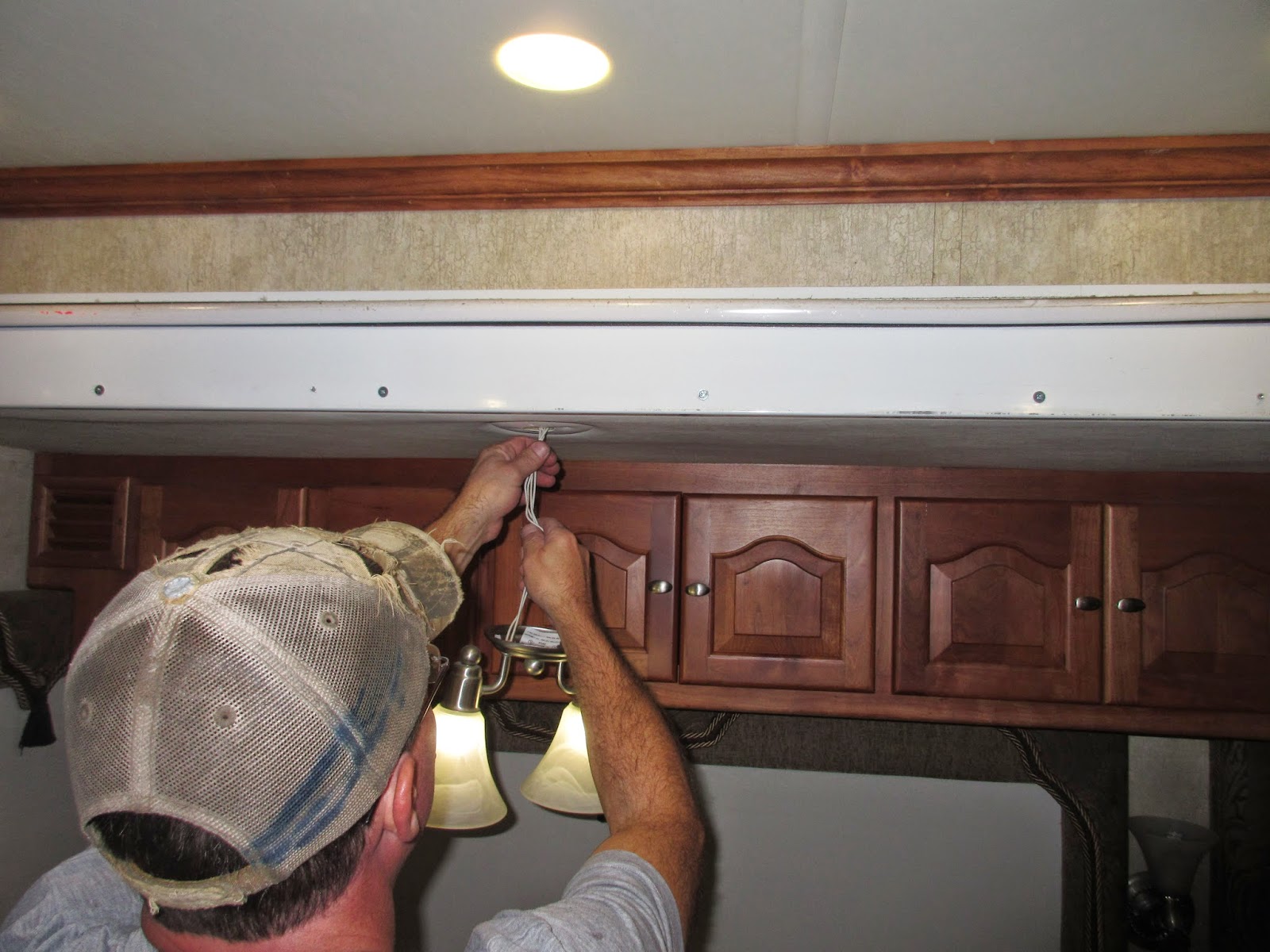 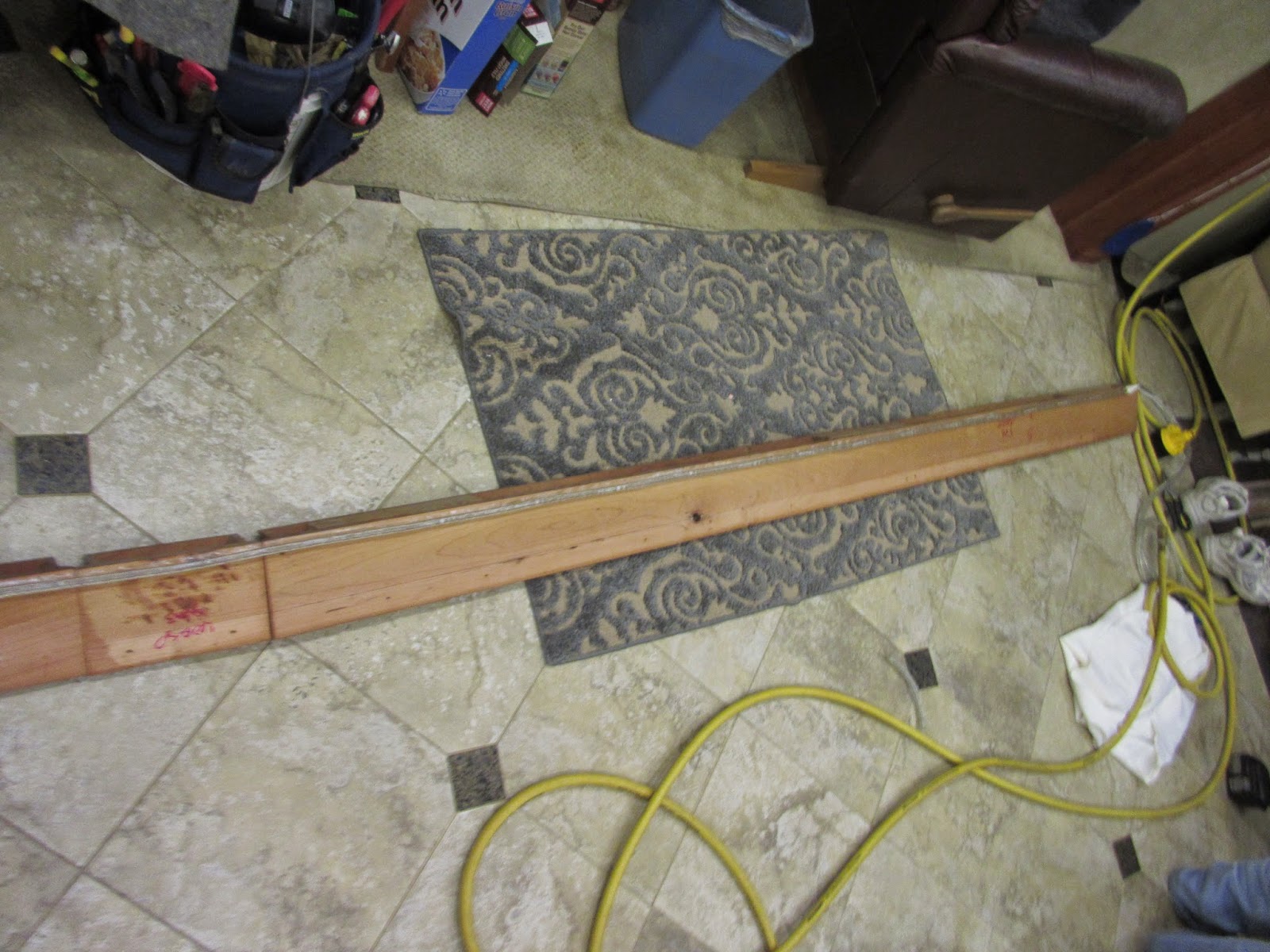 At the end of the rope lights he installed a pig-tail the connected to the battery to check the lights one more time. 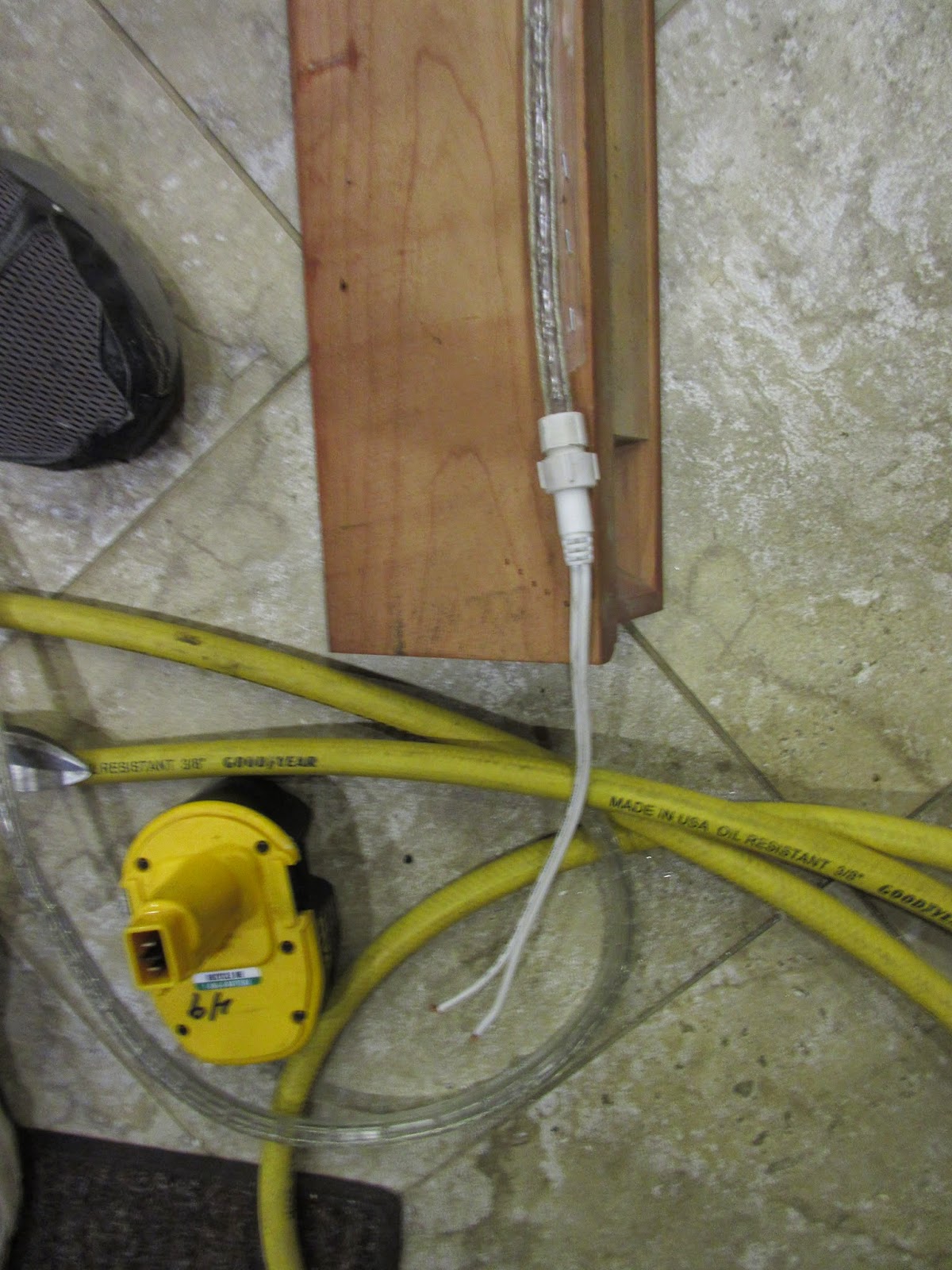 We turned our attention to the other side, took off the trim on the other side.  We installed a light switch near the end of the Passenger Side (PS) sofa.  The rope lights were mounted on the inside of the trim near the first overhead light. 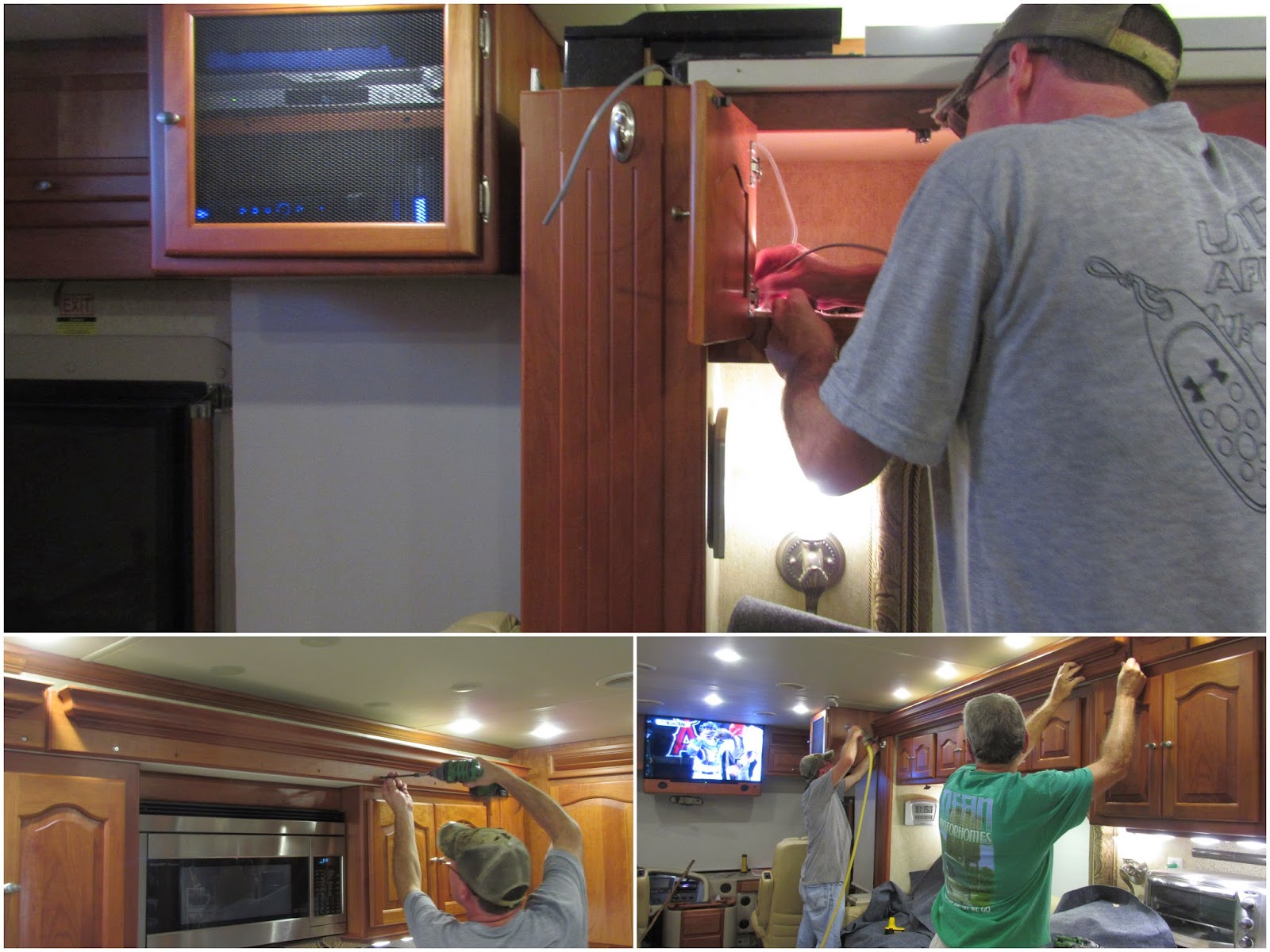 It was a much easier installation and we put the trim back together and called it a day. 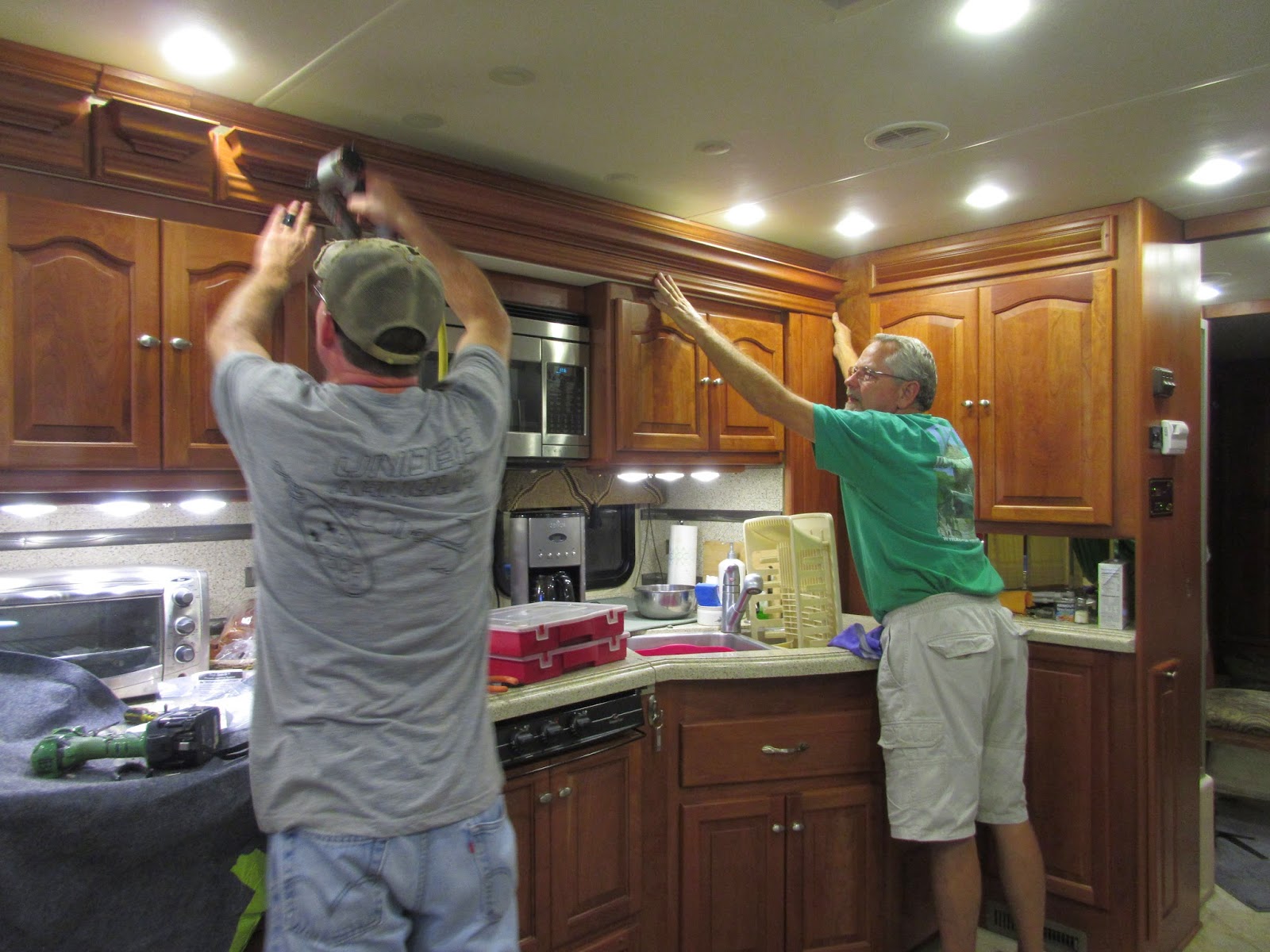 It was past 11:25 PM.  But we wanted the lights up and only had the wiring left on the DS. 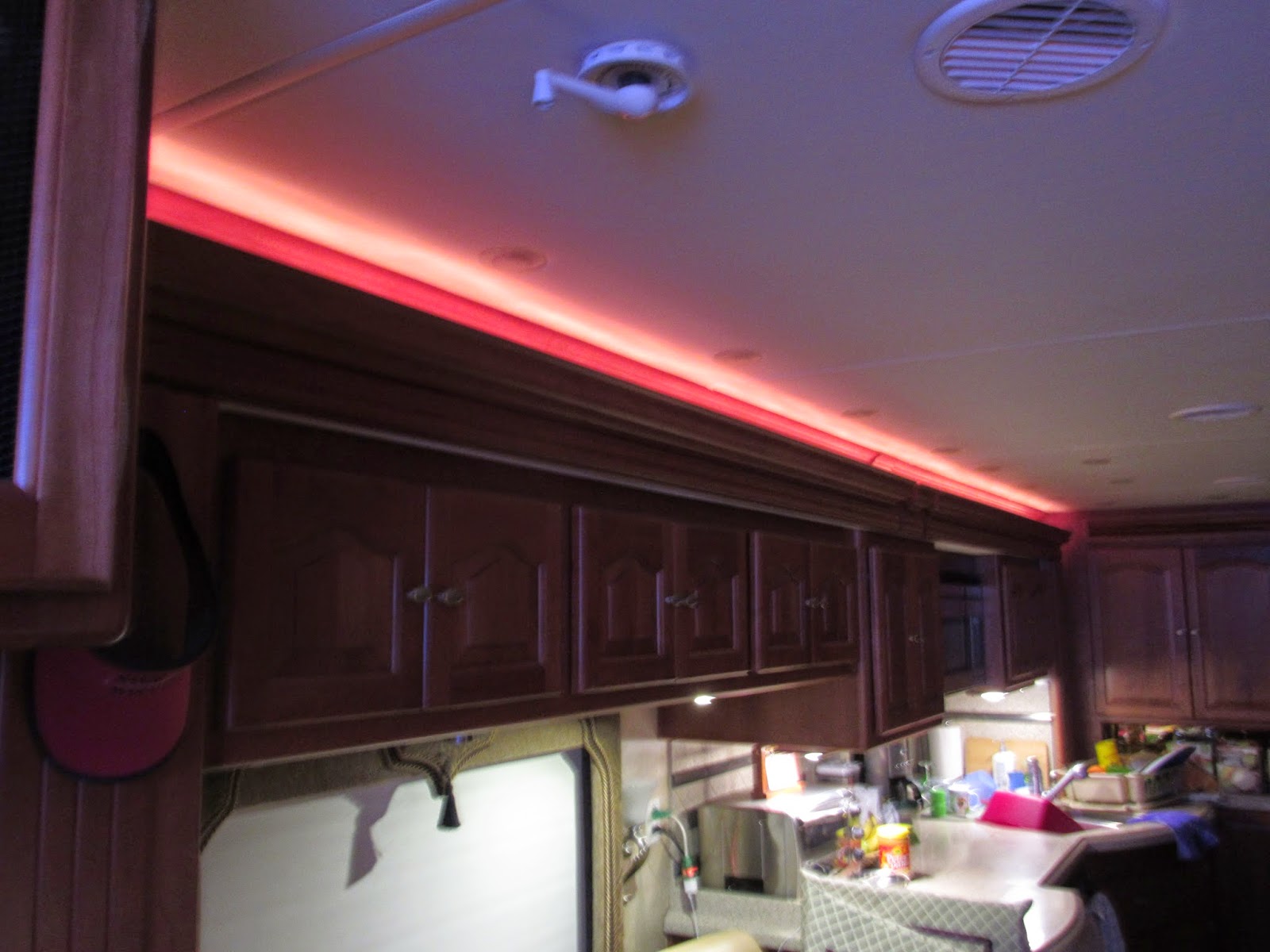 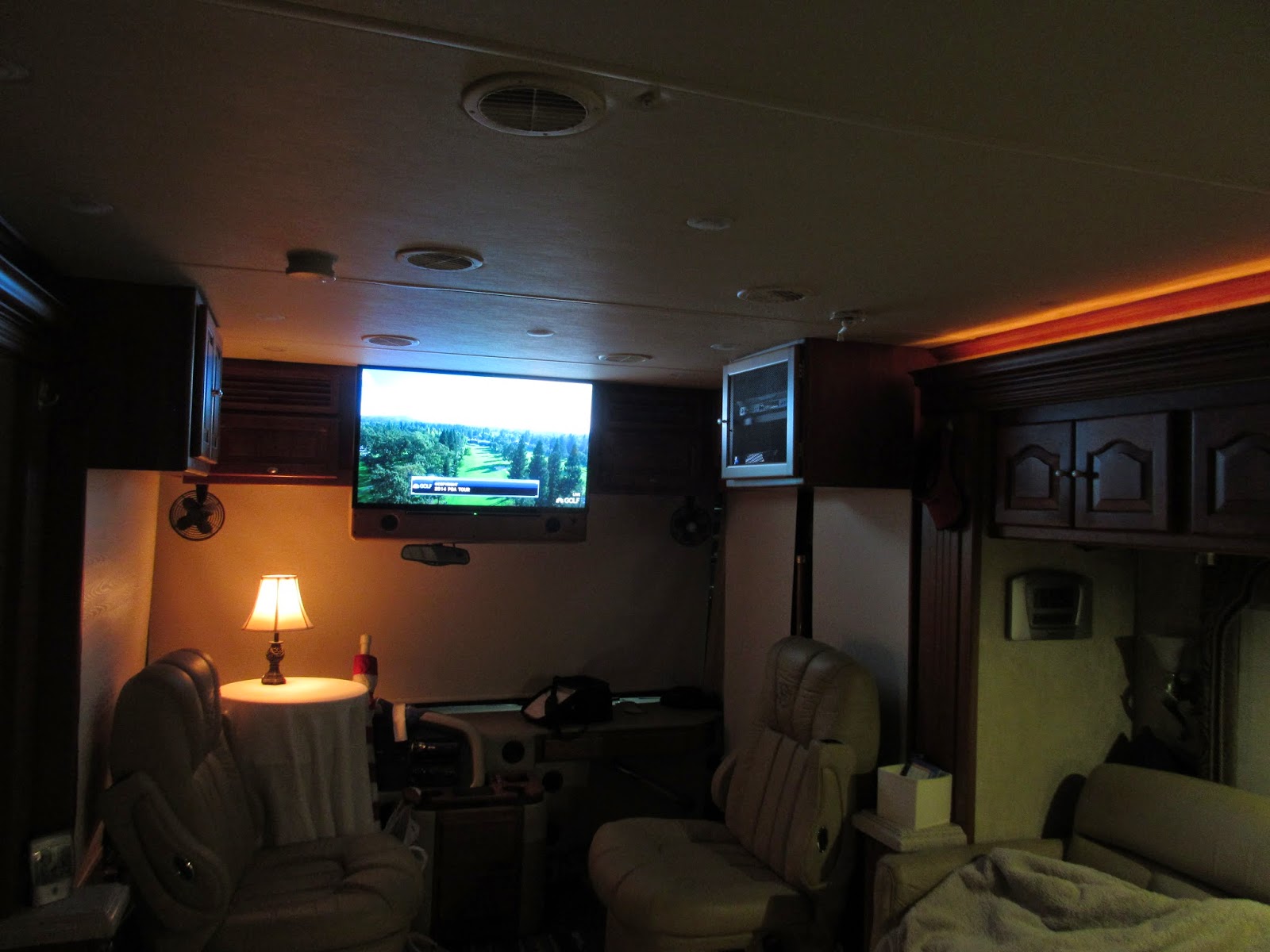 On Friday we got into the Service Center got all the repairs done on our list and went back to our campsite.  He came over after work and hooked up the lights on the DS.

I wish I had watched more closely on what he hooked up to what.  We checked it out and it all worked fine.  Three lights, three switches and every combination of on/off. 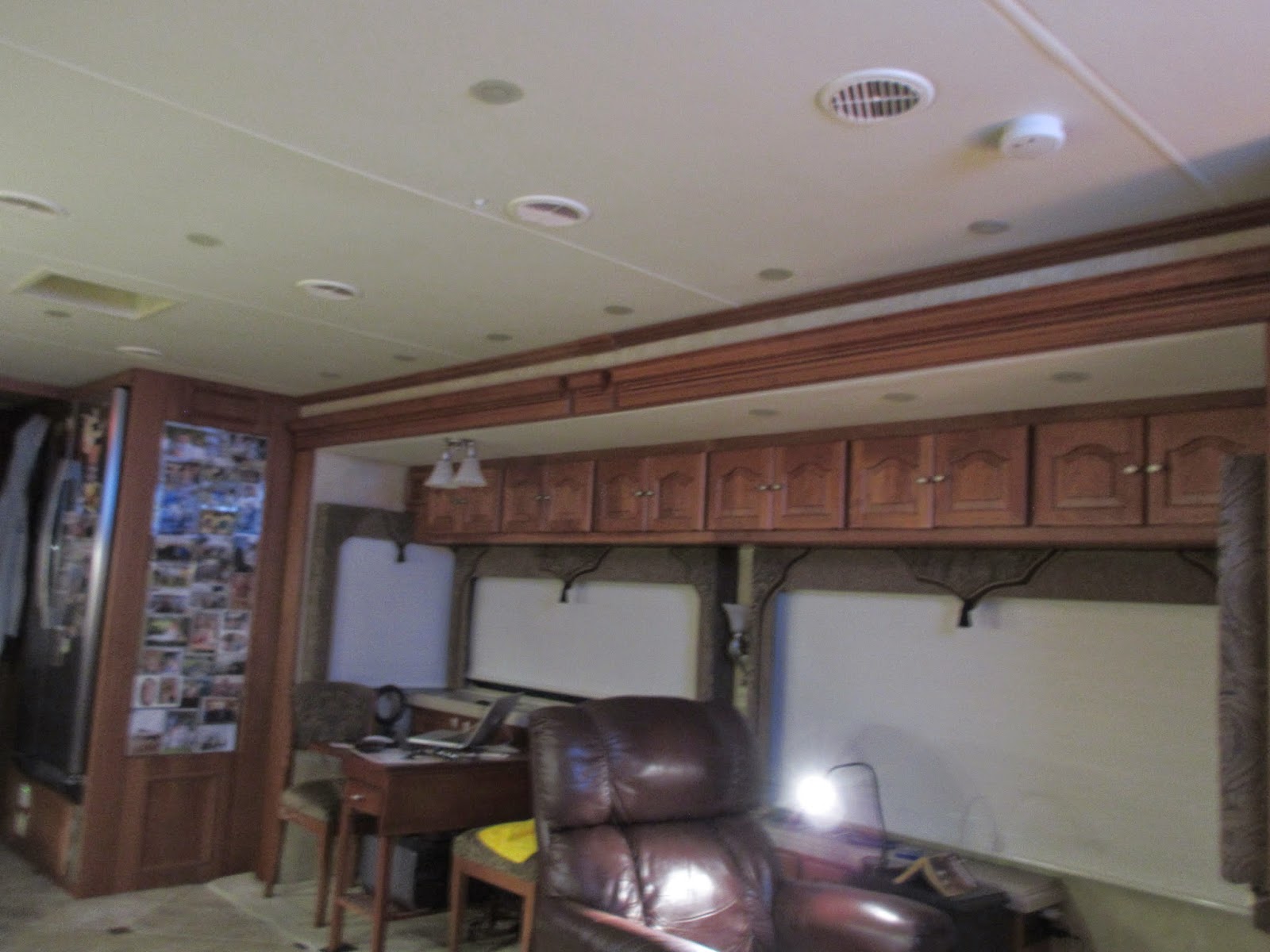 We are scratching our heads though after taking the light down over the table and looking at all the connections.  We took off each connector and rewire them all but clearly didn't get it right.  More to follow on this...

I share this in part to document the fact that not all our upgrades go smoothly.  Most do, this one did for one set of lights.  Then too, I believe we will eventually figure it out and be able to show you the new lights on both sides.

That's all for now and THANKS for joining us on the Roadrunner Chronicles!

Posted by Roadrunner Chronicles at 6:00 AM