I love those concise, well-done displays that tell the story of the area and a lot of history.  The other found one on the pier outside of the Monterey Aquarium in Monterey, CA. 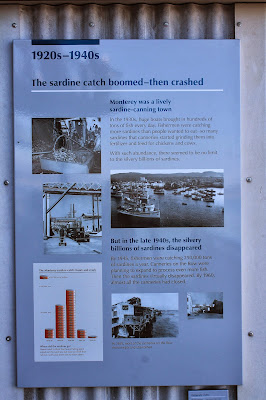 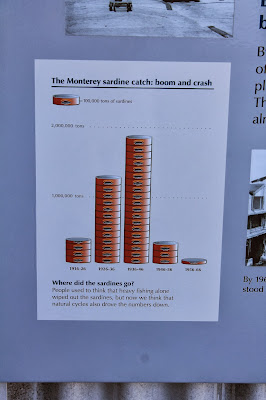 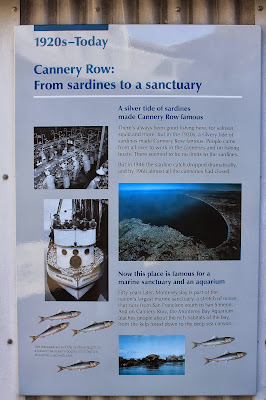 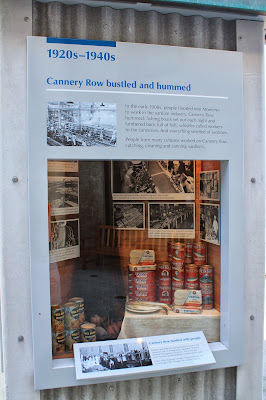 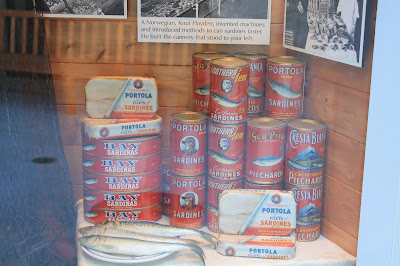 Hopefully you can click on the picture to enlarge it and read the finer details if you want to.

I find myself taking pictures of the sign and informational items so I don't forget a name or in this case, to go back and re-read the information.

I have been curious about Cannery Row since I first heard of it.  I didn't find out until later, after high school, that it was more than the title of John Steinbeck's novels.   But, what was it?  Is there such a thing as a cannery row apart from THE Cannery Row?  Apparently not.  This is the only reference to one I have heard of.

In fact, the area of Monterey known as Cannery Row was actually a stretch of Oceanview Avenue that had its name changed to "Cannery Row" in January 1958 to honor John Steinbeck and the notoriety he brought it.

Then the actual essence of Cannery Row in its peak time --it was all about the sardines.  Millions of pounds that were harvested and shipped out. I think I tried sardines once.  Might have been when I was still in my mid-twenties.  Afterwards, I remember thinking, "Why did I do that!? That was awful!"  Sometimes I mis-remember though and may have to try them again.  We'll see.  But I know they smell quite a bit.

Can you imagine being in Cannery Row during its Hey Day? The action activity of the tens upon tens  of boats (purse seiners) going out each day. And later, whistles going off to alert the factory workers, the catch is coming in -- get ready!  And then the hours upon hours sorting fish and packing and canning them.  All the routine, monotonous? work day after day for years.

And folks glad to have a job.  In spite of the nasty conditions.  And the smell.  For miles and miles.  Cannery Row then was probably not anything remotely like the tourist spot it is today.  It was probably gross and smelly and polluted industrial park-like area where hard working people were getting the job done…

So that's how I remember a bit of Cannery Row - in 5 pictures!