Roadrunner Reflections - Getting the Roadrunner Sold - Part 3 of 3

It was about a year ago that we were in final preparations to sell the Roadrunner.  We had numerous texts and emails with Mike and had things lined up to make the sale when he arrived in Jacksonville.
We were busy getting things ready for him. 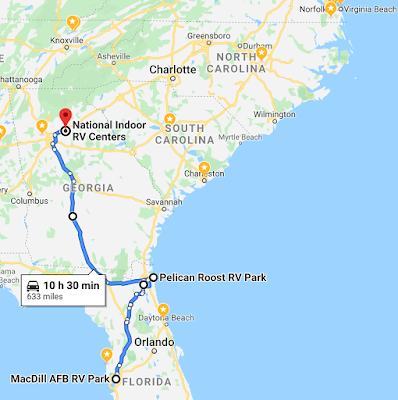 We had spent December in the Keys and then traveled north to MacDill AFB/Tampa to finish final cleanup and enjoy a few more days of the RV life.  We attended the large Tampa RV show and had a good time in the area.

We saw some friends in the area and we worked on the coach.  The last couple of days I decided to replace the gasket on the toilet because the toilet bowl was not holding water.  That is a good indicator the gasket is failing.

It always is little hard to do because we have to cut the wires, disconnect the water, remove the toilet, turn it upside down then put the gasket in reverse sequence, turn it back over, reconnect the wires and hook everything back up.  Its a 20 minute job if everything goes well.  Ha!

The water in the toilet was leaking out.  I got the gasket upside down.  Next, we disconnected everything, turned it over again, put the gasket in, tightened everything down and POP!
The ceramic toilet broke!  Yikes!

It was Friday and we were leaving Sunday for Jacksonville.  Now the pressure was really on!  We ended up replacing our ceramic electric toilet with a foot pedal model that worked great.  We didn’t know if it was going to work but it performed magnificently and we wished we’d have swapped it out
many years ago!

On to Jacksonville.  We spent a couple of days at the Jacksonville Navy RV campground and then parked the Roadrunner at Mayport Naval Station at Pelican Roost Campground.  Its one of the military’s best RV campgrounds (in my opinion.)

While there, we rented a small U-Haul Trailer, packed up almost everything remaining in the 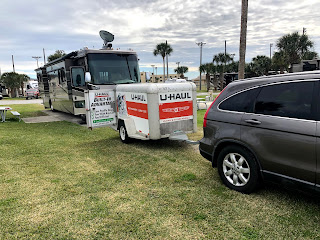 Roadrunner, and then drove to Virginia Beach where we put all our stuff in temporary storage at our daughter and son-in-law’s place.

We returned in time to meet Mike at the airport hotel in Jacksonville.  Then we drove over to the campsite, did a walk-around and we answered all his questions. 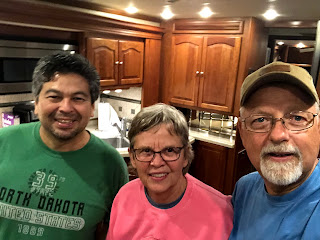 He and I went for a short test drive and then got the paperwork together to finish the deal.

The bill-of-sale had to be signed and witnessed and he handed over a check. Then we packed up and left the camp ground with the Roadrunner and our CRV in tow.

Pam and I agreed to help Mike deliver the coach to an RV storage facility and thought it would be good to have him drive the Roadrunner while we were onboard.  We also answered more questions as he thought of them. 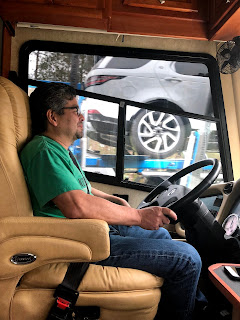 All three of us were going to Cordele, GA to the KOA where we had overnight reservations.

Mike got some time behind the wheel as we went up I-75 so it was a useful few hours.  We arrived at the KOA and then I showed Mike how we set up and get plugged into the electric and water and sewer. 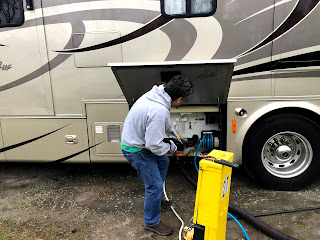 We went out to eat together and then dropped Mike back off at the Roadrunner while Pam and I got a motel room in town.

The next morning, we drove back over to the campground, hooked up the CRV and then we drove to the Atlanta airport where Mike rented a car.  We later joined up at the National Indoor Storage facility in Lawrenceville, GA about 20 miles away.

Then we unhooked the CRV for the last time, shook hands and departed while Mike checked the Roadrunner into the storage facility for the next three months.

He was working as a civilian in Germany and would be back in May to pick up Roadrunner with his wife Joan.  They were then going to drive it to Alaska which was his next duty station.

Later we heard from them on their way to Alaska and they said the coach was driving ‘flawlessly’.  They did need to get some fuel filters changed out (which we discussed as a possibility after sitting in the storage facility for three months), but all in all it all went well.

It truly was a win-win.  We were thrilled to be getting the price we wanted and they were happy to get the Roadrunner.  Hopefully it will have another 10 years of happy camping left in it.

So, those are some of the high points in the story, “How We Sold the Roadrunner.”  It unbelievably happened almost a year ago.  It doesn’t seem possible.  I captured some of the sale here.

The last 12 months have flown by.

We remember our days on the road as Wonderful Times!  It was a magical time and we love reminiscing about it. Hopefully there will be more in store for us, but it will be different.  And that is OK.

Do we miss it?  Do we have regrets?

Sometimes I think about it and miss our time on the road but quickly remember it was perfect timing for us.  It was the right time to move on.  We are so glad to be here in Norfolk/Virginia Beach and have a wonderful “Post RV life.” We are very blessed to have our kids (son and daughter-in-law in DC, and our daughter and son-in-law and two grandsons 12 minutes away) near us.

Our house, neighborhood, church and new friends are a real blessing and we are so thankful!