We were up early and ready to roll out of our campsite at Fort DeSoto campground in St. Pete.  It was a little tight but we went slowly and negotiated the turns fine.  We had to dump tanks so that took an extra 15 -20 minutes.  It was a fairly easy drive to catch I-275 and then I-75. 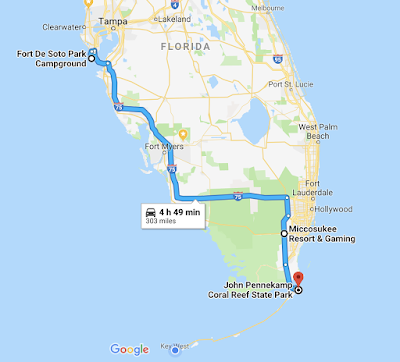 We were planning on spending the night at the Miccosukee Resort and Gaming Casino parking lot that night.  We made pretty good time even though we caught the morning traffic in Tampa and found more near Fort Myers and Naples.

About mid-morning we were talking about dry camping in the casino parking lot.  We are not big fans of casinos but many have RV accommodations or allow overnight stays.  Each of the three previous visits to Key West we have stayed at this casino.  Pam wondered out loud if there might be a campsite at John Pennekamp State Park which was another 40 miles down the road.

We called and to our surprise we were able to get the only reservation they had for the night.  We made a diesel fuel stop at our favorite Tom Thumb convenience store along the way and arrived at the state park for check-in about 2:30 PM.

We had some tree issues but were able to move the Roadrunner forward in the campsite and park it to one side so our DirecTV dish somehow missed the nearby trees. 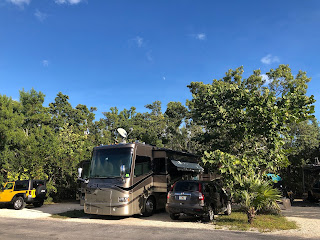 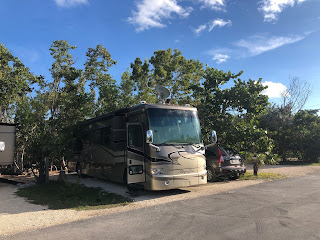 It's always a good day when we have good wifi, a level site, cell phone service and satellite TV.  All the comforts of home.

We were parked in between three couples who were all from Quebec.  We talked with Diedre and Dianne who were a real nice couple.  They had a Monaco which they purchased in Toronto.  We compared motorhome stories and could relate to different issues we've experienced.

They were off to get some time near a sandy beach while I was setting up.  When they returned we talked some more.  They asked if I wanted to learn or improve my French? and invited me to Happy Hour with their friends.  It was nice of them but it had been a long day so I declined.

We had a great night's sleep and pulled out of our spot into an open area to connect the Honda behind the Roadrunner.  Pam noticed something in the back of the motorhome engine compartment.  I opened both doors and realized some of the insulation on the engine compartment was laying on the engine.  The insulation tape (looked like regular HVAC tape to me) had come loose.

I knew I should have at the time, but the was a little disconcerting, so I didn't take a single picture.  I was more concerned with assessing the damage.  We could not reach far enough into the compartment to cut away the portions of the insulation that were hanging down and knew that we had to access the area from inside our bedroom.

We had new carpet installed last year so it made it a little more difficult to find the four screws securing the compartment access lid from the bedroom.  We were not on a schedule so that was good.  We were able take our time and remove the large trim wood board underneath the closet door and then take out the screws.  Lifting the bed, we pulled out the lid and shined a light into the engine compartment.

We cut away three pieces that were hanging down and removed them.  There were three pieces of insulation on one side of the compartment that we cut way.  I inspected it all and didn't see any more out of place and buttoned it all up.  Later, I called Brannon at Custom RV in Red Bay and asked if there was any risk and he said we'd be OK like it was until we got it all replaced.  The bedroom closet floor was likely to be hotter than usual during our travels but we should be safe.

Another noteworthy start to our driving day.  Off we went toward Key West.  We passed through Key Largo, Islamadora, Marathon and the rest of the Keys on a beautiful day. 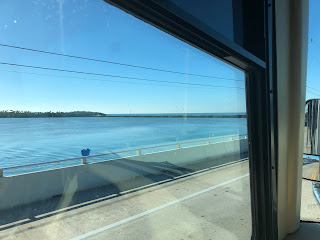 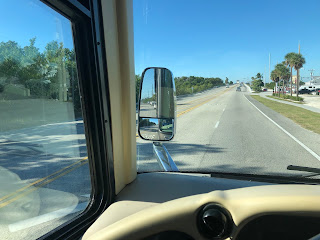 It is one of the scenic drives in America and a favorite of ours. The water is clear and blue and just what you'd expect in a tropical place.

We looked closely for hurricane damage from Hurricane Irma that hit landfall in Sept 2017.  It was pretty amazing, but we could see very little of the hurricane's effects.  We hardly saw any debris and only a couple of buildings that were damaged.  We did some a lot of new construction since our last visit to Key West in 2016.  There obviously was major destruction going on during the hurricane.  The cleanup was a testament to the hard work and ability of the cleanup crews to get it all back to normal.

Our campground is the at the Sigsbee Naval installation at Mile Marker 3.  We checked in were able to extend our original reservation through January 8, 2019.  They have 90 sites with full hookups and 310 dry camping sites.  If all the spots are taken in full hookups, we spend time dry camping until our turn comes up.  Campers get two weeks of full hookups and then rotate again to dry camping or leave.  It is very organized. 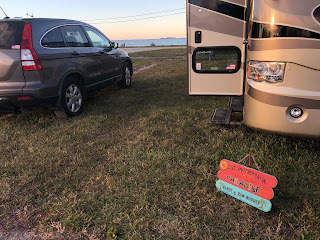 Our first order of business after we got our site was to grab some lunch at one of our favorite places:  Sandy's Cafe: 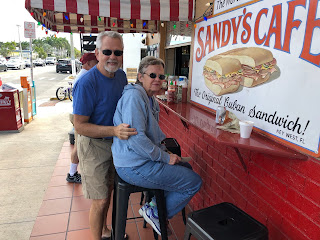 Then we went over to Island Bicycles where I rented a seven-speed hybrid with airless tires. They are solid and work surprisingly well.

The next morning I set off on one of my most favorite things to do in all our years of full-timing.  Ride my bike around the island of Key West.  I just love it. 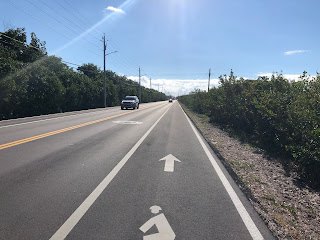 The 13+ mile route around the island was full of memories from our previous three visits here over the last 10 years. 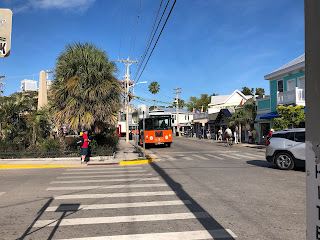 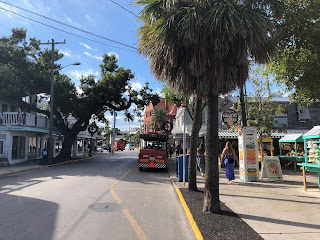 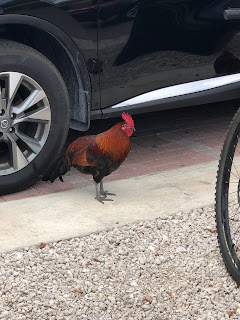 I took a lot of pictures and had a nice leisurely ride.

We were able to extend our stay and intend to be here for three weeks.  We are off to a great start.

Thanks for joining us today on the Roadrunner Chronicles.

Posted by Roadrunner Chronicles at 5:09 PM