Tooting Your Own Horn

Sometimes you can't help it.  It just happens and before you know it, you are tooting your own horn.  I've thought about the whole idea many times and usually it is not a good idea.  Or at least the best option if you have a choice.

I know what you are thinking...

Or at least I think I do.

But there we were, moving down the highway in Massachusetts, heading west toward Albany.  We were on I-90 had been passed by a couple of long I-beams being escorted with flag cars and State Police.  It was about 1:00 PM and we were cruising at about 62 mph with the Speed Limit posted at 65.  All was well.

We caught up to an I-beam convoy (the I-beams looked like bridge or overpass replacements) that was in the left lane.  The more I thought about it, the more it made sense.  For some reason, the left lane looked like it was a little wider than the right, and merging traffic was less likely to impact their movement.

So there we were, and we approached the last State Police car.  We were about to go even with him and our calm setting developed into a bit of a crisis.

Our air horn went off!

Talk about being a little un-nerving!  I thought maybe I was a bit too casual in my driving and had lapsed into a fog and let my elbow rest on the horn.  Nope!

Wow!  I was thinking, that was rude!  Oh wait...it IS still rude--- this is not over!  I pounded the horn (the space in the middle of the drivers wheel) to get it to turn off, thinking it was stuck.  --- Nope!

It continued to blare away and I was passing the State Police and escort car on the left.  Hmm--need some quick thinking here...

Nothing came to mind-- no such help at the moment.  I pounded and lifted, cajoled and nothing-- it was still screaming away.  Hmm---

Next thought I had was to put on the flashers so the convoy on the left (that I-beam seemed as if it was 100 yards long)  might be able to figure out this was not what I intended.  I didn't mean to be honking at them.  There was no one in front on me and a quick check on the mirrors revealed quite a few vehicles behind me...

I was quickly out of ideas of what to do, and about that time (we were probably into minute 2 of this little adventure...) Pam got out of her seat and reached over me to flip the switch on the driver side console (the row of switches including one that said "HORN").

That complicated things.   Now, I couldn't see much as I was driving down the highway.  Oh man!  I calmly told her, (I wish) that I could not see very well and that I had already checked to see if the switch was the culprit.

Yikes!  By now we about mid-way along the right side of the I-beam convoy.  With flashers going and no satisfaction in pounding the horn, or flicking the HORN switch, I decided to speed up and pass everyone.  That way people could move around us.

As I went passed the front of the convoy on the left, the State Police car at the head of them slowed down, thinking ...  ?  who knows what he was thinking?  Meanwhile, I was beginning to surmise this horn was going to blast away forever.  On to plan B.  Or C, or where ever we were in this daytime nightmare...

Thankfully, there was no smoke or fire or any other safety issues that we could see.  Except for the fact there was no shoulder on the road where we could pull off.  By now, we were probably into minute 3 or 4 and we looked for an exit.   We found one a little over a mile away.

Gladly we took it.  My mind was a bit flustered so-to-speak and I was thinking maybe we could find a fuse to pull and turn the thing off.  Hmm,  next question was where was the fuse for the horn?

Meanwhile, the horn was not giving up.  It continued to blare and blast! Oh man...

About 100 yards from the exit, we came to a stop and turned right.  We saw a T-intersection with a turnout about 200 - 300 yards up the road were we pulled off and parked.  I double checked the "HORN" switch on the console again, and I pounded the wheel again hoping it was stuck or something.  No help.

Wow!  The horn was really loud and a bit annoying.  Did you know how badly a loud horn interrupts one's piece of mind and ability to trouble-shoot/execute analytical thinking?

Man - OK, let's see, there is a bay door underneath the driver's seat I could unlock and take a look at. Maybe there was a fuse there that had something to do with the horn.  I opened her up, we both took a look.  No help.  Nothing labeled anything that related to the horn.

We knew there was a fuse box under the middle console, hidden on the floor under the two drawers.  We took those out, shined the flashlight (that horn was really irritating by now and we were a bit on edge) and could see the scheme of things on the inside of the fuse box cover. 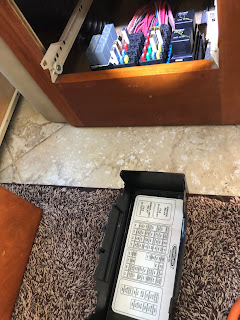 Sure enough there was one labeled "HORN".  Yay!  Maybe success was just around the corner... I had gotten a pair of needle nose pliers from the car and Pam pulled the fuse.

Maybe we got the wrong one? ... check and double check... No, that was the correct one.  She tried pulling and replacing a couple other ones with similar results.

WOW!  This is not going well!

Last resort was to call the Tiffin Service Desk.  I semi-calmly (we were probably into 10 minutes of this deal at that point), spoke to the lady on the other end of the phone and she politely asked if I needed the Parts Department? or Service Department?  I asked her, "Can you hear that horn blaring away??--It is stuck in the on position and I need to speak with a tech in Service please"!

We waited about four minutes and Jonathan answered.

I asked him if he could hear the blaring horn, Yes, -- yes he could.  I may have been projecting a little concern or something there, but I distinctly noticed a difference in his tone of voice as he tried to help.  He asked what year make and model of the coach.  Then he said, "Wait a minute, while I pull up the diagram for your coach".

Yikes, this was going to take some time.  The air horn was still blasting away.  Then things changed.  There was a motor sound or something, but the air horn quit.  To my surprise, the regular horn was working fine and was blasting away.  I flipped the "HORN" switch on driver side console again.  No change.

Now we had a new concern.  We noticed a bit of a 'hot' smell and the motor was whining away against the backdrop of the horn going off.  I was hoping we weren't progressing toward more serious issues...

Jonathan got what he needed and came back on the line, then told us to pull the fuse.

Check.  Did that.  Horn still blasting.

Hmm, he said, "Well I guess the only thing you could do is pull the wiring".   Sounds good to me!  I asked him how I do that?

He said, pop the generator toggle switch under the front driver side bay door (where we had just been), pull out the generator as far as it will go.  Next,  look on the firewall for something that looks like a horn.

Pam reached inside with the flashlight, found the horn,  saw a wire leading to it with a white plastic connection piece in the black plastic housing, unhooked it and SUCCESS! 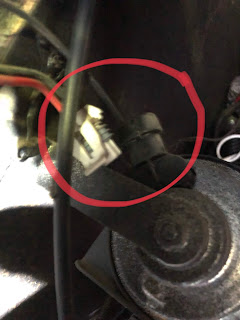 Our nightmare was over!  Phew!  We pushed the generator back in and secured it.  We locked the bay door and went back inside, put the cover on the fuse box, and put the two drawers back in.

Wow!  Another bizarre and strange deal in the life of an RVer!  Still don't know what may have caused the horn to go off.  Pam was speculating, maybe some of the rain we had been going through earlier in the day had caused a short in the system?  Don't know.  We've been through a lot more rain and that never happened.

We waited for things to calm down some and then continued on our way.  One more item to add to our repair list.  And to add to our list of adventures.  We drove through the little town at our exit to find an access point to I-90 and had no further incidents.  That was enough for one day!


Posted by Roadrunner Chronicles at 9:15 AM