It was about a 40 minute drive into Quincy MA from our campground at 4th Cliff  MWR Campground.  We left about 9:15 AM and were in no rush since this was the only place we were going to see today.

We took the backroads and did a lot of winding around and went through some old neighborhoods before we finally ended up at the birthplaces of both John Adams and John Quincy Adams.  The buildings are in their original location and 75 feet away from each other.

My first impression was that the buildings were probably relocated and place on the same corner of the block which was a barely large enough for them. 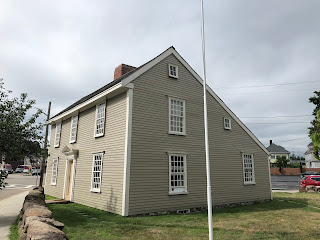 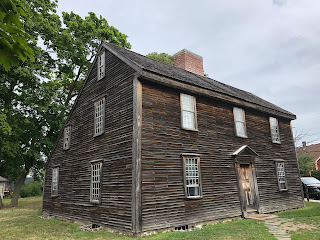 We were surprised the buildings was closed and only "open for tours."  Hmm.  Wonder what that meant?  We rechecked our Google Maps and found we ended up at the Birth Place and not the actual Adam's National Historical Park.

Turn's out the National Park Service Visitor Center  for the Adams National Historical Park is in an office space rental in a corner of a large building in downtown Quincy which also has a parking garage.  This was unique and different than other historical sites we've visited.  Once inside, we learned there was a trolley bus that took visitors to the birthplace site and John Adam's retirement home ("Old House at Peace field"). 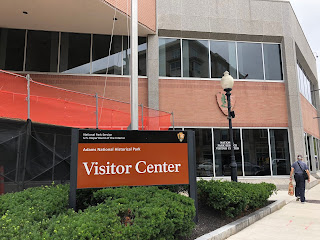 We were scheduled for the 11:15 bus and had some time to kill.  We saw the orientation film on the Adams and their contributions to America.  The tiny center had one display that had a lot of information. 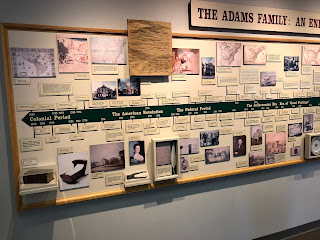 We all boarded the trolley bus and made the 15-20 minute drive to the first stop:  the birthplace homes of John Adam's and John Quincy Adams. 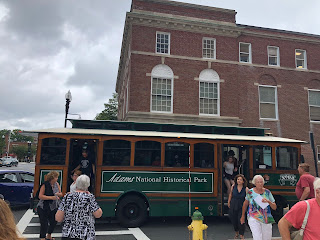 Pam and I were in the front seats and at the first intersection, the driver turned to me and asked if I could tie a tie.  ?Yes, I said, I knew how to do that.  He asked if I wouldn't mind tying a 'double knot' in three ties that he handed me! 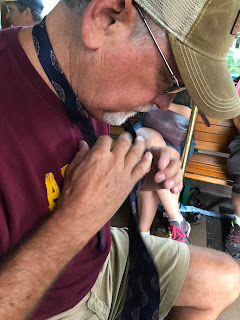 I was glad to help and felt as if I was on some gameshow in a race against the clock.  I tied the first one, it was too short, so I retied it.  That took a few minutes.  I managed to get it the others tied, slipped them over my head and handed them back to Stanley when we pulled up to our stop.  He was from Haiti and thanked me.  It was my pleasure!

I was glad to help and thought of all the times I watched my father and older brothers tied their ties and taught me.  Its nice to be useful.

At the first two buildings/birthplace homes, we had a young lady who really knew her stuff.  She did a great job of giving us a history lesson. 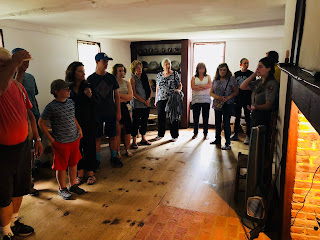 John Adams was quite an accomplished statesman, serving as the first Vice President under George Washington and later becoming the second President of the United State.  He collaborated with Samuel Adams, served as a delegate to the Continental Congress, and assisted in drafting the Declaration of Independence. 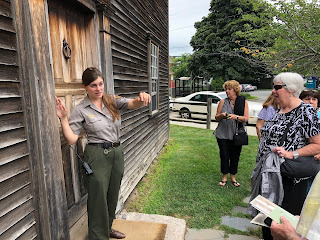 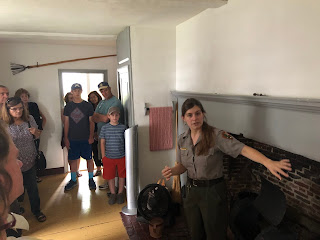 After an hour, we boarded the trolley bus again and went over to the Old House, also know as Peacefield.  After John Adams served as ambassador to England, he and wife Abigail purchased the Vassall estate and 40 acres.  They moved into it in 1787 and over the next 12 years made additions.
After failing to win re-election in 1801, Adams returned to the Old House where he resumed farming and writing.

We got another really good Park Ranger for our tour.  Very interesting and informative. 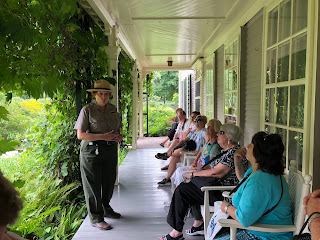 Abigail furnished the house in the Victorian/English style with many reminders of European influence.  She had grown accustom living in Britain while John Adams was ambassador and referred to her knew home as a wren's nest.  I 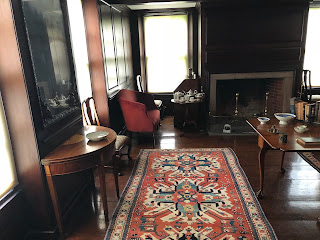 Unlike some other historical places we have visited recently, this home was furnished with many original and precious pieces. 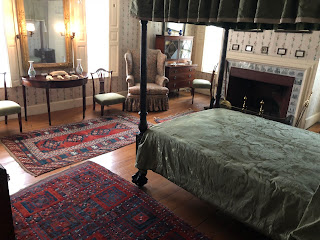 The paneling in this room was solid mahogany.

This was the study where Adam did a lot of writing. 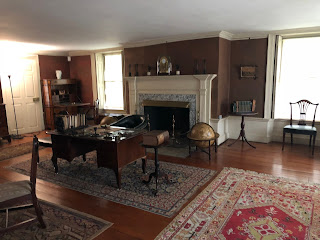 In one of the back hallways, Abigail's china was on display. 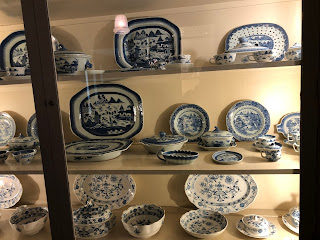 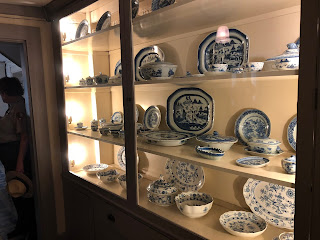 Before we concluded our tour, we took a look inside the Stone Library which was separate from the Old House.  To guard against potential fire destroying his collection of books, he had a building created in 1870 which housed 12,000 volumes in his collection.

Four months before he left office, John and Abigail Adam's moved into the "President's Mansion" later know as the White House in 1800.  Abigail died in 1824 and John Adams died on July 4, 1826 - a few hours after Thomas Jefferson died.

My impression of the Historical Park changed after taking the two hour tour.  The two birthplace buildings were in their original location for us to see.  The 200 acres of Adam's property has been swallowed up by 'progress' and is now hidden among the busy streets and residential neighborhoods of Quincy.  The Visitor's Center is a bit odd.  But I'm glad we took the time to see it all.  It was better than I thought it was going to be.  I learned a lot.

That's all for this time, on the Roadrunner Chronicles.  Thanks for joining us!

Posted by Roadrunner Chronicles at 9:07 PM