Time in Buffalo with Jon and Barbara

We are in the Buffalo NY area to see long-time friends Barbara and Jon.  We attended the same church while living in Hawaii in the 1980's.  We've been in touch ever since.  This was our third visit to their wonderful home and hometown over the years.

We started it off with a visit to the tennis courts where they have a weekly pickleball game.  Jon brings the nets and sets them up according to how many are there to play.  Tuesday night we had 7-8 folks and we had one net.  That worked out well so people could swap out and get a breather after their match. 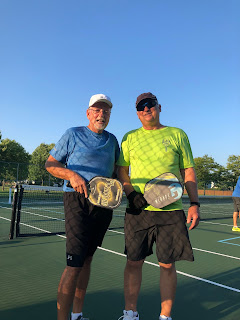 It was great fun.  I had forgotten a lot of what I learned in Arizona when I started playing.  But it was good exercise, good company, and I loved it.  It helped to have a good group of folks who coached me through the scoring, strategy and Jon even gave me some 1-on-1 time doing some drills on another court.

We stayed at Darien Lakes State Park which was about 30 minutes from them.  It worked out well. On Wednesday, we all drove in to Buffalo and then over to Niagra Falls.  It was a very hot day.  We parked on the NY side and walked across the bridge to the Canada side. 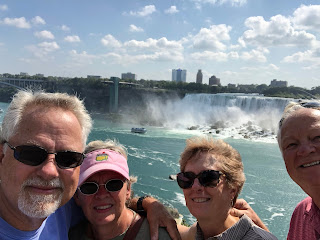 It is such an iconic view from the bridge. And the views along the falls from the Canada side were equally beautiful. 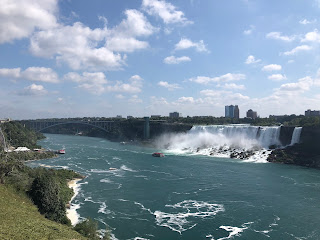 We walked all the way up to Horseshoe Falls before turning around and finding a place for lunch. 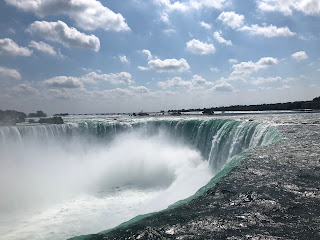 We ended up at Hard Rock Cafe and enjoyed the air conditioning.

Next, we walked back to the U.S. side and then drove over to a new and trendy area near downtown Buffalo called River Walk. 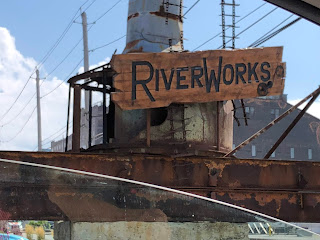 It's an area off the river where old silos and warehouses along the waterfront have appealing places to play and eat.  There is a hockey rink, kayak rentals, paddle boats, rock climbing, zip lines and a large brewery. 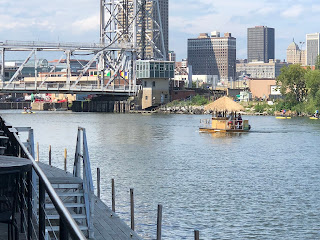 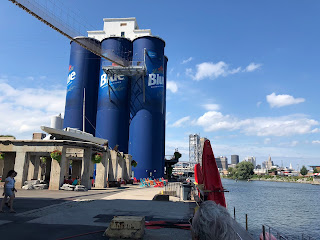 It is great to see how areas of town that were past their prime have been revitalized and now are a hub of activity.

We returned to their home for a nice time of conversation leading to dinner.  It rained pretty hard for a few minutes but Jon was able to get the shish kabobs on the grill and we enjoyed a great time together.

On Thursday, we returned and ventured downtown again to see the Teddy Roosevelt Inauguration Site.  This National Park Service stop is where TR took the oath of office to become president of the United States. 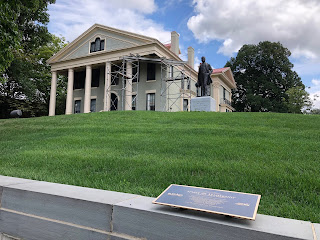 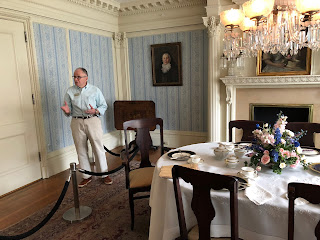 President William McKinley was in Buffalo attending the Pan American Exposition.  A 28 year-old anarchist shot McKinley twice.  Doctors removed one bullet but were unable to locate the second one.  That proved deadly a week later when gangrene set in and caused his body to shut down.

Roosevelt was summoned and arrived after he passed away.  TR took the oath of office in the Wilcox home which is where he was staying.  That building is the site of the present National Park Service commemoration of the inauguration.

We learned a lot.  I either didn't know or forgot (same thing?) how TR became our 26th president.  And I had almost no knowledge of the Pam American Exposition.  And I really knew very little about the impact of the Eerie Canal and development of Buffalo as an economic powerhouse in the late 1890's.

The Historic Site had a lot of great displays and interactive informational presentations.  In the first room, we watched a short video that gave the history of Buffalo and the Pam American Exposition which was attended by McKinley and six cabinet members.  It was a marquee event showing off the technological wonders of the present day. 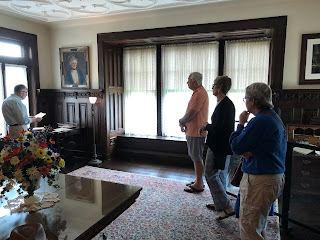 Upstairs, there was a multimedia presentation using recordings and pictures that reminded Pam and I of the cycle-rama at Gettysburg. 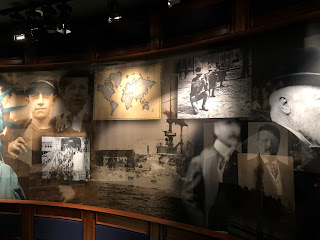 There, it was a mural in the round which was the backdrop for stories off the Civil War.  As a story was told, a spot light homed in on a portion of the mural and told the significant story about that piece of history.

At the inaugural site, there were a number photos behind a glass pane that were highlighted as the story was told.  It was very unique and a great way to make it all interesting.

After our time at the Inaugural Site, we went to lunch downtown at one of the craft breweries.  Next, we drove out to the cemetery at Forest Lawn where president Millard Fillmore is buried. 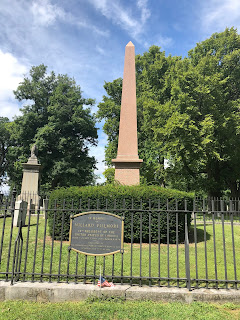 We looked around the beautiful grounds before going over to the Buffalo History Museum.

It resides in one of the few remaining buildings from the Pan American Exposition built in the Renaissance Spanish architectural style.  It was a beautiful building with lots of displays.


I liked the one of Tim Russert who was from Buffalo.  The exhibit was in the Newseum for and has recently been returned to this museum in Buffalo.  He was a long-time host of "Meet the Press". 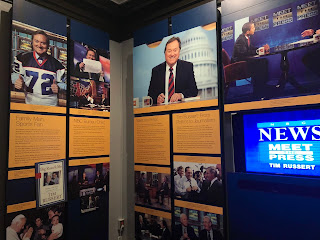 It was also next to exhibits of sports figures that were from Buffalo or played for a Buffalo team. 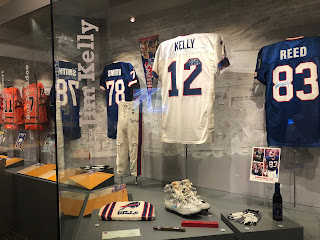 Jim Kelly's jersey from his time with the Buffalo Bills and a signed baseball from Warren Spahn. 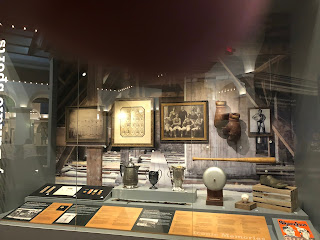 The museum had three floor of displays which we wandered through.  The museum was getting ready to host an event for the evening.  It was time to go and we had seen a lot in the couple of days we were in Buffalo.

The special part of our visit was spending it with Jon and Barbara.  It another great memory we have on the Roadrunner Chronicles.

Thanks for joining us!

Posted by Roadrunner Chronicles at 8:52 AM