This is our second trip to Downeast Maine.  Six years ago we were here over the 4th of July weekend.  It was busy then, but not as busy as it is now.  Despite the crowds we have had a great time the last few days.

We are camped at Forest Ridge Campground in Ellsworth, ME which is about 15 miles from Bar Harbor and Acadia National Park.  One great thing about this lifestyle is seeing friends and meeting new ones.  On Saturday we took a short drive to Orrington, ME which is outside of Bangor.  We arrived at Rick and Barbara's place for a gourmet lunch (Menu - Asian spring roll, cole slaw, corn on the cob, chix lobster) and some catching up time.

Rick and I were in the same unit (Constant Watch PMO) back in the 1980's when we were stationed in Hawaii.  He relocated back here and he and Barbara finished their careers here.  It was great to be able to meet up with them again and enjoy their hospitality.

Earlier in the week, blog readers Randy and Pat, let us know they were camped near us and we got together on Sunday.  We met for the first time at this beautiful church 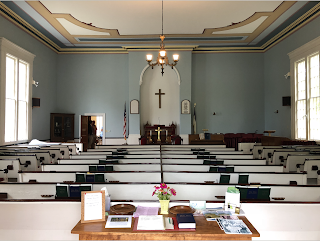 then went to lunch.  The time passed quickly at Finn's Irish Pub in Ellsworth.  I think we all had fish sandwiches which worked out well. 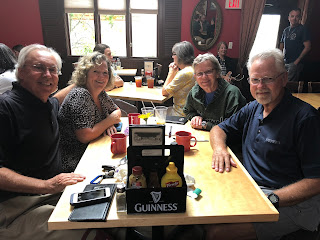 It was fun hearing about their 18 months on the road and learning of their three kids and what they are up to.  Randy and Pat are from Indiana but moved to Christiansburg VA where they retired and became full-timers.  Check out their blog:  click here

We got together again for some hiking in Acadia National Park around Jordan's Pond.  We drove over to the Visitor Center and took the free (LL Bean supported) bus to Jordan's Pond. 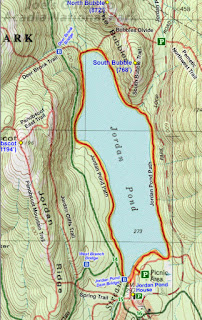 It was misting a little bit and we waited for the rain to let up.  Pam was the only one with a rain coat so the rest of us got a $1 poncho before we started out. 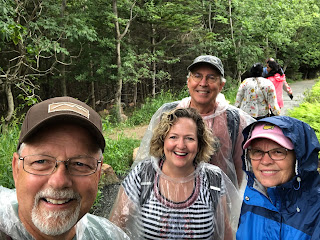 We took the counter clock-wise route and it was a beautiful hike. 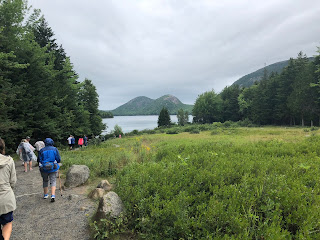 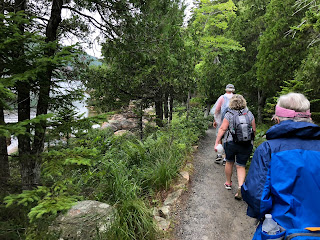 Pat noticed some beautiful tree growth through some rocks. 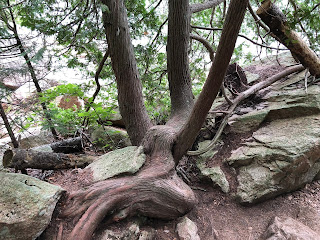 We also saw some evidence of beavers at work. 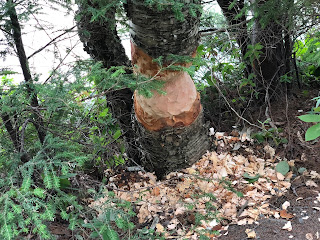 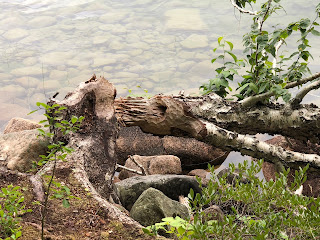 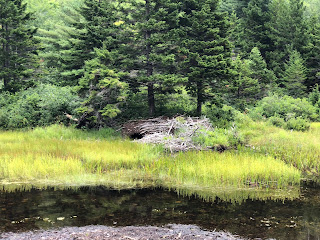 The trail was the busiest hiking we had done in quite a while.  But with the steady stream of traffic, we were able to have a fellow hiker take our picture. 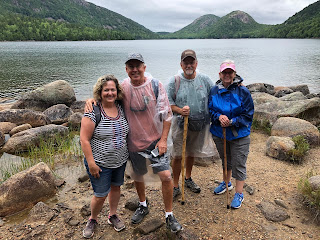 In the distance are the Bubbles.  The North Bubble (left) is 872' and the South (right) is 766'.  We passed near them at the far end of the pond.  At the end of the far end is this cool footbridge. 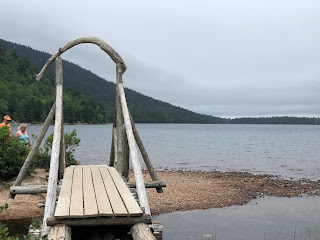 The first half of the hike took us to the far end of the pond.  On the return, we entered into a more difficult rocky area. 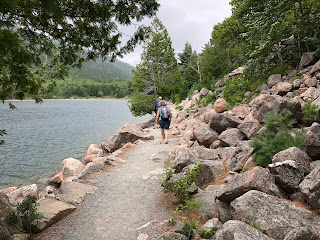 Though I didn't take any pictures, the rocks were part of the actual trail and we slowly hiked a couple hundred yards over them. They were flat and it was it was an easy hike. 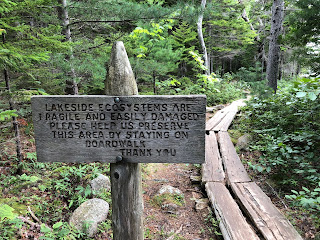 Then we traveled along the board trail area.  This portion seemed to go on forever.  It was probably about 1/2 a mile but it required your complete attention.  I was concerned the split logs would be slippery with the light rain but it was not an issue. 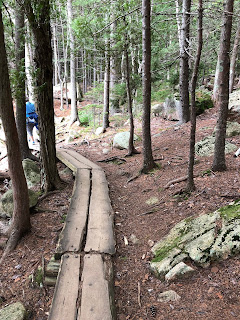 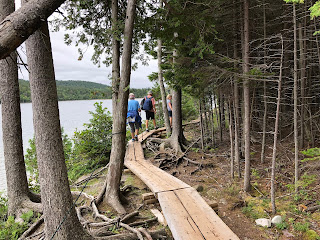 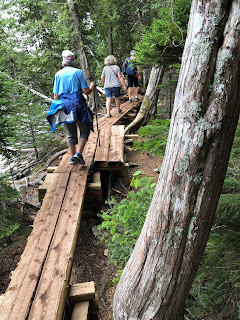 Toward the end of the hike, we paused for about 20 minutes and had our picnic lunch off the trail near some rocks. 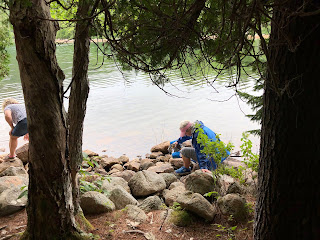 When we finished, we visited the gift shop again and then boarded the bus for the return trip to the Visitor Center. 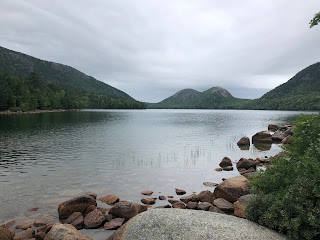 The hike around Jordan Pond is almost a 'must do' while at Acadia National Park.  And it was great spending time with our new friends Randy and Pat.

Posted by Roadrunner Chronicles at 8:38 AM