We always love coming to Red Bay.  This time we have appointments to get some things done at Bruce Deaton's Custom Body and Paint Shop (two bay doors), Brannon Hutchison's Custom RV (vent fan, new digital antennae) and Bay Diesel (new shocks and front a/c).  There are other things on 'the list' but those are the main items.

For the second time now, we are staying at Downtown RV. 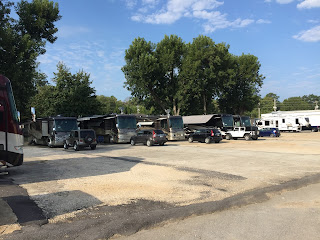 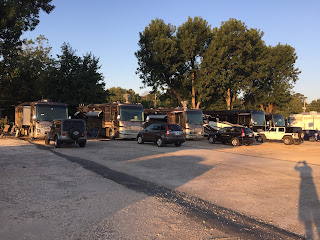 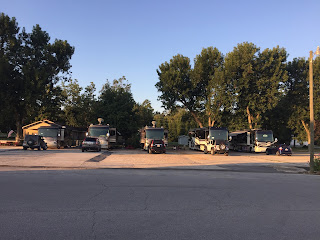 We like this place because it is within walking area of a lot of places.  It has some shade and the main reason this time, is that friends Steve and Karen (GoneByRV blog) area here.

We arrived on Saturday morning after a pleasant drive from Mid South Naval Station outside of Memphis. Our reserved spot was open and we got set up in no time.  There is a good group of people here and they have a nightly social hour.  Its always nice to chat it up and get to know some new folks.

On Saturday evening we had a potluck under the big shade tree in the RV park. 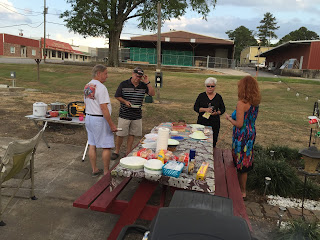 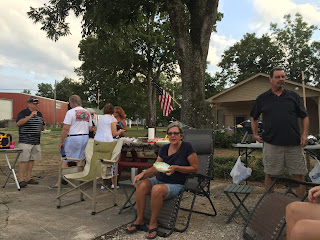 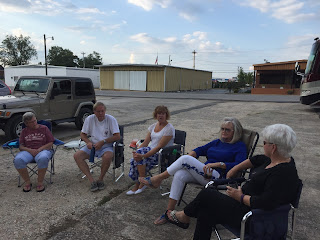 We had so much food left over, we decided to do it again on Sunday evening. 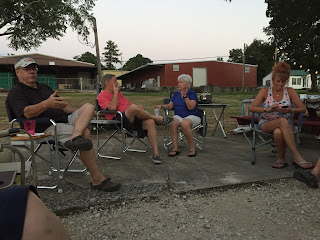 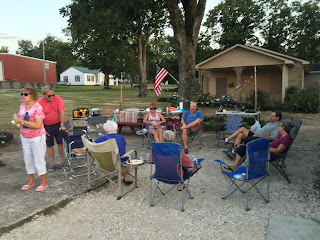 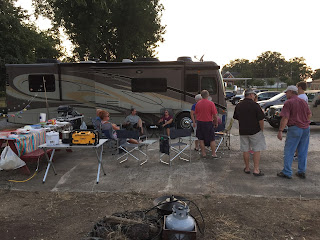 This is one of the most things we do -- hang out and chat with folks and learn about their story and share some episodes in ours.

I walked a block over to the Red Bay Food Mart and got two to-go boxes for bacon, scrambled eggs, and biscuits and gravy -- one with white gravy and one with chocolate gravy. 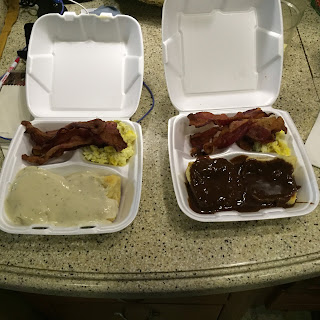 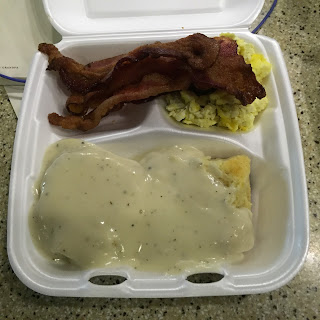 The chocolate gravy was something I had a hard time wrapping my head around when I first heard about it.  But then I thought about chocolate donuts and I like those.  I normally don't have bacon and eggs and chocolate donuts.... 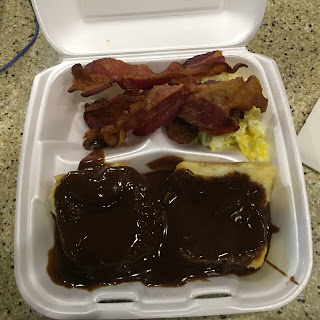 So here's a closer look.  I ate the bacon and eggs first and then the open faced biscuit with chocolate gravy.  It was pretty rich and a little too much.  I actually ate the whole thing just to give it a fair try.
The verdict?

But the food at the potluck was really great.  Pam made an Asian Salad, Karen made a fruit salad and cupcakes, Marty made Navy beans with ham and rice, Yvonne made deviled eggs, Suzanne brought shrimp cocktail and wrapped bacon weenies, and Nancy and Dave cooked some brots.   It was a feast.

On Sunday, Pam and I went for a long walk over to the Allegro Campground and back.  It has been very warm here but we got out and back before it started to heat up.  I found a large shade tree to wipe down the CRV and wax it.  Then we downloaded a sermon and listened to it in the Roadrunner Chapel.

Later Joe came over from the Red Bay Self Service RV Park and we had a nice long chat.  Hadn't seen him and Carolyn since the Tampa RV show in January.  It was a nice Sunday.

Later on in the afternoon we watched some golf and joined in the social hour/pot luck.  It has been a fun start to our time in Red Bay.


Posted by Roadrunner Chronicles at 9:39 AM