We always have a list of things we need to get done when we go to Red Bay.  The list usually starts shortly after we leave.  Sometimes it's a matter of finding out how to fix things and other times we pay to have someone do it.

When we tell folks we are going to Red Bay often times they will ask what are we getting done this time.  It is usually is a mix of 'must fix' items, routine maintenance and things we'd like to have upgraded.  Here's a list of what we had done during our recent stay:

Here's what we did for each item:

We called HWH and for a replacement touch pad on the driver side console to raise and lower the jacks.  We got voicemail and finally got a return call 7 or 8 days later.  They need to go to two shifts or hire more people.
I called Tiffin parts and they had the item in stock.  I could get is sent to us for over $300 or pick it up in the parts store for $141 which we did. 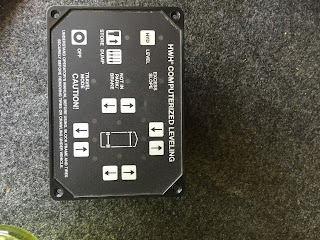 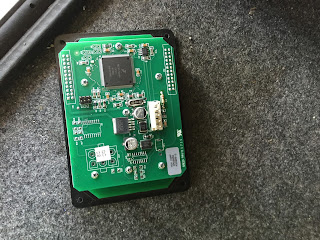 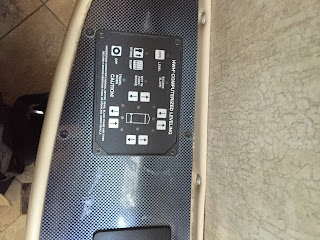 While we had the Roadrunner parked out front of Bruce Deaton's and it was drying, Bruce came out and adjusted the door latch and sprayed everything with WD - 40 silicone spray.  Not entirely fixed but works better. 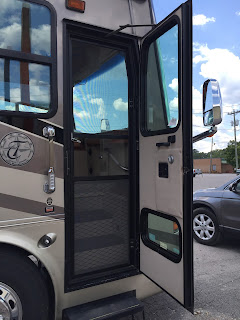 All these issues got fixed when Brannon cleaned out the a/c downspout.  The hose was crimped behind the driver side headlight.  Once that was slightly rerouted and straightened out, it immediately unclogged and discharged a lot of water that was in there.  Drains correctly now.

Driver Side overhead lights and outlets quit working
Pam hunted around inside for the fuse for the outlet on that side of the motorhome, checked out the GFI switch and finally found the breaker switch (the fuse panel under the refrigerator) had tripped.  She reset it and all the lights came back on.

Keyless entry quit working
Pam took off the corner fuse panel cover in the first bay under the Passenger Side seat.  It was secured by four screws.  She hunted around and found the correct fuse and replaced it. Works fine now.

-Dash air conditioning not working
-Shock absorbers on all four wheels need replacing
-Two year maintenance on coach differential
Took the Roadrunner over to Bay Diesel and they replaced the air dryer and checked the freon.  Works great now.
All shock absorbers were replaced with Koni shock absorbers. 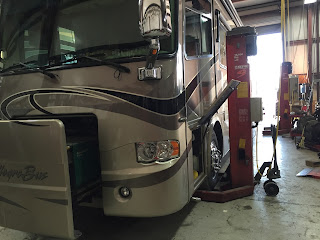 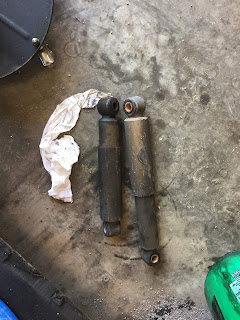 Standard maintenance on the differential done at Bay Diesel. 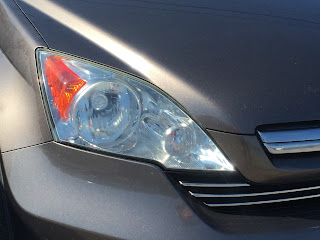 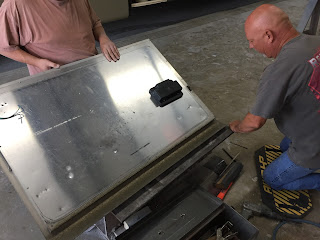 The headlights were buffed out and sprayed with Clear Coat
The bay doors were banged out, straightened, contoured with bondo and smoothed out, primed and painted.  Both items were done at Bruce Deaton's Paint and Body shop.

Digital antenna old and needs replacing
The handle on the antenna was getting harder and harder to turn and it kept coming apart.  The antenna on top of the Roadrunner needed to be raised and lower for every wash and wax and it was getting bent.  I had heard good things about the newer Winegard Razor digital antenna so we had Brannon replace our old one with it.

Roadrunner wash, wax and wheels polished.  Awning covers and arms were looking bad
I hate to pay anyone to wash and wax the motorhome so I did it myself.  I worked especially hard on the roof and cleaned and waxed it, hoping that I could prevent the vinyl top and white streaks from dripping off onto the sides of the coach.  Brannon indicated the only good way to stop that is to Clear Coat it.  Might do that one day.
One thing that caught my eye was how nice Bob and Steve's wheels looked.  Bob does his own and Steve was having Jarold (local guy) do his.  For $90 He agreed to do all four of mine so he started on mine in the heat of the day.  He finished one wheel before he gave out and I spent the better part of the next day cleaning and polishing the other three.  They came out well but it was knuckle busting hard work.  I'm glad I cleaned them well this time. From now on it will be easier to maintain and get the shine going. I used Meguiars Mirror Glaze 3 on all the arms and metal awning covers which brought back their dark sheen. 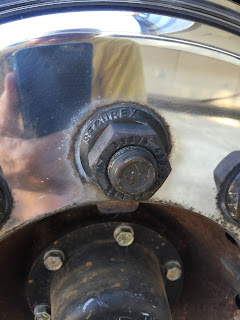 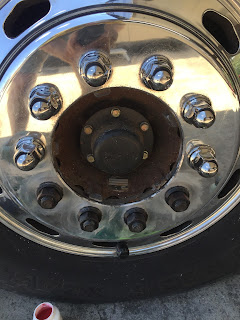 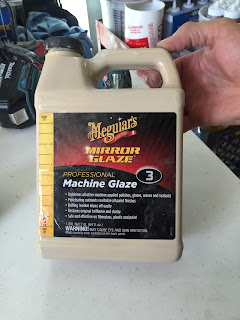 -Tow electric connector cord dry rotted
-Rubber seals around each slide cracked and need replacing
We took the tow cable off and measured it and Brannon ordered a new one for us.  We did the same thing for the tow electric cord.  It was so old that it was dry rotting.  I taped it up a dozen times and the cord would crack some more.  Because of all the tape, it lost its coil.  Both items were replaced and work great.
The rubber seals are hard to get to and a knuckle-busting experience.  Brannon replaced three that needed a new one and they work well. 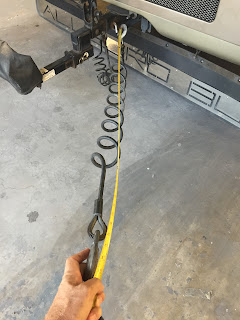 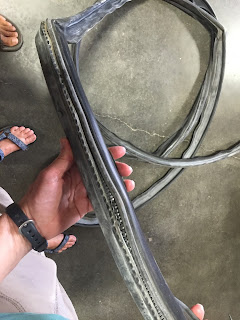 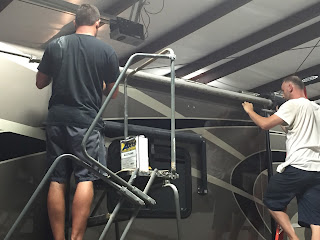 I didn't get pictures of all the work done but I got many of the items.  It is always good to get things fixed and do the maintenance.  While some are able to purchase new motorhomes after a few years, we are likely going to keep this and are planning on it being our one and only Class A.  We've seen a lot of motorhomes on the road that are a lot older than ours and are doing our best to make it last.