Week 2 Complete at our Habitat Build

We finished up our second and final week of work at the Lynmore Estates in Macon as part of the Care-A-Vanner build with Habitat for Humanity. 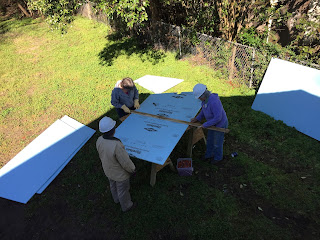 One of our goals for the week was to start siding all the way around the house so volunteers over the weekend and in coming weeks could continue it to completion.  First we had to get it over to the house from the warehouse where it was stored. 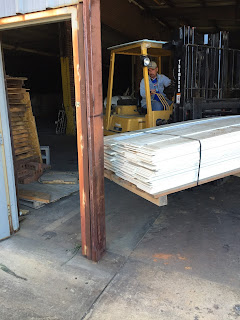 Jerry had to angle it through the doorways of the warehouse on the forklift since it was about 8 inches wider than the door.  He took a couple of runs at it but managed easily.

The cement fiber board (also know as Hardy board) went up pretty easily after we got going. 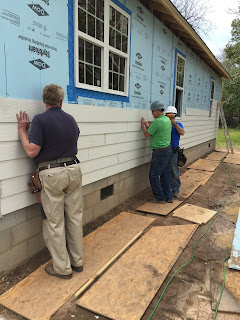 It really looks great after it is up and painted.

Bruce can do about anything and here he is on the chop saw. 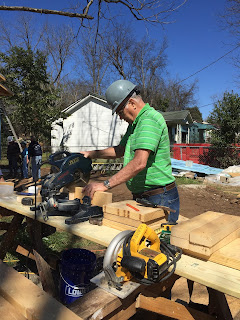 You have to get the corner pieces on correctly and Gabe and Andy are taking care of that one. 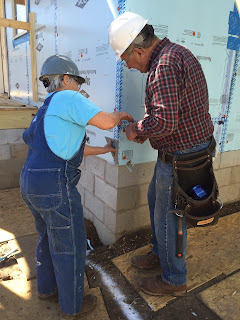 As we rounded out our week, we said good bye to Gabe and Bruce.  They are from the Columbus GA area and we've had the pleasure of working with them here before. 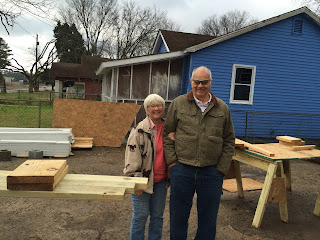 Colleen and Pam and I worked on the siding on the back of the house. 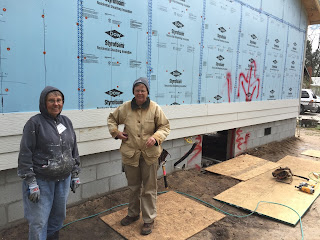 At the end of the day and a busy two week, Jim (the Business Developer and Volunteer Coordinator) stopped by.  He's one of those one of a kind guys, great at what he does and one of the most personable people you'd ever want to know. 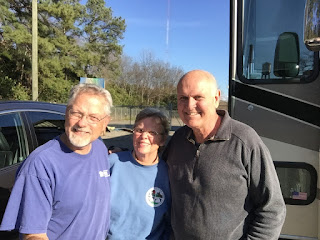 We've been to Macon three times now and he keeps the ball rolling and always spearheading upgrades and improvements for the RVers and the facility we get to use.  He also was responsible for lining up some donors so we could enjoy a three meals with folks at the church and at two eating establishments.  Very nice of him to do that!

Our last night there, we went with Barbara and Ross (can't believe we didn't get a picture of them!! - ugh) and some other folks to Yoder's Mennonite Restaurant out in the country (Montezuma, GA). 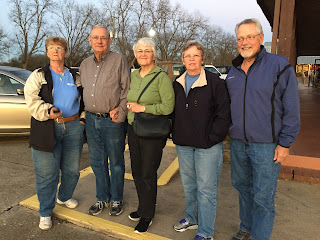 It was a great meal followed by a picture with Janet, Andy and Dot.  It was the end of another memorable couple of weeks in Macon.