Roadrunner Recap
In February, we visited the following locations along the Florida Gulf Coast and into Central Florida: 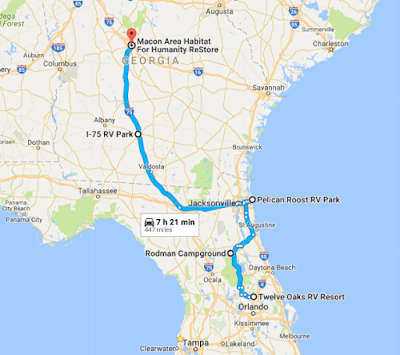 After our time near Orlando, we moved to Rodman Campground to explore more of interior Florida. Then it was off to a great military campground in Mayport.  The Pelican Roost campground is on the waterfront of the St. John's River with a lot of commercial and naval military traffic.

Next, we moved more north to our Care-A-Vanner build in Macon GA.  That's always a fun one because we get to see old friends including Pam's Maid-of-Honor, Barbara.

Good News Areas We Are Under Budget
We did pretty well in spending for the month in areas of fuel, campgrounds, and groceries.  Most
of it had to do with the fact we camped for free at the Habitat for Humanity site in Macon GA and did very little eating out while we were there. 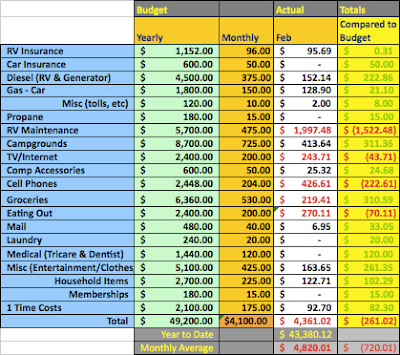 We had a very good month budget-wise but were not able to avoid the unexpected RV maintenance with the broken tailpipe which accounted for our overrun.

Biggest Expenses
We got new cell phones and switched from AT&T to Verizon in January.  The expected savings did not present itself.  In fact for a while, we were paying off the old bill and for the new coverage while we were gathering information to get reimbursed by our new carrier.

Large One Time Cost Item
The biggest item on the spreadsheet during the month was our $1997 bill for a broken exhaust pipe.  While leaving Rodman Campground near Palatka FL we noticed a strange sound in the engine.  Later, exhaust smoke was coming in the PS window so we had to close it.  Those two items turned out to be a tailpipe that broke at the exhaust manifold.

We were heading to a Habitat for Humanity Care-A-Vanner build in Macon GA and ended up getting the repairs done there.
Monthly Average 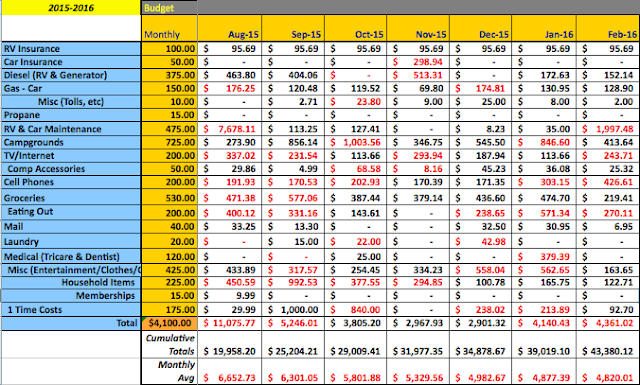 The basic story here is that we are on a clip for the first eight months of the Roadrunner FY (June 2015-May 2016) to spend a lot more money than we would like.  But this 'budget' I have often send is really more of a record of spending.  We seldom limit ourselves because of where the budget is.  This does give us a pretty good idea though, of where our money is going compared to what our planning goals are.

So this is a look at where our money went during the second month of the new year.