Getting fixed up in Red Bay

We arrived in Red Bay, AL on Sunday and were at Bruce Deaton's Body and Paint Shop early (6:00 AM) to get our crack on the front cap fixed. 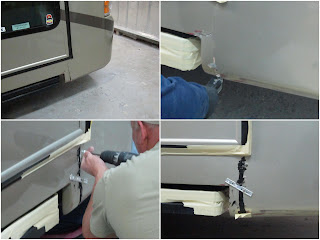 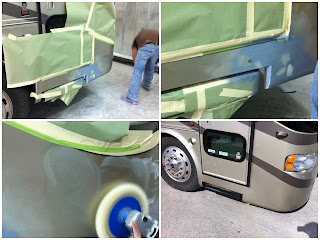 8 hours later it was done (along with the slideout topper covers I scraped going out of the gate at Maxwell AFB.) Total cost: $500.  I was very happy with his work and the price.

Then we got cycled into the Express Bay sequence at the Tiffin Service Center.  While waiting for a bay to open up, Nick came by and downloaded the latest DirecTV software for our system.  I think it upgrades the basic software and the HD operation.  Since we don't have an HD receiver or DVD-R yet, it just makes us ready for that option later on. 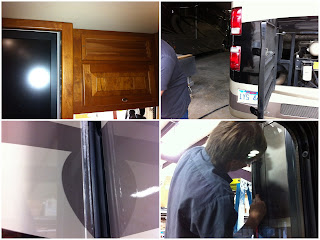 We had some water in the rear tail lights, so Brandon removed them and drilled drain holes in the bottom before putting them back in place.

The old rubber trim was rusting on the inside and coming off the edge of the slideout so Brandon and Ricky replaced it with a new trim. 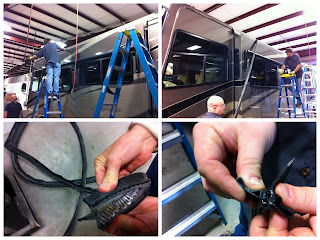 After that, we moved on to another bay to check the hydraulic leak under the front PS corner.  It was in the hose for the slide out pump.  They found the leak and put on a new connection. 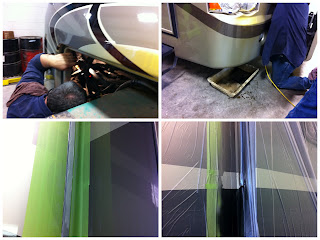 Our last stop was at the paint and body bay where Anthony worked on two slides that had rubbed against the coach.  The rubber trim had failed so it was metal against metal.  Also we found the seam along the PS galley slideout was separating and the paint was cracking so he patched it up to, repainted it all and caulked over the whole area.
Cost for our time in the Tiffin Service Center:  $20/night and $228.43.  That was a welcome surprise.

While in our first bay, we found a chunk of tire missing on the right front one. 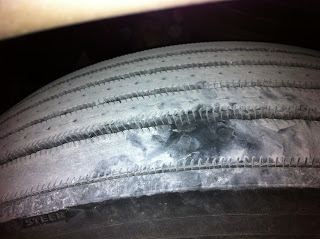 Yikes!  Glad we found that here and not while we were barreling down the road at 60 mph!  We made an appointment for Monday in Muscle Shoals at Simmons Tires.  We were hoping to have the current tires last until next year which would be at the 7 year point.  But we can't risk it and will get that new ones now.  Cost estimate for 6 Michelin tires:  $4000 including balancing and front and rear end alignment.

The last thing we are going to do is get an Air Force One to replace our Blue Ox Patriot braking system. We had some smoking brakes when we pulled out Kissimmee last week and now we don't trust the unit.
Cost estimate $1400.

Ugh…  the tires and braking system are not in the budget but we are going to go with it.

That should do us for upgrades and maintenance for a while hopefully.