Yes really...  We drove from Red Bay AL to Destin FL last week and stayed at the Army MWR Recreation Campground in Destin, FL.  We were looking forward to staying there because of our good impression last time.

It was raining and overcast for the first couple of days and in the middle of Friday afternoon Pam noticed a pool of fluid on the ground between the back tires. 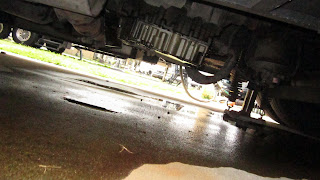 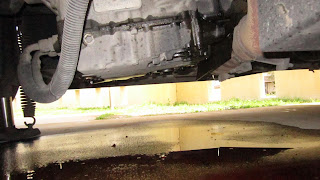 It was transmission fluid and this looked like a big problem.  Not much we could do on a Friday afternoon late in the day.  The main thing was not to panic and think through this thing…  We were in no danger so let's just figure this out and learn all we can in terms of how to deal with it.

We got up on Saturday, confirmed it was still dripping and thought we should tell the campground registration desk that we had a leak and we knew it and were working on getting it fixed.

The lady there gave us the name and number of the RV Doctor who was a local mobile RV repair guy. 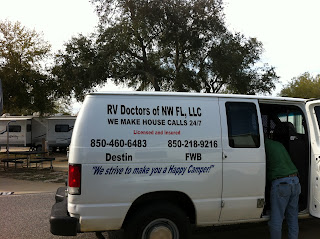 He came out and took a look but it was leaking around the transmission pan seal.  It was probably a job that was too big for him but he wanted to confirm it with his boss - Bob.  Bob and Mike came out on Sunday and confirmed it was transmission fluid leaking.   I paid them $40 for two onsite calls and made some phone calls.

The folks at the 1-800 Allison transmission/Cummins dealer in Panama City.  I kept getting promises of call backs but never talked with anyone that could help.  We found the nearest Freightliner dealer - NorthWest Florida Fleet Maintenance in Fort Walton Beach.  They turned out to be the answer to our problems. 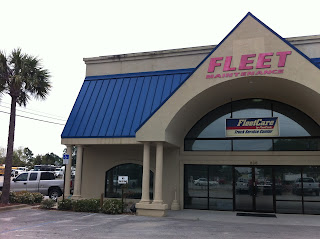 They diagnosed it correctly and had the facilities and expertise.  They suggested we take the 'pump drum' of transmission fluid back to our campground, top off what we had lost on the ground, and drive the Roadrunner over to their shop 12 miles away. 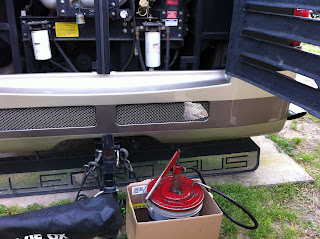 That is what we did without incident.

Next, we went back to cleanup of our site.  We got sand and spread it over the spill. 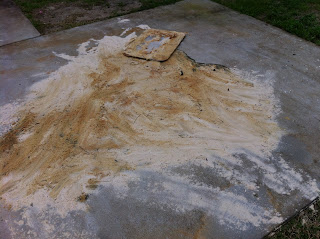 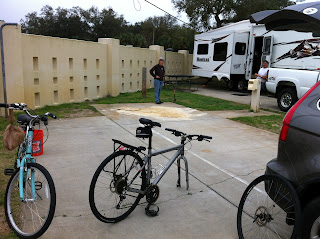 Then we went back over to the Freightliner repair shop and they indicated parts would need to be ordered. We got the parts on Tuesday afternoon and got into the Service Bay a little after noon on Wednesday.  It was supposed to be a 5 1/2 hour job so they thought the could get it done that day.

And they did.  It took them until almost 7:00 PM but we were glad they stayed late to do it. 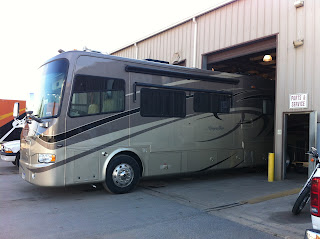 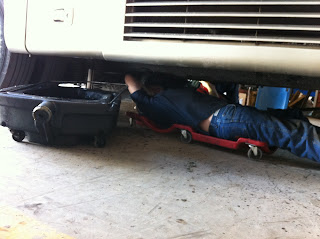 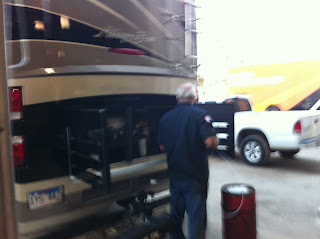 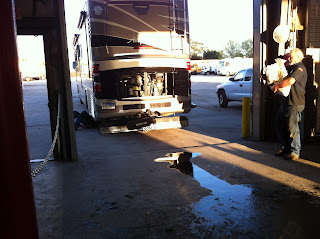 But looking back we were very satisfied with our time at Fleet Maintenance.  We met the owner (David) the first thing Monday morning.  He could not have been more helpful.  Then the scheduler Jerry was good and we also liked the mechanics that worked on the Roadrunner.  The folks let us stay two nights at the repair facility free of charge.  They quoted us a price on Monday morning and came within $100 of it,  told us they probably would be done Wednesday after the part came in and got us out of there though they had to stay late.   Generally they are what you call customer oriented excellent professionals.  And the kind of folks we highly recommend!

It has been a little while since we have done some night driving but we decided we wanted to get a couple hours under our belt and stay at a Rest Stop (on I-10) or a Walmart.

After we went about 120 or 130 miles, I stopped at two rest stops but they were small and full (I passed a couple of big ones with plenty of parking but didn't stop at that time…) and we decided on the Walmart at Mariana FL.  It was about 9:20 PM and we were tired.  We stayed at this same Walmart a few weeks ago when we were headed to Red Bay and it was fine. 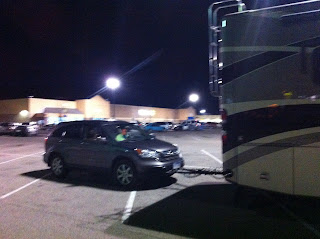 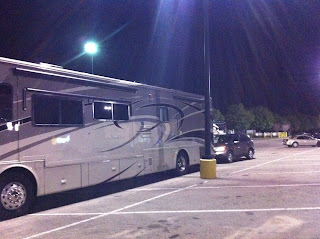 The next day we drove on to St. Augustine where we are going to be for a few days.  Glad the repairs are done (for a while).  Even though we had a lot of time in the shop there at Fort Walton Beach, we were able to do some shopping and sight seeing (another blog post?).  The area still has the whitest and best beaches we have ever seen…