The longer we are in the Roadrunner, the more things need attention.  As in replacement and / or fixing attention.
But that is not to be unexpected.   A premise I embraced early on in this adventure was "there are 3,000 moving parts on this coach and it is ALL going to break at some point."

So I am not surprised or frustrated by maintenance challenges when they pop up.  We are very pleased with our Tiffin Motor Home and still feel like it is one of the best values out there.

But about a month ago we noticed the water pump went out.  Pam turned on the switch and nothing happened.  Then we checked it out and sure enough it was dead.

We wanted to replace it ourselves.  I looked at the make and model number and called around to a few RV parts stores here in Albuquerque.  Then I shopped online and decided to order a replacement from American RV Company. 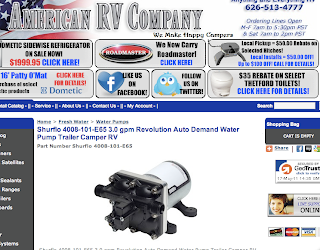 Once it arrived, we spent about 30 minutes replacing it.
First I turned off the water. 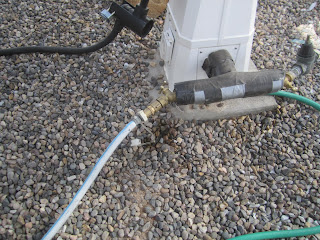 Then I removed the water filter so I could get at it. 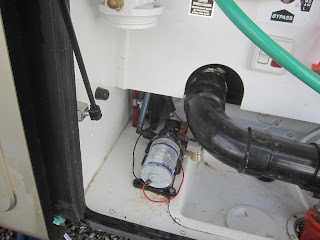 Next, Pam removed the fuse which is located under the refrigerator. 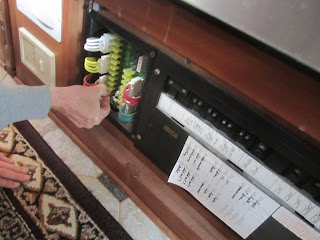 I got our my new DeWalt drill and found an extension Phillips head. 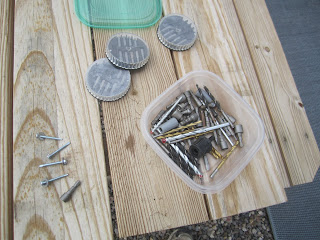 A few minutes later, I had the four screws removed.  I looked at the new pump and it has about 1/4 inch more of a rubber gasket on the bottom than the old one.  Because of that, I needed to put in longer screws. 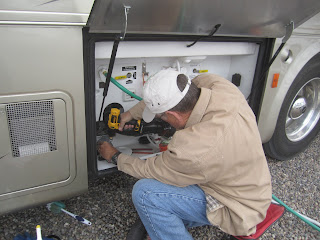 Next, Pam looked over the three connecting wires and carefully disconnected them. 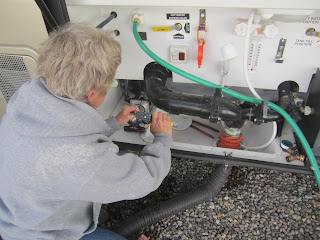 After I positioned the new one into place, Pam reconnected it.  Then I carefully replaced the four screws.  I turned on the pump and it was very quiet.  I thought - wow!  This is great, it is SO much more quiet than the old one.

Oops -
I forgot to turn on the water and make sure it was flowing through the pump correctly.  Pam confirmed the 3.0 gallons per minute (gmp) water flow inside.  It was still quieter than the old one, but only a little.  But it worked perfectly.  Success! 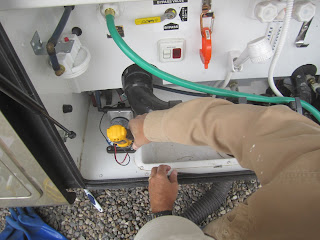 In a related replacement, we had three of the water pump switch lights burn out in the last couple of months.  I ordered replacements and a spare from the Tiffin Parts Department.  They arrived in a few days. 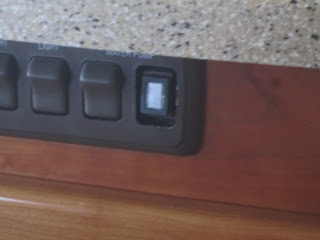 Pam popped off the top and figured out which side to attach and presto! 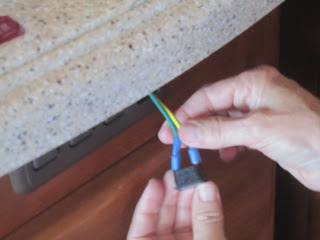 More success!  She did the same thing for the one in the bathroom and the one near the water pump in the wet bay. 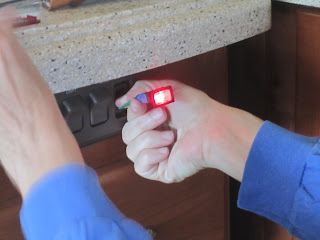 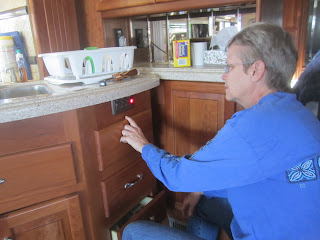 Even though this was a relatively easy repair, it helps us gain a little more confidence in what we can do.  For example, I have friends who have replaced toilets in the RV and it is something I think we could do on our own if we ever had to.  But I hope that doesn't happen since our toilet (expensive toilet) was replaced last year.

So we feel good about fixing up the water pump and replacing a few light switches.  Nothing like a little maintenance to put us in a good frame of mind.

Thanks for joining us today on the Roadrunner Chronicles.  We love hearing from you and appreciate those comments.  Keep 'em coming...

Until next time,
Posted by Roadrunner Chronicles at 9:59 AM