Getting Out of Harm's Way

We arrived back Virginia Beach on Sunday afternoon.  We got set up at the Ocean Pines military campground and then went over to see the kids.  Jon and Kelly and the boys were returning from a long weekend at the lake and they arrived in the late afternoon.

Wow!  We were gone 9 weeks and those little boys have changed so much!  They talk more and engage even more.  It is amazing.  We got to play with them on Sunday afternoon and then go see them all day Monday.

But the hurricane was building up and we had to come up with an evacuation plan of our own.  We called around and decided the best escape route was north to the D.C. area.  We called ahead to the Greenville Farm Campground in Haymarket, VA. 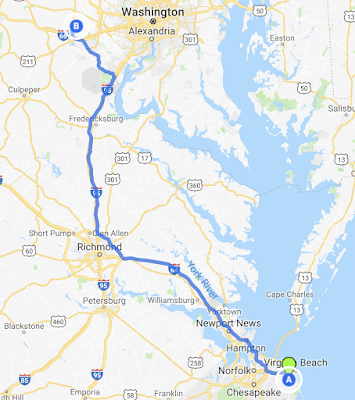 The D.C. area doesn't have too many great options for RVing (great meaning affordable, great campground and close to the city), but we've stay there and were able to snag a reservation.  We are about 30 minutes away from Fairfax and about 45 minutes from downtown D.C.

The weather reports were looking grim and the military campground had warned us we may have to evacuate.  We didn't wait for them to make up their mind and departed on Tuesday morning.  The drive to Fredericksburg on I-95 and then over to Highway 17 to Haymarket was actually a pleasant drive.  We expected heavier traffic but it was very manageable.

We got to the campground and were told we'd have to spend a night in partial hookups, then could move to full hookups.  So that is what we did.

Partial hookups were water and 30 amp service in the woods.  That meant no TV but we survived. 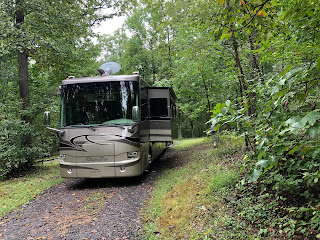 The next day moved to our more open site with full-hookups and our DirecTV had no problems connecting.

While here, we contacted friends Jeff and Tiffany.  Jeff and I met with a few of his other buddies on Tuesday night while Pam and Tiffany watched a Nationals baseball game and got caught up.  We are going to be able to spend some time tomorrow with son Adam and daughter-in-law Melissa (who live in Fairfax) and are looking forward to that!

We are glad the hurricane did not continue on its initial projected path and are safe.  Jon and Kelly in Virginia Beach got the all clear word earlier this evening.  They were never in an evacuation zone but parts of the city were.

Our prayers continue for the people in its path.  Even though the initial contact with landfall has been less than expected, there has still been plenty of devastation and it is not over yet.

I hope you and yours are safe!